With its best-ever tally of 303 seats out 542 in the general elections, Prime Minister Narendra Modi’s Hindu nationalist Bharatiya Janata Party has scored a landslide electoral victory in one of India’s most divisive elections. Modi triumphantly thanked his voters for giving him a “historic mandate” for five more years in office, and urged the world to recognise India as a great power. The Hindutva ideology has gained unprecedented ground and institutional support under the BJP rule. By putting the seal of approval on his Hindutva-inspired policies and posture, the majority of the Indian electorate has handed Modi’s BJP an emphatic mandate to rule India with enhanced constitutional legitimacy needed to reshape the state and society in tune with the Hindutva doctrine espoused by the BJP as its official political philosophy. 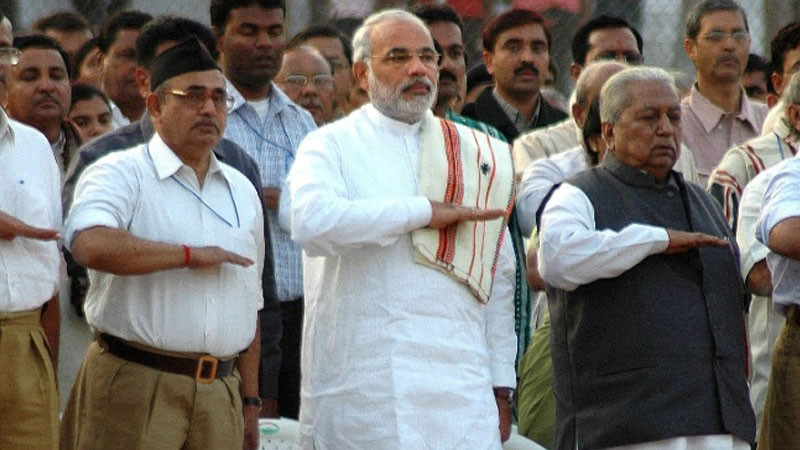 Today, with the BJP’s resounding re-election, Hindutva forces are bound to feel emboldened and justified to push aggressively with their domestic and geopolitical agenda. It is important to note that the geopolitical dimension of the Hindutva worldview remains overlooked by analysts and scholars who see the growing rise of Hindu nationalism merely as a political manifestation of Hindu religious fundamentalism or fanaticism. However, the ascendant Hindutva doctrine has a clear-cut geopolitical dimension and designs whose security implications for China are serious and realistic in the long run.

Arguably, it is China that India identifies as the real strategic competitor for regional supremacy and influence in Asia and beyond. Thus, a question of Himalayan proportions arises: what does the rising tide of Hindutva, energised by Modi’s landslide electoral victory, mean for China?

In order to gain insight into the geopolitical outlook and agenda of Hindutva, it is important to understand the doctrine of Hindutva. There is no consensus on a precise connotation of the buzzword ‘Hindutva’ under Modi. It may be described as a socio-cultural philosophy with Hindu religion at its heart. It seeks to promote a national identity inspired by ethos and epistemology of Hinduism. The exponents of Hindutva aim and strive for the ‘Hinduisation’ of the Indian state and society in letter and spirit.

The popularisation of the term is credited to Veer Vinayak Damodar Savarkar in 1923. Presently, the Hindu nationalist outfits, notably, the Rashtriya Swayamsevak Sangh and the Hindu Senaand Vishva Hindu Parishad, champion the concept. The ruling party BJP is viewed as the political offshoot of the RSS that sees BJP as the vehicle for materialisation of its Hindutva agenda with its domestic and geopolitical orientation. Tellingly, Prime Minister Modi remained an active member of the RSS serving as its long-time pracharak (propagandist) before his to rise to power politics.

The grand objective of an ‘Akhand Bharat’ constitutes the cardinal component of the geopolitical dimension of Hindutva that has found a fertile ground now, as the geopolitical outlook of Hindutva has begun to crystalise and manifest itself into the so-called muscular foreign policy of Modi. The classical version of the territorial notion aimed for the physical assimilation of Bangladesh, Pakistan, Sri Lanka, Bangladesh, Nepal and Bhutan, viewed as the integral part of the Indian ‘fatherland’. The founders of the Hindutva ideology asserted that the Indian natural borders stretched from the Indus to the Eastern Sea, and from the Himalayas to Kanyakumari. Since the physical integration of South Asian states into the Indian Union sounds like an unrealistic proposition, the BJP has devised a softer and more plausible version of the geopolitical agenda of the Hindutva ideology.

Modi seeks to implement the ‘neo-Akhand Bharat strategy’ that is premised on the idea of creating a ‘United South Asian Strategic Space’ as an exclusive sphere of Indian influence. In an interview to Al Jazeera in December 2015, Ram Madhav, BJP general secretary, said that they hoped to create a ‘Great India’ that would include India, Bangladesh and Pakistan. The improvised Akhand Bharat blueprint of the BJP carries the seeds of heightened tension in the Sino-India relations in the long run because the strategy entails countermeasures to the growing Chinese geo-economic inroads and geopolitical influence in the region, and that is of vital importance in the geopolitical calculus of the Hindutva doctrine.

The Sino-Pakistan strategic partnership is considered detrimental to Indian regional dominance. Indian strategic planners view Pakistan as a China proxy, and a big hurdle in the way of the absolute Indian hegemony in south Asia. India is critical of the China Pakistan Economic Corridor, as the mega project undercuts Indian capabilities by boosting Pakistan’s geostrategic value and geo-economic significance. A greater Indian military pressure on Pakistan will motivate Beijing to further deepen its strategic ties with an Islamabad opposed to the Indian supremacy in the region. Emboldened by economic growth and US appeasement, India has taken a strategic decision to solve its ‘Pakistan problem’ by a multi-pronged strategy based on aggressive policy and posture. Such a policy is bound to exacerbate the conflict between India and China, already locked in border disputes.

As reflected by the assertive Indian position during the eyeball-to-eyeball, 73-day standoff on the Doklam plateau in 2017, New Delhi seems to have broken with its ‘strategic restraint’ policy vis-à-vis China. Disregarding the strong Chinese opposition to his visit to the eastern section of the Sino-Indian border, Modi laid the foundation stone for a new airport development at Hollongi in Parum Pare district of Arunachal Pradesh in February 2019. The airport is a part of a number of strategically vital infrastructure projects of rail and road connectivity viewed as a part of the proactive Indian policy to shore up its offensive and defensive military capabilities in the disputed region. The robust policy posture towards Beijing is palpable indicator of the unfolding paradigm shift in New Delhi’s traditional approach towards its Asian arch-rival.

Hindutva’s geopolitical worldview draws inspiration from realism underpinned by the anarchic nature of international relations. It favours a world system based on great powers and sovereignty with war as an integral part of the international system. The BJP extols military power and its projection. National security was the rallying cry during Modi’s recent election campaign.

Seen in this perspective, the rationale behind India’s rapid military modernisation and quest for blue water navy becomes crystal clear. Modi wants to transform India into a great military power to change the rules of the game in her immediate neighbourhood. Hindutva’s emphasis on realist paradigm means selfish pursuit of national interests that pits India against China in the region and beyond as force takes precedence over morality in the ideology.

Hindutva firmly holds onto the Indian exceptionalism by projecting India as a civilisation-state – a great pole of power in a multipolar world order. According to Savarkar, the civilisational uniqueness lends India a morally and spiritually superior approach to international affairs. The approach is emulable, especially in South Asia connected to India by historical and cultural legacy.

China, on the other hand, does not subscribe to the Indian exceptionalism that seeks to curb the Chinese clout in the region, a facet of which is its Belt and Road and Initiative.

Despite the US-India Civil Nuclear Agreement of 2007, the Congress held onto ‘strategic autonomy’ and was reluctant to be sucked deeper into the US strategic embrace. The Indo-US strategic partnership has assumed a new dimension and significance under the BJP whose policy planners seem convinced that deeper engagement with Washington is key to unlocking the great power status for India. The US has found a willing partner in Modi. In 2019, Donald Trump signed an act to enhance America’s footprint in the Indo-Pacific area, fortifying multi-vector ties with India. The law reaffirms the US strategic commitment to the New Framework for the 2005 US-India Defence Relationship, Defence Technology and Trade Initiative 2012, Joint Strategic Vision for the Indo-Pacific and Indian Ocean Region 2015, and Joint Statement on Prosperity Through Partnership 2017.

The US grand strategy marks China as the greatest challenger to her global predominance in the long run. To contain China, Americans wants to prop up India as a strategic hedge against Beijing. The deepening Indo-US partnership is a cause of grave concern to Beijing and is emerging as a major driver of conflict between the two Asian giants.

Illustrated by the previous five-year rule of the BJP, the prioritisation and projection of national security in India has a geopolitical dimension emanating from Hindutva tenets. The landslide electoral win shall add more wind to Hindutva’s sails. This means that China’s tryst with Hindutva’s geopolitical agenda is inevitable. Expect increased bellicosity between the two countries with divergent interests and discordant worldviews. The rising Hindutva is destined to meet the growing Chinese nationalism.

The writer is a PhD scholar at the National University of Modern Languages, Pakistan