Forgotten Women: The displaced Syrian mothers still fighting for change – who say ‘I want you to feel our suffering’

Seven years into a civil war that has left devastation in its wake, campaigns and aid are beginning to dry up in Syria. The suffering of those still facing untold hardships fades from public view as the world moves on to the latest crisis.

Thousands are still displaced, living with limited access to basic necessities such as food, electricity and fuel. Unknown numbers are detained or missing.

Many of those left behind are women doing what they can to support their families, often mourning the loss of loved ones. Even though there are fewer battlefields, fighting continues, leaving civilians in mortal danger. The message from women in Syria rings clear: “I want you to feel our suffering.”

Nivin Hotary, a 38-year-old mother of two and former project manager and teacher, was displaced seven months ago to the Aleppo countryside by the Assadregime’s siege of eastern Ghouta.

Her former life “surrounded by close friends and family” was suddenly uprooted when Ghouta was besieged in 2012.

She says: “The hardest moment during the conflict was when a bomb would be dropped near my house and I wasn’t able to protect my children, even though I was holding them tight in my arms. I used to wish that my body was bigger and stronger to protect them from harm.”

Years later, her children now six and 12 years old, Nivin still has memories of “a weird smell in the air”, which she says she “knew was due to chemical weapons”. When the airstrikes hit, Nivin and her family would be forced to hide underground. “I’d have nightmares about my children being unable to breathe,” she adds.

The fears that come with being a mother displaced by war continue to shake Nivin’s life.

Her family now lives in Azaz, a town in the northern Aleppo countryside. But her new life is still full of complications and fear is never far away.

“Although I live in a rented house and not in a camp, which is a privilege here, every night I suffer from feelings of instability like every displaced person,” Nivin says.

“There are no guarantees for the safety of those who want to return, and the regime continues to arrest returnees. The number of forcibly disappeared people in its prisons remains high.”

Nivin adds: “When we were displaced, my daughter would ask me about the different kinds of foods she saw at the market.” That’s because she had lived all her life under siege in Ghouta, and had never seen many of the goods for sale.

But things are tough. “International aid to local organisations has begun to dry up,” Nivin says. “The cost of living is very expensive here, with few job opportunities.”

51-year-old Ahlam – who could not give her surname because she fears for the safety of her son, who is detained by the regime – lives in Idlib. The province is now believed to be home to three million people and is one of the last areas of Syria outside the regime’s control. About half of the Idlib population have been displaced there from other parts of the country. 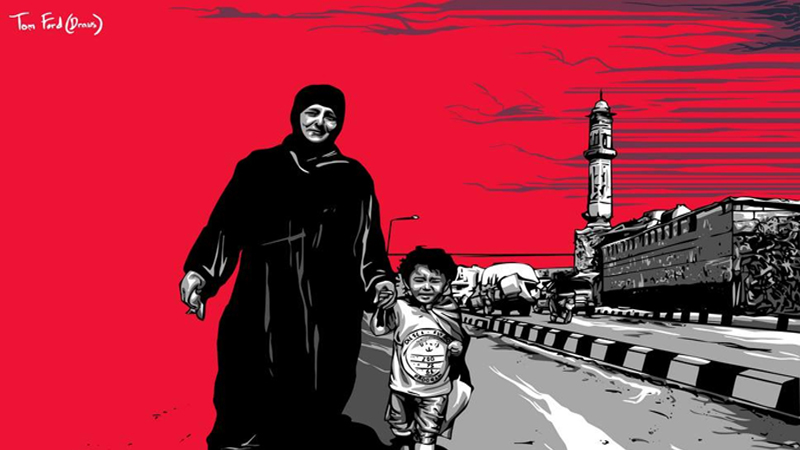 Ahlam, a former maths teacher, and her husband, a former surgeon, have four children and several grandchildren in Idlib city. They used to live a busy, happy life, but when the fighting began, Ahlam says “no voice was heard but the voice of weapons”.

Common to many Syrian parents, Ahlam’s sons were taken, a subject she struggles to talk about. “My two sons were kidnapped by the regime’s military intelligence,” she says. Through tears, she adds: “Two days later my third son got arrested too during a protest at his university. Can you imagine losing your three sons within two days and not knowing their whereabouts for days?”

Two of her sons were released within three months and now live in Idlib, but her oldest has been in detention since February 2012. “I still don’t know his fate,” she says.

The economic situation is dire in Idlib. There is a lack of jobs, while medical equipment and drugs are scarce. Many are waiting for humanitarian aid – which there is simply not enough of. Ahlam says that this high poverty and desperation has led to a rise in kidnappings for ransom money.

In these challenging areas, it is women who are so often carrying the weight of responsibilities – and they want to be heard.

Muzna Aljundi, 30, was a technical engineer and is now the manager of Women Now for Development in Idlib, a civil society organisation aiming to empower women in the northwest.

“Of course war has a large effect on women, particularly psychologically in terms of causing depression and anxiety,” Muzna says. “Losing their husbands can make women more vulnerable as they have to provide for their children on their own.” The mother of two adds that women make up 60 to 70 per cent of the population in opposition-held areas, so “empowering women to play their roles and make use of their capabilities is very necessary for the whole community”.

Muzna’s home village was bombed for days when it was being liberated from the regime. Her family would go out to help distribute food baskets to people in need, despite the risk of bombs.

“I believe that the revolution is not over,” she says. “Our role as civilians and activists starts now.

“I look back at the days I had to live under fear of bombing and siege, and although it was the hardest time of my life, it really made me see life differently and definitely made me much stronger. My experience gives me a reason to wake up and go to work everyday because I want to help make positive change.”

The world may be starting to forget about Syria, but these three women demand to be heard, and they will not wait for change – they will orchestrate it.

Ahlam, who despite the detention of her son continues in local activism and works with NGOs, says: “My message to women everywhere is: I want you to feel our suffering, and to call your governments to remind them that there are millions of innocent people in Idlib and everywhere in Syria who deserve to live in freedom and dignity.”

Displaced Nivin is now the director of the Women’s Empowerment Unit, a civil society organisation that helps provide women with the training and tools they need, encouraging them to play bigger roles in decision-making in their communities.

Communities in Syria have seen high numbers of women continuing to get an education, despite their age or the war. “When the revolution started, there was a lack of expertise and qualifications among women, but then the war pushed them to work harder and improve their skills,” Nivin says. “I’m surrounded by courageous women. We have hope that Syrian women will help build a better Syria, just like German women did after the Second World War.”

Nivin adds: “I hope you hear our voices. I’m one of many mothers who decided to join the revolution because I didn’t want my kids to live the same way I did, to live under the control of a corrupt regime. I hope that you won’t let the decision makers, who let us down for their own politics and interests, affect the way you think of us.

“I hope that you will stand in solidarity with us if you do believe in our rights to offer our children a better life, to live in freedom and dignity and to have a Syria for all.”