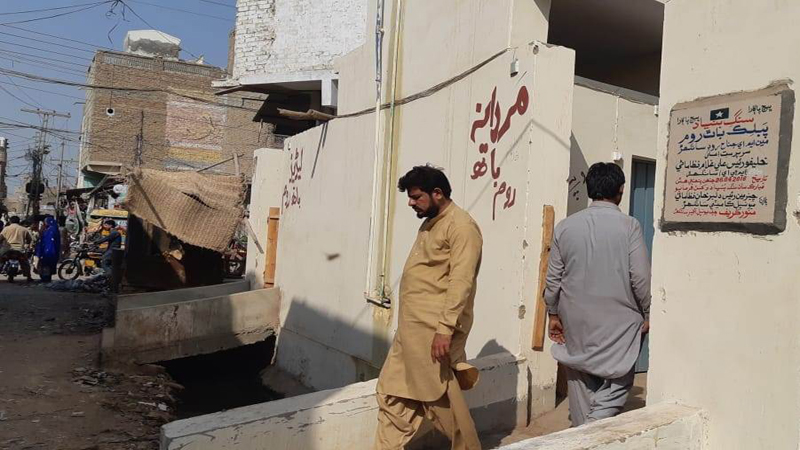 Sindh’s mineral rich Sanghar district is in grips of a sanitation crisis even as the world celebrates ‘World Toilet Day’.

World Toilet Day is an official United Nations (UN) international observance day which is celebrated on November 19 every year to inspire action in tackling the global sanitation crisis and raise awareness in the public about hygiene and sanitation.

Pakistan is the seventh worst country in terms of access to basic sanitation and 42 percent of its population does not have access to basic sanitation facilities. According to a report, 79 m people do not have proper toilets and 37 percent of the country’s population has no system to rely on for wastewater disposal. Contamination of water and contact with human waste causes diseases to spread.

Sanghar, district headquarter caters to 2.057 million citizens residing in six talukas (sub-districts). Sanghar city itself has a population of 272,000. Sanghar is known as the ‘energy basket’ district since it produces oil and gas which are used to meet the country’s requirement. Sanghar is also one of Pakistan’s leading cotton producing district and its produce is indispensible to the export sector.

An urdu sentence written in front of Deputy Commissioner Office translates to “Parking along with DC House office is prohibited. Urinating along with the wall is strictly prohibited.” However, Sanghar deputy commissioner Nisar Memon was not available for comment.

Shopkeepers and vendors in city’s bustling business centers criticise market committee for its failure in provision of potable water and toilets to the main commercial hubs.The market committee’s function is to regulate marketing of fruits and vegetables to safeguard interests of traders, growers and exporters.Sanghar’s vegetable and fruit market, which attracts around 5,000 people daily including vendors, growers, traders and general public, also does not have public toilets. According to Sanghar New Vegetable and Fruit Market Association president Iqbal Yousafzai, the market committee responsible for controlling business centers in the city has not provided toilet facilities at public hubs for business. He said that the market committee generateda considerable revenue from economic activities but had failed to construct toilets. “Besides locals, Sanghar also attracts traders from other provinces for chili, mango and other commodities. There is dire need of public toilets for market,” he added. Yet another business center that lacks toilet facilities and is often heavily crowded is the city’s cattle market.

Out of the 50 public and cargo transportation stands in the city, none have restrooms. It is estimated that there are around thirty-thousand passengers who commute from and in Sanghar, out of which 10,000 commute through public transport. Lack of basic toilet and sanitation facilities at these kiosks and stands causes great inconvenience to passengers, especially women. Kukoo Bai, a sixty-year old lady who has been running a stall at Khipro bus stand since the last forty years is a resident of Shahmeer colony which is located in the city’s suburbs. She told Daily Times that she waited the whole day to relieve herself when she got back home. She said that absence of public toilets inconvenienced women the most. “Having no toilets in public spots is problematic for both men and women but men still manage to relieve themselves. Where can the women possibly go in such a situation?” said Bai. “So we wait till we go back home,”

According to Ghulam Mustafa Tareen, a local van transporter, the major reason behind the non-provision of facilities is that none of the public transport stands are legal. He anow it was non-functional. “All transport stands are illegal. Administration of these stands receive fee from every vehicle but does not provide basic facilities such as drinking water and toilets,” said Tareen. “When nature calls, people go to restaurants, religious places and filling stations which have toilets. Some people do not even go to public toilets because they are unhygienic. Instead, they relieve themselves in open grounds,” he explained.

Collection points at Benazir Income Support Programme (BISP), the country’s largest cash transfer program for poor, also do not have basic toilet facilities. A large number of district’s BISP beneficiary women gather to receive their allocated funds at these authorised points, every three months. Moreover, not even one of district headquarters eight units have public urinals.

Health experts like Dr Haadi Baksh Qureshi stress on the importance of proper and hygienic sanitation facilities. “It is estimated that up to five million people die each year from preventable waterborne diseases due to inadequate sanitation (WHO). Most of the affected are young children below the ages of five and women and girls,” says Dr Haadi.

Majority of the healthcare facilities in Sanghar city also do not have washrooms. Doctors, who often preach about better health facilities often fail to provide these facilities in their own clinics. Dr Lajpat Rai Jee Soni, who runs a private ultrasound center, defends his healthcare facility having no public toilet facility. His facility is visited by patients coming from far-flung areas. “I have rented this place so I cannot change design of the building. In case of emergencies, we simply arrange makeshift toilet facilities in a nearby place,” he says.

Sports grounds also lack public toilets by and large. City’s major cricket ground which comes under the control of Pakistan Cricket Board (PCB) arranges toilet facilities for players only if they pay match fees during tournaments. According to Jabbar Yousafzai, the in charge of Sanghar’s PCB ground, there are seven washrooms in dressing and umpire rooms but water supply there is often disconnected. “Toilet facility is not for players who come to play out-of-tournament matches. Also spectators are not allowed to visit the dressing rooms so obviously they cannot use the toilets,” Yousafzai adds. There is also no toilet facility for people coming for jogging or walk in the PCB stadium jurisdiction.