‘We don’t have much time’: Rafay Alam on Pakistan’s environmental problems 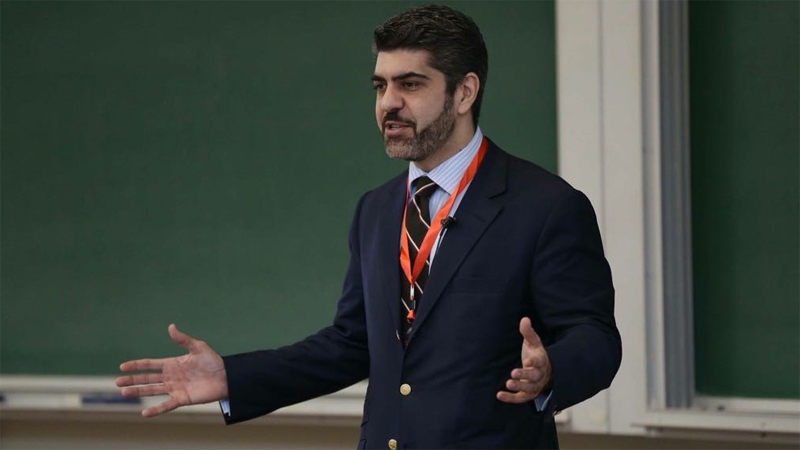 Rafay Alam is an environmental lawyer and activist. He studied law at the SOAS University of London and has the prestige to be a ‘Yale World Fellow’.

Apart from his profession, he leads a group of passionate cyclists at ‘Critical Mass Lahore’ and uses the platform of ‘Lahore Bachao Tehreek’ to safeguard the issues related to Lahore. He writes and delivers lectures about environmental issues and has numerous publications to his credit. I had the privilege to sit down with him and have a fruitful conversation.

How did it all start?

“In 2005, I found myself in Café Nairang in Lahore in a room full of people who were trying to stop the trees on the canal from being cut. Numerous proposals were being put forward and various steps were being taken; the bureaucrats were called (to get them on the board), trees were hugged and press conferences were considered.  The minute movement grew tall and is now known as the ‘Lahore Bachao Tehreek’.

As the only lawyer in the room, I was tasked to ‘find some law’ that could help the effort.  That’s how I stumbled across the Pakistan Environmental Protection Act and as luck would have it, when the Tehreek (movement) did approach the Lahore High Court, it turned out the environment law was a major argument in our favour.  The entire episode gave me my first exposure to environmental law, and I saw a great opportunity that was waiting to be tapped!”

What environmental issues are we facing?

On the aforementioned question, Rafay glanced towards the ceiling, paused for a few seconds and then exclaimed “Pakistan faces a number of environmental challenges! It deserves a very long answer but let me give you a broad theme – Pakistan is very vulnerable to climate change!”

Rafay started by defining the concept of climate change. “During a ‘climate change’, unexpected and unprecedented changes occur in normal weather patterns”. Rafay pointed out some recent examples “Last year, there were three category 5 hurricanes that hit the mainland of the US – it has never happened before according to the history.” Then Rafay drew our attention towards similar happenings around this region. “Recently, floods have occurred in Bangladesh, Nepal and nearby areas where thousands suffered and got perished.”

“Pakistan is also being affected by this climate change,” Rafay exclaimed, pointing out there had been flooding almost every year since 2010. “As if this wasn’t bad enough, at the same time, we have industrial pollution, our air is polluted, the water is impure, sanitation is a concern in rural areas, and pesticides used in the farms are creating agricultural pollutants”. How much of an impact is this having on Pakistan? Rafay cited a quantitative assessment to explain: “The Word Bank estimated that on a monetary basis, Pakistan was losing approximately a Billion Rupees in a day – almost 6 billion US dollars a year – due to environmental related issues such as pollution.” To make such an alarming estimate understandable, Rafay cited a few examples “For instance, thousands of deaths occur due to air pollution in Pakistan. Furthermore, almost 50% of patients in government hospitals are estimated to be suffering from water borne diseases as a result of impure drinking water.”

Sitting in Lahore, the next concern was “Where is Lahore heading in this regard?” Rafay twisted his lips and then put his hands on the desk before starting to speak “I don’t think we are managing Lahore – It will take a Herculean effort to do it. Although, I do hope we will be able to do it (in the future)”, remarked Rafay with a feeling of disappointment together with a ray of hope.

He continued “The issues of large cities like Lahore are different than the rest of Punjab and Pakistan. For example, 6000 tons of waste is generated per day in Lahore that goes to the landfill. Around 500 trucks and 13 000 people – working for two shifts – are required to manage this. A 7-year contract given for this project has nearly cost around 450 million dollars. In comparison, Sialkot merely produces 250 tons a day for which we need around 600 people and 12-15 trucks to look after it. Similar is the case with cities like Sahiwal, Bahawalpur and likewise.  Don’t let the scale of challenges in our large cities fool you into thinking that all our problems are of similar scale.  They aren’t. Many are still manageable.”

Causes of environmental issues in Pakistan

As the list of environmental issues started becoming disturbingly large, Rafay was asked “What steps have been taken to address these issues?” Rafay began by recapping the history of Environmental law and its affiliated ministries in Pakistan “Environment has not been a concern in Punjab as late as the 1960s. It was a rich agricultural land. The issues have accumulated over the recent 10-20 years in an acute fashion. The EDP (Environment Protection Department of Punjab) was founded around 1987.” Thereafter, Rafay mentioned some of the miscalculations that were made at various levels and stages while addressing the environmental issues, throughout these years, as a result of which “The institutions that we have to respond to these challenges are outdated”, Rafay regretted.

However, there are certain things going in the right direction and Rafay recounted that environment assessments would be hardly conducted a while ago but now there are thousands of such assessments being carried out. “The Punjab government is restructuring environmental policies and I am a part of it – we have reviewed working of the EPD. However, we are working for the first time on this scale so we can make mistakes as well”, Rafay admitted. He continued on to mention that apart from the government initiatives, movements like ‘Lahore Bachao Tehreek’ have also raised many issues thereby contributing to significant changes in the recent years. “A lot is being done but the dilemma is that we don’t have much time,” Rafay warned in an anxious tone.

What is the ‘Critical Mass Lahore’ about?

“Is there a relation of cycling with the environment?” the course of the interview was turned towards Rafay’s passion for cycling. Rafay smiled and raised his clenched hand to proclaim “Cycling is my politics.” He continued “Democracy is not just about casting votes. It’s about streets.” Pointing towards our urbanizing cities, he observed “If we look at our roads, we have a green area and then a road. We don’t have a space neither for the side walkers nor the cyclers. The roads have just been planned for the cars. Road is an infrastructure resource. DHA, the richest area in Lahore, doesn’t have a single sidewalk. Furthermore, we don’t have public spaces such as parks.” After a brief pause, Rafay waved his hand to exclaim “We shouldn’t have roads and infrastructure where we become sick. We should have transport and mobility to make us safer and healthier,” Rafay’s voice resonated across the room.

Rafay was now asked what was the cycling club ‘Critical Mass Lahore’ about and what did this fancy sounding name mean, to which he explained “When 25-30 cyclists gather, they make a critical mass. It is necessary to take the roads from the cars.” Rafay thereby reminded us about the ‘hegemony’ of cars over the roads. “There are ways to create roads that create different modes of mobility, including cyclists, in the same budget”, Rafay claimed.

The Importance of ‘Social Infrastructure’

“Along with the hard infrastructure, we also need the ‘soft’, or the ‘social’, infrastructure. At present, nearly 80% of global GDP comes from the cities. In order to participate in the global GDP and to participate in the international trade and transactions (which is mostly done through cities that are sometimes referred to as the “global cities”), we need to have centers for education, a good and healthy environment and certain places for the recreation”. Then Rafay looked up and raised his finger to exclaim “If you want the smart people to come and work for you, you need to cater for their needs and desires.” Citing a personal example, he observed “Gujranwala has a huge steel industry but one of my friends from there moved his family to Lahore. When asked, he explained that Gujranwala doesn’t have good education facilities. So you need to provide the smart people with excellent public facilities for them to stay and work in the city.”

How far can an individual make a change?

Rafay moved on to point out some other and less considered aspects of environment wherein an individual can equally play a role to make a change. He pinched the sleeve of his white shirt and said “This shirt, that I am wearing, would have consumed numerous resources for its production, including almost 6000 liters of water for a field of (required) cotton to be grown. So do I have to buy a new shirt on every occasion?  Similarly, it takes around 15000 liters of water to produce a kilo of beef.  Do I need to eat meat every day?”

When asked about how his experience has been as an environmental lawyer, he promptly replied “It’s been fun and challenging. One thing that I felt about law is that you always wake up feeling stupid because you have to learn and read something every day”. He also made a grim assessment ‘Our law is practiced more in the breach than in the observance’. When asked how he sees ‘environment law’ as a career for the youth, Rafay claimed that studying environmental law, for the youth, can hopefully enable them with an increasingly wide scope.

When asked how the common people can gain knowledge about the environmental issues, Rafay pointed towards his iPhone and exclaimed “Nowadays, you can find everything in this. If a person from a hundred years ago or so would come here and ask that what is in this (smart phone), we will reply ‘It has everything’. If he asks ‘Okay, What do you do with it?’ we will reply ‘We watch vines,’” Rafay smiled ironically, hinting towards the ‘priorities’ of our generation.

At the end, when asked if he is able to balance his busy life and ‘activism’, Rafay praised his supportive wife and proclaimed “You are very lucky if you have a supportive partner.”

The interview was arranged at Lahore University of Management Sciences (LUMS) by Mrs Nyla Daud, who along with other faculty members and students, participated in posing the questions.

Syed Talha Shah has studied Medicine (MBBS) from Ziauddin University (in Karachi, Pakistan) and takes interest in a number of other issues including environmental and social issues. He can be contacted via Twitter @DrSyedTalhaShah