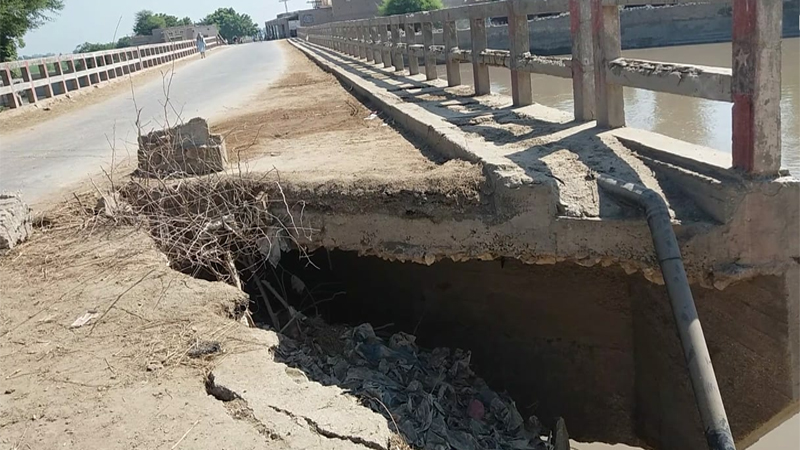 LARKANA: A collapsed section of a bridge constructed over Dadu canal a couple of years ago poses a serious danger to commuters and residents of Baggi village near Mohenjo Daro while travelling across the bridge.

Reportedly, five-foot dilapidated section of the bridge awaits attention from the provincial government of Sindh.

The residents complained that neither elected politicians nor irrigation authorities attempted to address their grievances despite the fact that they were approached by them several times.

They alleged that substandard material was used in the construction of the bridge which could totally collapse anytime.

The bridge interconnects Badah, Mohenjo Daro and Radhan towns and many adjoining villages.

Meanwhile, villagers including Rustam Bhutto, Ghulam Channo and others organised a demonstration in front of the Moheno Daro press club on Friday and appealed to the concerned authorities to repair and renovate the bridge immediately.

They revealed that several motorcyclists were injured because they were unaware about the damaged side of the bridge.

Members of civil society, friends and relatives of two missing persons on Friday held a demonstration at Jinnah Bagh roundabout in Larkana to express solidarity with the families of the missing persons.

The protesters said that he was a law-abiding citizen and expressed concerns over failure of law enforcement agencies in his recovery.

Meanwhile, protesters also demanded recovery of Muhammad Rafique Umrani and claimed that he was whisked away while working at a tailor shop in Nazar Muhalla on Sep 8.

They appealed to the government and the Chief Justice of Pakistan (CJP) to take pragmatic steps for recovery of the missing persons as early as possible.

The protesters were holding banners and placards inscribed with demands for early recovery of the missing persons.

They also chanted slogans in support of the affected families and against the forced disappearances.

Custodians of famous shrines in Sindh including Pir Abdul Ghafar Jan Naqshbandi of Pir Mitha Sain, Makhdoom Nadim Ahmed Hashmi of Khuhra Sharif and Shafi Muhammad Mashori of Mashori Sharif on Friday denounced constructions of all dams which are proposed to be built on the Indus River including Kalabagh, Diamer-Bhasha and Mohmand dams, and issuance of Computerised National Identity Cards (CNICs) to aliens and illegal immigrants.

They urged the federal government to send refugees back to their homelands and claimed that Pakistan could not bear their expenses and burden, particularly due to regional insecurity and crimes.

“Indus River is the source of livelihood for more than 60 million people in Sindh, and constructing dams on it would imply killing them,” they said, adding that poverty, water scarcity, unemployment, poor healthcare and education system, and famine have multiplied sufferings of residents.

“Pakistanis are not given Saudi citizenship despite of having same faith,” they said, adding that they would continue to oppose constructions of dams on the Indus River.

They said that ineffective policies of rulers have put country into turmoil and hardships while measures were required on the priority basis to protect rights of citizens.

They warned the federal government to refrain from building dams on the Indus River or otherwise, they would launch protests across the province.