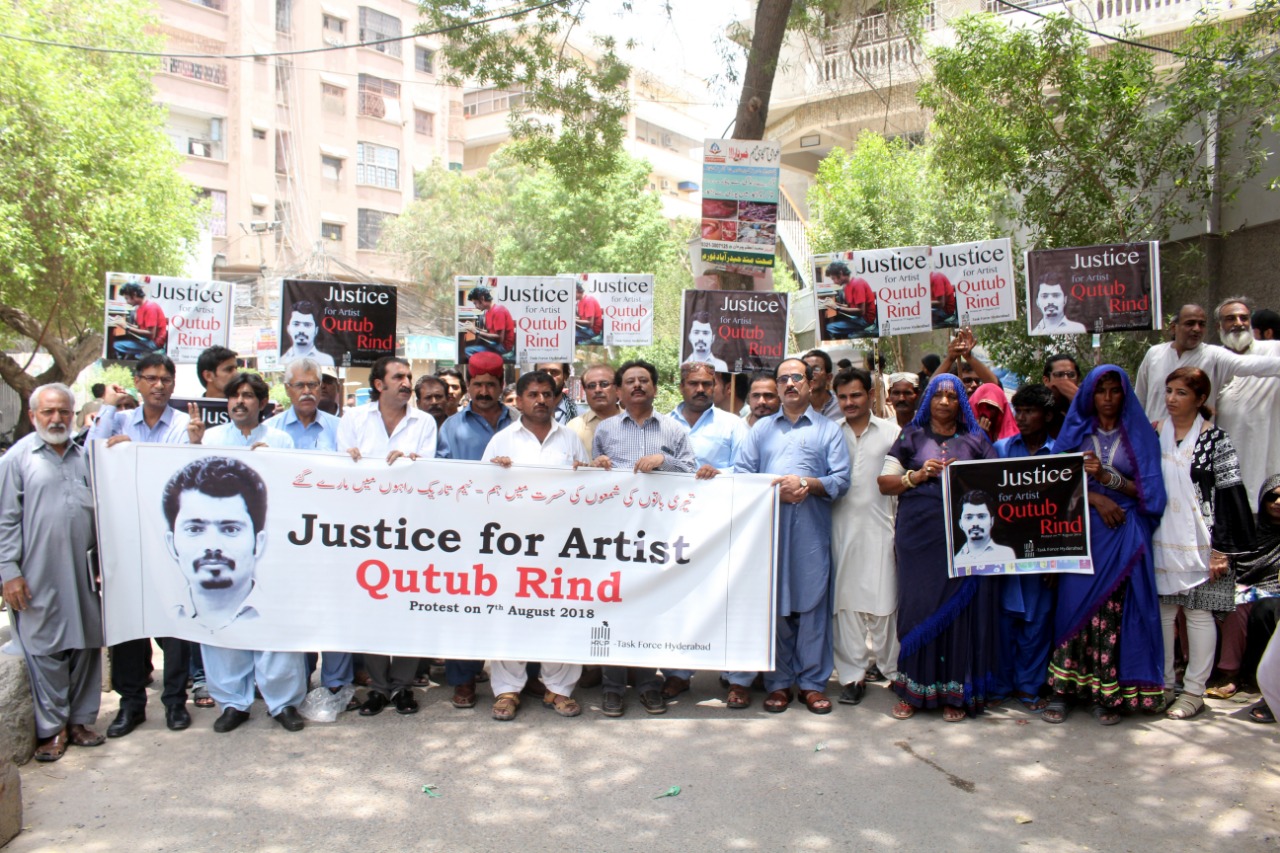 A large number of peoples attached with different walks of life demonstrated a protest in Jaccobabad against the brutal murder of Pakistan’s renowned artist and position holder graduate of National College of Art [NCA] Lahore, Qutub Rind, on Tuesday.
Rally started from Shaheed Allah Bux park and walking through different roads of the city culminated at the press club.
The protestors were chanting slogans against the police and the Punjab government.
Qutub’s uncle Gul Baig Rind, Qutub’s fellows, lawyers, and human rights activits pariticipated in the rally.
Addressing the gathering at press club, protestets rejected all reports claiming ‘dispute on rent, murder for Rs 120 or blasphemy’ as cause of the murder.
They demanded a joint investigation team [JIT] be formed to investigate the case so that fair trail could be conducted and the real facts could be known.
A similar rally was held in Hyderabad in which Human Rights Commission of Pakistan (HRCP) task force, artists and civil society persons participated to protest against the brutal killing.
Speakers during the rally said the murder was purely of criminal nature saying cofusing the murder with religion, addiction or any other conspiracy theory would be dangerous.
They urged Punjab police to handle the case on ‘legal, lawful and humanitarian basis’.
The brother of artist Qutub Rind, Muhib Ali Rind, participated in the rally.
Also read: Former NCA student murdered by landlord over rent issues

The police have also registered a case against the house owner Ahsan on the complaint of deceased uncle’s Gul Baig Rind. Sanda station house officer said that Qutub Rind lived in the third storey of a rented house owned by Ahsan in Premnagar Sanda area.

He said that both quarreled over some house rent issue on July 17, 2018 where the accused person tortured him and later threw him down the third floor, as a result of which Qutub received multiple injuries. He was rushed to a nearby hospital where he succumbed to his injuries. Sanda police said that the accused has been arrested as well and a case of murder has also been registered against him under section 302/34.

It is pertinent to mention that the news of Qutub’s murder surfaced on local media through social media after more than 20 days which left several questions behind. However, the family member of Qutub have claimed that he was killed under false charge of blasphemy on July 17 through social media.

They added that Qutub rented a studio apartment in Premnagar Sanda area and had an altercation with the landlord. Later at night, the landlord along with two others broke in his studio, broke his limbs and then threw him off the third floor. Qutub passed away owing to excessive blood loss and lethal injuries.

Qutub’s friend Hamid Ali claimed that the suspects confessed to the killing on reasons of blasphemy. When the police of Sanda station caught the suspects, they confessed to it but later changed their statements, he claimed. The family accused officials at the Sanda Police Station of not cooperating and covering up the incident.