Drone attack: stop it before it turns ugly

A diplomatic row broke out between Pakistan and the US over the latest US drone attack on an Afghan refugee camp situated near Hangu, Kurram Agency. Both sides publicly rejected each other’s claims about the actual target. Pakistan challenged the American government’s claims that a Haqqani network commander, along with his two accomplices, was hiding in what they called a ‘terrorist sanctuary’ in Kurram. Pakistan insisted that the predator attack actually hit the Afghan refugee camp as there exists no sanctuaries inside the Pakistani territory.

In an unusual move, the American embassy in Islamabad issued a statement, and rejected ISPR’s claim as false. This prompted the Inter Services Public Relations to issue a quick rebuttal, saying the “drone strike on January 24 in Spintal, Hangu district, was on an individual target who had morphed into Afghan refugees and not any organised terrorists’ sanctuary which have been eliminated.”

The statement claimed that the presence of militants in the refugee camps validates Pakistan’s stance that leftover terrorists easily morph into Afghan refugee camps and complexes. “Thus their early and dignified return to Afghanistan is essential. Pakistan’s brotherly hospitality to peaceful Afghan refugees must not be exploited by the terrorists.”

This drew criticism from the Pakistani print as well as electronic media which said that the strike must be seen as the first attack from the US after President Donald Trump’s 1st January threatening tweet.

It said that the US would take a unilateral action against Pakistan if it did not seem to be taking action against Haqqani network and the Afghan Taliban.

We, said a newspaper editorial, have been here too many times before to think it may now be different. “Each time a US drone hits a target here in this country, we hear the same disco club remix of the old tune about how this is violation of Pakistan’s airspace and sovereignty. The only thing that has changed since the first strike back in 2004 is that the state at least now admits these are American bombs raining down on our parade.” Has the time not come to change the record, it asks. 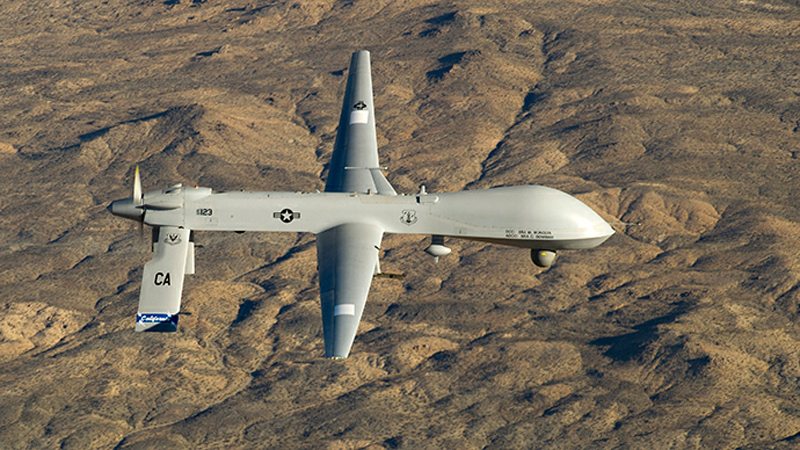 As the war of words intensified further, a spokesman for the UN refugee agency, UNHCR, added to the confusion by declaring that there were “no refugee camps in the tribal areas, and no sign of a camp can be seen in pictures from the site.”

No matter how false it may look, whether one believe it or not, the US — adamant on ‘teaching Pakistan a lesson’ – will still be able to justify the drone attack.

“Out of total 54 Afghan refugee camps and complexes in Pakistan, 43 are in Khyber Pakhtunkhwa that overlap in FATA. Pakistan has hosted millions of Afghan refugees for more than last four decades. The Pakistan government has time and again sought an early repatriation of the Afghan refugees owing to the security concerns and changing moods.

“The time for action has come if, indeed, we are serious about putting an end to the American drone program in our country. Let us be momentarily reckless and assume we are.”

This is time for the people of Pakistan to join hands together, shun differences and make efforts to reach a consensus on one-point agenda — i.e. the security concerns of the country. Both the houses, National Assembly and the Senate of Pakistan, as well as all the five provincial assemblies must pass resolutions against the US attack, and raise their voice at the international levels, urging the Americans to eschew the path of violating Pakistan’s sovereign space and find a way of working together in cohesion and unison, to fight the menace of terrorism by joining hands together and sharing intelligence from both the sides of the Afghan border.

At the same time, Pakistan must have other options to keep in mind. This is an issue where Islamabad cannot afford to allow the Americans to let loose their reign of terror through drone strikes or ground hot pursuit.

There has to be an agreement afresh that first; the border between Pakistan and Afghanistan may be secured, two; both sides would be responsible to secure their respective areas and purge it of terrorists or terrorist safe havens, three; the Afghan side must be asked to bust the sanctuaries offered to Mullah Fazlullah and others or otherwise Pakistan reserves the right to send its own predator Uqabs to destroy those save havens.

Uqab drone; which we basically have built to primarily monitor the CPEC infrastructure projects, has a very sophisticated and advanced technology with a flight capacity of 15 hours; it can also carry a missile of up to 1,000kg in ammunition weight. One believes that if actionable intelligence is shared, this war of words cannot escalate to the level of a dangerous war in the region. For that purpose, we must seek the political and diplomatic help from our friends like China, Turkey and Saudi Arabia and other countries including Russia and European Union.

Fifthly, Pakistan must expedite the process of sending back the refugees. There should be no further extension to the refugees’ stay in Pakistan. Last month, the government had approved only 30-day extension to the stay of around 1.4 million registered Afghan refugees in Pakistan. Islamabad has now set a deadline of January 31 for all the refugees to return to Afghanistan.According to the UNHCR statistics, nearly 1.4 million Afghan refugees remain in Pakistan. However, unofficial data suggests that a further 700,000 undocumented refugees could be in the country.

Before and after the January 1 tweet by Trump, America gradually stopped the Coalition Support Fund, military aid and security assistance. In response, t Pakistan announced to stop intelligence sharing and other cooperation it had been extending to ISAF and NATO troops stationed in Afghanistan. The Americans rebuff Pakistan’s offer of taking action itself on the basis of shared intelligence.

As a newspaper read, “the Trump administration seems to have decided to see its relationship with Pakistan through the lens of its war in Afghanistan and its desire to cultivate closer ties to India. With thousands more US troops expected in Afghanistan, it would come as no surprise if there was a steep increase in the frequency of drone attacks. But, as the experience of the US in the past has shown, the more drone strikes it launches in Pakistan, the more chances of peace are diminished. Unilateral military action has been counterproductive in the past and this time will be no different.”

Pakistan needs to engage the world community and the international community must urge the US to seek a diplomatic solution to the Afghan imbroglio as immediately as possible and prevent this war of words from turning into an ugly war of killing machines on both the sides.

The author is concerned citizen