‘Will present Raza Khan by February 7’ 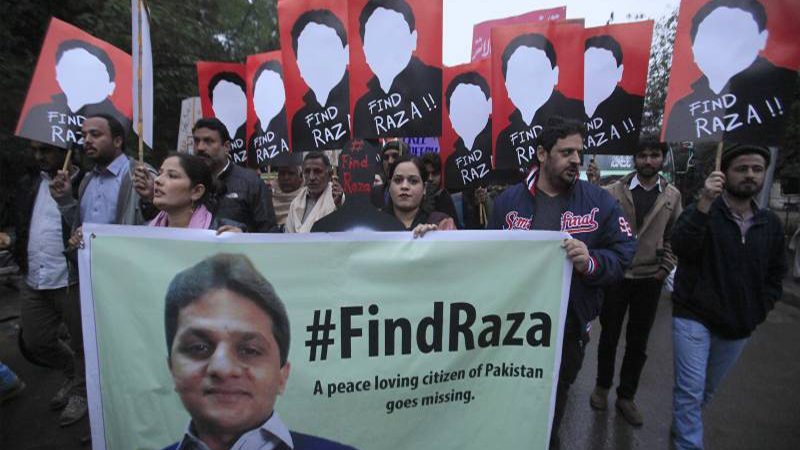 LAHORE: Raza Mehmood Khan’s case on Monday took a positive turn as Deputy Attorney General Javed Kasuri assured that the missing peace activist will be presented before the court on next hearing, reported Daily Times.

During the proceedings, Advocate General told Justice Malik Shahzad that Raza Khan’s whereabouts still remained unknown, upon which the judge asked him to submit the same response in writing so that he would summon Defence Secretary on next hearing.

Deputy Attorney General, who deals with all the missing persons’ cases in Punjab, then appeared before the court and assured that Raza Khan will be presented within two weeks. He told that he had contacted a few agencies but none of them confirmed having abducted Raza.

Also read: ‘My son’s crime is that he feels the pain of others’

He asked for two more weeks for the retrieval of the peace activist. Justice Malik Shahzad said that the authorities had already taken too much time and yet needed more time to locate the missing person whose family had been suffering throughout. Javed Kasuri gave the assurance however and the court was adjourned till February 7.

After the hearing, the deputy attorney general met Diep Saeeda and Sohail Afzal Khan, the lawyer presenting the case today before court as counsel Asma Jahangir was unable to attend the hearing. He asked them about Raza Khan’s activities and assured of his all-out support in the case. He added that he had retrieved all the missing persons whose cases he had taken up till date.

“It was disappointing though that the deputy attorney general asked for the same details that we had already provided to the police before even the first hearing”, Diep Saeeda said. She added that the judge had expressed serious concern over the issue and hoped that Raza will soon be recovered.

Raza Mehmood Khan, an activist advocating peace between India and Pakistan, had gone missing on December 2 while returning from a forum discussion over the issue of Tehreek-e-Labbaik Ya Rasool Allah’s Islamabad sit-in protest.

“We still have no clue about his whereabouts but it doesn’t look like a robbery from the outset. All the valuables at his home are in place and the only thing missing along with him is his computer’s CPU. It looks like a case of illegal detention”, Diep had said.