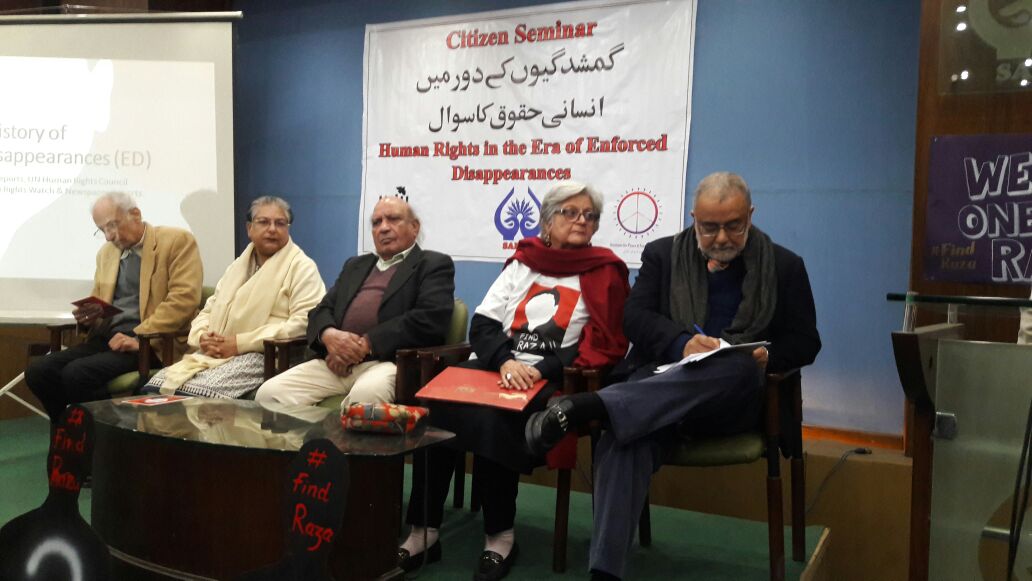 There was a grim silence in the hall as Mehmood Hayat Khan, father of missing peace activist Raza Mehmood Khan, walked to the stage with eyes of a small crowd of scholars, activists and students gathered at South Asia Media Centre fixed at him. As he started to speak in his dejected, yet firm, voice, many among the listeners were reminded of the patience of Iqbal Khan, father of Mashal Khan who was lynched in April last year by his fellow students at Abdul Wali Khan University in Mardanover unfounded blasphemy charges.

“I don’t know whether I’m lucky or unlucky”, he said. “I feel unlucky because my son is missing. And we don’t know anything about his whereabouts. But I’m lucky to have all of you by my side here today and I feel proud to have fathered a son who felt the pain of those who were not even related to him. That is the only reason why he has been abducted. I thank you all for coming here today and becoming a voice for his retrieval”.

It was a short speech that might have moved the gods and forced them to change their grand plans had it been an Indian movie. But it wasn’t. The country where this event was organised has 1498 people officially missing at the moment, as stated by Human Rights Commission of Pakistan (HRCP) Secretary General IA Rehman during his speech here. All these people are feared to have been abducted by the state’s security agencies for one reason or the other. These include dissident Sindhi nationalists, protesting students and civil society members from Balochistan, people linked to outlawed outfits from Khyber Pakhtunkhwa, political workers from Karachi, Punjab and many other parts of Pakistan, which has on Friday been put on the watch list for religious freedom violations by the United States. 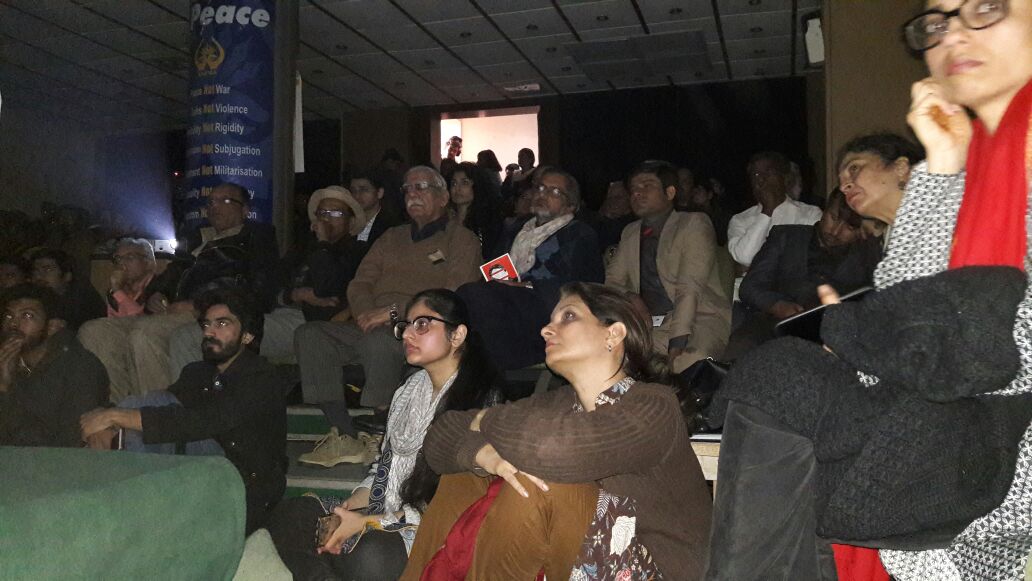 The theme of the event organised by South Asia Free Media Association (SAFMA) on Saturday was the same: Human Rights in the Era of Enforced Disappearances. Some of the speakers were outraged at the situation prevailing in the country. Others were able to maintain their soberness somehow. But none of them seemed happy with what the state was doing.

ImtiazAlam, senior journalist and a strong believer in peace between India and Pakistan, exactly what Raza Khan advocates, was livid as he reminded the state that the people living in this piece of land were not its property but just the other party in a social contract which forms the very basis of its existence. “We have given up some of our rights for the protection of another set of rights under this social contract. We are not looking to overthrow this state. We are not asking for freedom. All we are demanding is legal slavery. This state can’t give us even that?”

Human-rights activist and lawyer HinaJilani’s words echoed with same anger as she warned against the commission of human rights violations. “We are this close from international accountability”, she said as the index finger and thumb of her right hand remained apart by only half an inch. “This cannot work. The way you are running this state cannot continue. Today, you’ve been put on a watch list for religious freedom violations. What next? And stop assuming that we’ll fall quiet. No matter how many mouths you shut; many will still remain open to ask for their civil rights”.

She dismissed the requests by some of the speakers to apprise them of the legal position on the issue. “Law is least relevant here. They are not picking up people lawfully. And if you insist, there is no law in Pakistan that would justify enforced disappearances”, she said.

Irfan Mufti was blunt in putting it. “I see only three reasons behind what is happening in this country. 1: The state is afraid of what people like Raza Khan, Ahmad WaqassGoraya and Salman Haider are doing; it fears the narrative these people are trying to build. 2: There is no respect for law or institutions in this country. 3: The state is doing everything with impunity and it isn’t even bothered by its international isolation that is at an all-time high right now”, he said.

Senior columnist and editor of Pakistan’s most popular Urdu opinion website Humsub.com.pk, Wajahat Masood, kept it precise. But he asked a question that remains the most frustrating of them all: Who are we asking all these questions from? “I’ve read the blog published on BBC Urdu by Salman Haider today. He says he was beaten up with brutality while being schooled on issues like ‘poetry, liberalism and the 18th amendment’. If even these issues are a problem, who are we talking to?” Masood asked.

Advocate Salman Akram Raja, Professor Dr Mehdi Hasan, journalist and author Ahmed Rashid criticised the government for inaction and expressed their disdain for the impunity with which the state institutions and security agencies operated.

Yet the most pertinent of issues was raised by senior academic Dr Muhammad Waseem. “Why are they always in plain clothes? When the state system was first formed around 200 years ago, the idea was to provide the people with equality under the laws that governed the functioning of the administration. These laws brought the legitimacy that empowered an ordinary traffic warden to stop and fine even the richest of the men living in the country. The uniform that the warden wears gives him the authority and legitimacy in the eyes of the commoners that allows him to act on behalf of the state. So these people come in plain clothes to pick up the dissenters because while the uniform gives them the legitimacy, plain clothes provide them with the impunity”, he said.

The senior professor stressed that the students must be taught about the social and collective causes instead of just being equipped with the knowledge to make individual careers. He said that the education in the country has focused the ideological perspective only but the need of the hour is to give the students the understanding of the legal perspective too.

It remains the most frightening of the facts highlighted though that just two days after Islamabad High Court’s verdict that no evidence of blasphemy against Salman Haider, Ahmad WaqassGoraya and Asim Saeed was found, the federal cabinet approved adding ‘pornography’ among other offenses in the Pakistan Electronic Crimes Act (PECA).