The Trump economy takes off 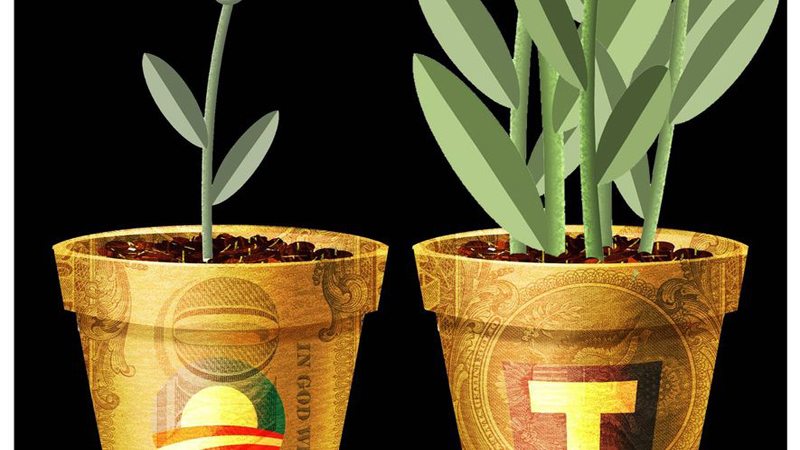 What a year this has been. While it’s been a bumpy ride for the Trump administration, lurching from one controversy to another, it ended with a big tax cut victory in Congress that could help Republicans survive the challenging 2018 midterm elections.

The US economy is finally soaring as a result of the tax rate reductions, breaking out of the anemic 2 percent growth rates of the Obama years that prevented America from achieving its fullest economic potential.

Throughout his two terms, President Obama was best known for cherry-picking economic statistics in an attempt to prove the economy was getting stronger. But year after year the polls consistently showed that a weak economy, fewer jobs, a shrinking labor force and declining incomes remained the nation’s top concerns.

But the ink was barely dry on the GOP’s tax reform bill, and its corporate, business and individual tax cuts, when the economy began growing again at a 3.2 percent rate in the third quarter, and, more than likely, fourth quarter.

The liberal news media still weren’t buying it, believing that the corporate tax cuts will end up enriching business fat cats and CEOs. “Are you living in a fantasy world?” NBC’s Savannah Guthrie asked House Speaker Paul Ryan on “The Today Show.” He wasn’t.

“CEO’s have an incentive to maximize profit and value for shareholders. This means investing in a high-quality workforce, which is why only 3 percent of workers are paid the minimum wage,” writes Andrew Wilford in Investor’s Business Daily.

“Tax reform will increase after-tax incomes for businesses, allowing them to invest more in their workers. This is why the White House estimates that corporate tax rates will result in an increase to average after-tax worker incomes of $4,000,” he explains.

Under the tax overhaul, businesses “would be able to immediately deduct the entire value of capital investments. Since businesses value money upfront that they can reinvest, they have a strong incentive to invest in new equipment now while this full expensive policy is in place,” says Mr. Wilford, a policy analyst at the National Taxpayers Union.

This is why a string of big corporations are announcing bonuses for their workers. AT&T is giving $1,000 to some 200,000 of its workers, and pledging an added $1 billion in capital investment. Similar announcements soon followed from Boeing, Bancorp and Wells Fargo.

Pro-growth advocates like the Club for Growth believe that the GOP’s tax cuts will unleash a tidal wave of “great economic growth and prosperity.”

“In fact, with respect to the individual and major pass through businesses, this bill falls far short of pro-growth expectations,” he says. Among his proposals:

n Enacting “a real 25 percent maximum rate for businesses organized as subchapter S corps or LLCs, rather than artificial exclusions for sectors like financial services, and unfairly excluding 80 percent of business income from the pass-through rate.”

* Abolishing the death tax on estates.

* Lowering the capital gains tax rates to boost investing in the economy.

All of these additional tax changes, or even some of them, will significantly accelerate economic growth in the years to come, and bring in much higher tax revenues to dramatically shrink the government’s monstrous debt.

If the Republicans can pass additional pro-growth tax reforms next year and beyond, the political payoff in 2018 could be historic. A booming economy, growing job market and rising incomes, including a declining budget deficit, would result in a Republican landslide election next November. And that could lift Mr. Trump’s dismal approval polls to record highs.