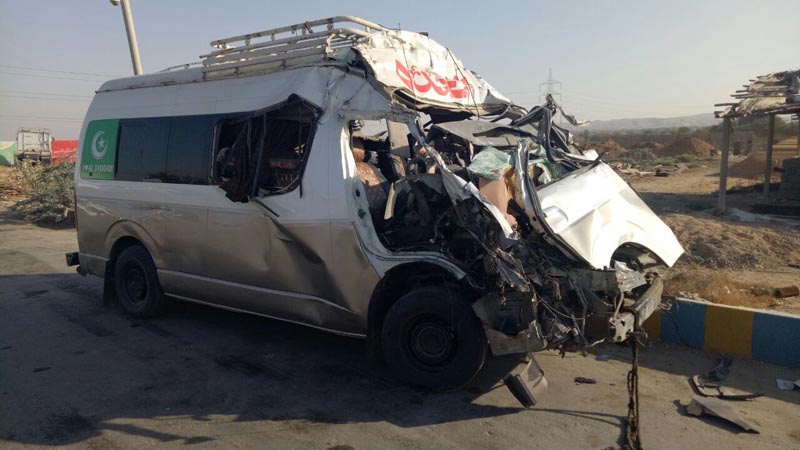 DADU: Nine persons were killed and four injured in a road accident when a van collided with a truck at M-9 motorway near Nooriabad police station on Monday. Naushahro Feroze Hospital Medical Superintendent Ghulam Mustafa Tunio, his seven family members and driver died in the accident.

According to Nooriabad police station SHO Syed Nissar Ahmed Shah, the van was carrying residents of Haji Wali Dino Tunio village, who were returning from Saudi Arabia after performing Umrah. He said that the van and truck involved in the collision were impounded for further investigation and the truck driver was arrested, along with a passenger.

He said bodies of the deceased were sent to their native village and the injured referred to Liaquat University of Medical and Health Sciences Jamshoro and Hyderabad Civil Hospital.

In other news, owing to the Faizabad sit-in, various markets of Dadu and Jamshoro districts remained closed. A shutter down strike was observed in Johi, Mehar, KN Shah and various towns of Jamshoro district including Sehwan, Bhan Sayedabad, Sann, Lakha, and Manjhand town, on the call of Tehreek-e-Labaik Ya Rasool Ullah (TLY).

A rally, led by religious scholar Mufti Khalil Ahmed Jan, was attended by scores of religious activists. Traffic in most parts of the city and its surroundings remained low. All government and private schools were also closed.

However, the news of an agreement between TLY and the government started bringing the city to normalcy later in the day.