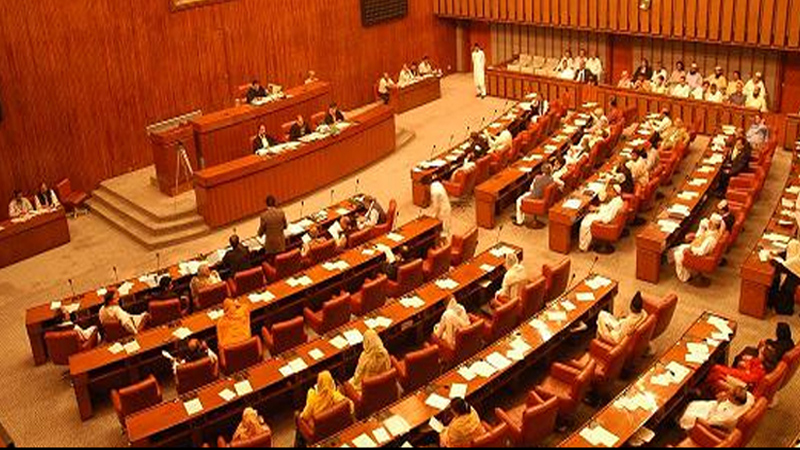 ISLAMABAD: Legislators in the Upper House of parliament on Friday passed the Elections (Amendment) Bill 2017 with a majority after the National Assembly unanimously approved revival of 7B and 7C clauses of the bill, relating to Khatm-e-Nabuwwat.

The bill was tabled by Law Minister Zahid Hamid during the session headed by Chairman Raza Rabbani. The bill will take the form of law after being signed by President Mamnoon Hussain.

Section 7B states that the status of Ahmadis remains as stated in the constitution, whereas Section 7C says that if enrolled voters’ belief in the finality of prophethood of Prophet Muhammad (peace be upon him) is contended, they shall have to sign a declaration reaffirming their belief, failing which their “name shall be deleted from the joint electoral rolls and added to a supplementary list of voters in the same electoral area as non-Muslim.”

The minister said, “We are Muslims and believe in the finality of the Prophet (PBUH).” Zahid Hamid said the status of Qadiyanis would continue as non-Muslims. He said if a person gets himself or herself enrolled as Muslim in the voters’ list, any other person could challenge this before the revising authority where he or she would be required to sign the declaration of the finality of prophethood.

He said if the person refuses to sign that declaration then he shall be deemed as non-Muslim, and his vote will be expunged from the list of Muslim voters and be included in the non-Muslims’ list.

Speaking on the occasion, Senate Deputy Chairman Abdul Ghafoor Haidri said that this bill had ensured that the matter of the finality of prophethood of Prophet Muhammad (PBUH) remains as it is in the 1973 Constitution. Congratulating the nation on the restoration of the Khatm-e-Nabuwwat clause, Haidri said, “Our belief has been secured once again.”

Meanwhile, Senator Aitzaz Ahsan maintained that the government’s role in the situation prevailing in the capital was nowhere to be seen. “The PM and ministers are present in Jati Umra. More protests will be held in Islamabad and the city will become a hostage,” he said.