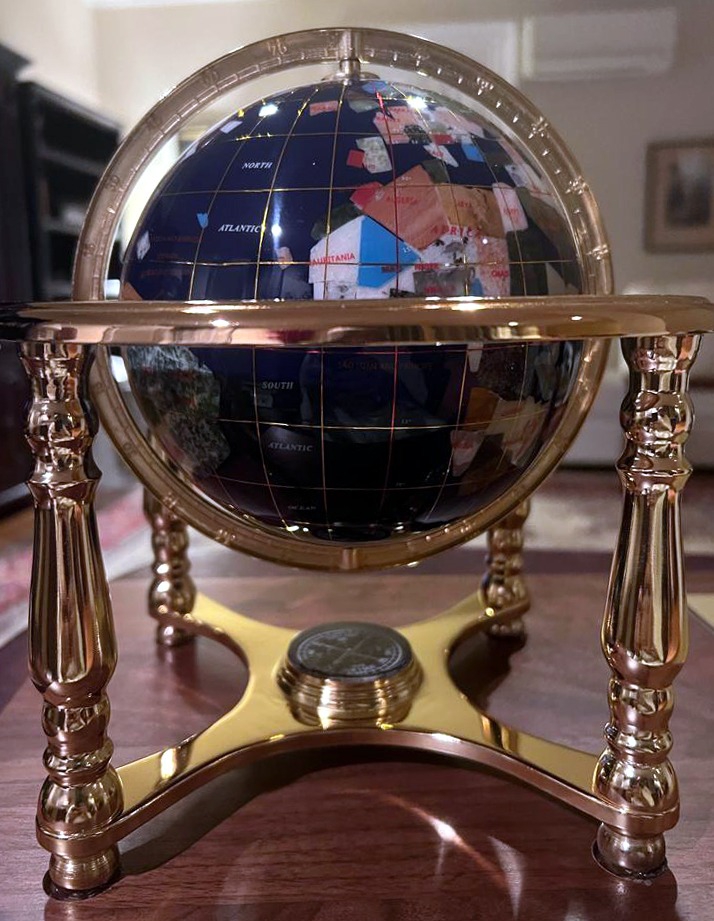 Ambassador Masood Khan, Pakistan’s top envoy to the United States, was honored today with ‘Dr. Martin Luther King, Jr. Legacy Award for Diplomacy and International Service’ in recognition of his commitment, leadership, service and ‘for working to keep the dream alive’.

The award was conferred upon the Ambassador at the 31st International Salute to the Life and Legacy of Dr. Martin Luther King, Jr. convened by Institute for the Advancement of Multicultural and Minority Medicine (IAMMM). The ceremony was attended by US Senators, lawmakers, diplomats, entrepreneurs, community leaders and educationists from Washington and across the United States.

The coveted award was given to Masood Khan for diplomacy and international service in an impressive ceremony which was attended by more than 150 guests. The ceremony was held at Willard InterContinental Washington D.C.
Ambassador Masood Khan was also nominated as the Honorary Chairman of Martin Luther King International Salute.

Thanking IAMMM for the conferment of the Award, Ambassador Khan said that it was an honor for him to be associated with the iconic figure of Dr. Martin Luther King Jr. and his mission. “When you honor me, in fact, you are honoring Pakistan and its people,” he said.

He also thanked Ms. Madeline Y. Lawson, President and CEO of MLK, Jr. International Salute, for her initiative to revive the great event, after the pandemic, to celebrate the life and work of Dr. King. “By associating the diplomatic corps with the Salute, you reach out to all nations and peoples of the world,” Masood Khan said.

Earlier in his opening address as Chairman, Ambassador Khan paid a glowing tribute to the great US leader. He said that Dr. King was a courageous leader who fought repression and depravity to uphold respect for diversity and human dignity.

“His legacy can be summed up in three words: freedom, equality, and justice, for all. It provides a template for combating, anywhere in the world, inequality and discrimination on the basis of race, color, creed, gender, ethnicity and nationality.

“On this day, let’s not forget the people being consumed by the fury of unjust wars and illegal occupation,” he said.
Ambassador Khan said that the vision of Dr. King continued to inspire world leaders, lawmakers and human rights activists and defenders.

Referring to 1969 Convention on the Elimination of All Forms of Racial Discrimination ((ICERD), he said that Dr. King’s strong advocacy for racial equality influenced legislation at the United Nations expanding the body of international law that promotes and protects universal rights of all. “His struggle spurred anti-apartheid movement in South Africa and helped hasten the demise of colonialism,” he continued.

“Like other nations, Pakistan has also been inspired by Dr. King. Personally, for me and other diplomats he has been a lodestar for fulfilling our shared obligations to promote civil liberties and fundamental freedoms,” he said.

Referring to the saying of Prophet Muhammad (P.B.U.H), made fifteen centuries ago, that a white has no superiority over black nor a black has any superiority over white – except by piety and good deeds, Ambassador Masood Khan said that the saying was so compellingly echoed in Dr. King’s declaration in 1963 that all people should be judged not “by the color of their skin, but by the content of their character.”

Masood Khan said that in line with the vision of the great US leader, we should work together for eradication of poverty and climate justice worldwide. “. On this day, let’s not forget the poor populations that seek attention and help,” he emphasized.

Speaking on the occasion U.S. Senator Chris Van Hollen said that “we all have a responsibility to do our very best to stand up for human rights and justice. Not only when it’s politically convenient, but across the globe, applying those standards, not just to our foes but also to our friends,” he said.

Talking about environmental justice, he said that “those around the world who are most vulnerable are those who are the most harmed by climate change.

Referring to the recent floods in Pakistan, Senator Chris Hollen said it was important that the United States and other countries that had been primarily responsible for the release of carbon emissions and climate change do their best to address the inequities and harm imposed on countries who contribute very low.

Ambassador Masood Khan thanked Senator Chris Hollen and said that Pakistan was striving to get recognition for climate justice, not just for Pakistan but for all vulnerable countries around the globe.