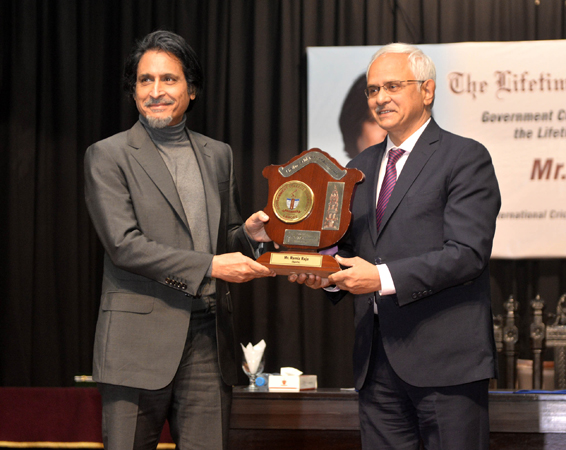 LAHORE: The Government College University Lahore conferred its Lifetime Achievement Award upon former Pakistan captain and chairman of the Pakistan Cricket Board Ramiz Raja at a ceremony at the University’s Bukhari Auditorium here on Tuesday. The award recognizes those alumni who have made outstanding contributions in their respective fields, and is one of the highest honours GCU bestows. The award was originally announced for Ramiz and nine other alumni at the university’s 20th convocation in November 2022, but he was unable to attend the convocation due to a trip abroad. During the ceremony yesterday, Vice-Chancellor GCU Prof. Dr Asghar Zaidi presented the prestigious award to Ramiz, who spoke about his experiences in cricket and shared personal anecdotes of his college days. He expressed gratitude towards GCU for recognising him with this prestigious award and called it a great honour. Vice Chancellor Prof Asghar Zaidi commended Ramiz Raja for his outstanding contributions to the field of cricket. He believed that recognising and honouring the achievements of alumni can help inspire current students and encourage them to strive for excellence in their own pursuits.

Addressing the event, Ramiz said a ruling Bharatiya Janata Party (BJP) influenced mindset had taken over the Indian cricket board and was trying to restrict Pakistan internationally. Ramiz said that the International Cricket Council (ICC) was influenced by the Board of Control for Cricket in India (BCCI) because the majority of its revenue came from India. The former PCB chief said he took the stance for the country when India tried pressurising Pakistan to shift this year’s Asia Cup to a neutral venue despite the Asian Cricket Council’s (ACC) decision to give hosting rights to Pakistan.

Ramiz, in October last year, had said that Pakistan will not go to India for ICC World Cup if the neighbouring country pulls out of the Asia Cup in Pakistan. The former cricketer added that the Indian team, with a billion-dollar cricket industry, was unable to make it to the finals of the T20 World Cup but Pakistan did. He said he had focused on growth and consistency during his 1.5-year tenure, adding that overthrowing an existing setup by bulldozing the constitution was highly unfair.

He added that such radical changes in the board and system would demoralise young players adding that the restoration of PCB’s 2014 constitution had brought Pakistan cricket to a “dark age”. The former Pakistan skipper alleged that the new setup promised to provide employment, however, they had fired over 150 coaches. Rejecting the notion that cricketers were not good administrators, Ramiz said that cricket affairs should be run by cricketers and be kept out of politics. Talking about Shan Masood’s appointment as vice-captain of the one-day team for the New Zealand series, Ramiz said that a player whose place in the playing eleven was not secure was named skipper Babar Azam’s deputy, adding that such tempering would only cause pressure on the team.

Talking about wicket-keeper/batter Sarfaraz Ahmed’s benching during his era, he said that Sarfaraz was always part of the Test setup, but the playing eleven was always picked by the coach and captain. While talking about match fixing in cricket, Ramiz labelled players involved in fixing “traitors”, and said that he does not have any respect for them. “I am from an era when nine players were fighting for the win while two were just playing around. Players involved in fixing games deserve no love,” he concluded.