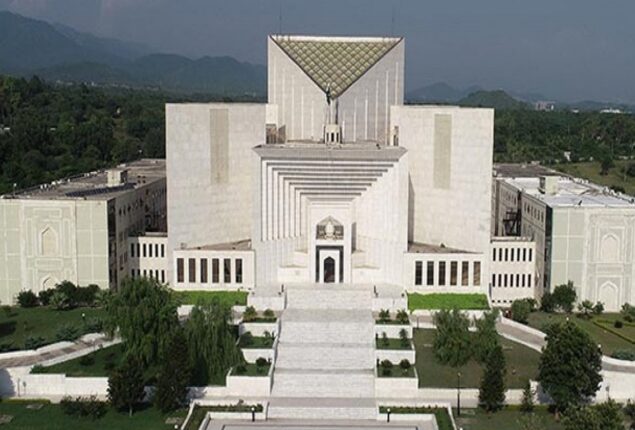 LAHORE: The Supreme Court (SC) on Thursday dismissed an appeal of Pakistan Tehreek-e-Insaf (PTI) chairman Imran Khan against striking out his right of defence in a defamation suit filed by Prime Minister Shehbaz Sharif against him.

The three-member bench heard the appeal at Supreme Court Lahore Registry and dismissed it with a 2-1 majority while upholding the trial court orders.

Justice Syed Mansoor Ali Shah, who was heading the bench, and Justice Amin-ud-Din Khan dismissed the appeal whereas Justice Ayesha A Malik dissented with their verdict.

During the proceedings, Mustafa Ramday appeared on behalf of Prime Minister Shehbaz Sharif and argued that the trial court lawfully struck the right of the petitioner (Imran Khan) to answer the interrogatories of the respondent (Shehbaz Sharif).

He submitted that the petitioner could have refused to give an answer to any question in his reply, adding that the final opportunity to file a reply was also deliberately missed. However, Imran Khan’s counsel Barrister Ali Zafar submitted that the trial court unlawfully struck the right of his client.

He pleaded with the court to set aside the verdict of the trial court. Subsequently, the bench, after hearing detailed arguments of the parties, dismissed the appeal with a 2-1 majority and upheld the trial court verdict. It is pertinent to mention here that an additional sessions judge had struck out Imran Khan’s right of defence in the defamation suit in Nov, 2022.

The Lahore High Court had also dismissed an appeal of the PTI chairman against the trial court verdict on Dec 7. Prime Minister Shehbaz Sharif, through the defamation suit, had submitted that PTI chief Imran Khan alleged in a TV programme on April 26, 2017, that Rs 10 billion bribe offer was made to him by Shehbaz Sharif for silence over the Panama papers case.

He said that allegations levelled against him were not only false but also defamatory. He said that Imran Khan also failed to tender a publicly broadcast apology despite the fact that he was served a legal notice in May, 2017 for the purpose.

The court has been requested to issue a decree for recovery of Rs 10 billion as compensation for the publication of defamatory content.