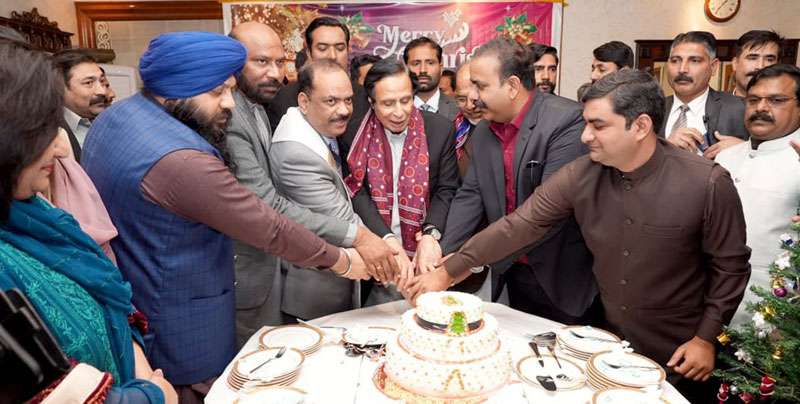 CM handed over a cheque worth rupees 1.5 million to Sajid Ali Sadpara for “K2 Clean Up” campaign.

Expressing his views on the occasion, the CM remarked that the efforts of Sajid Ali Sadpara for “K2 Clean Up” campaign were praiseworthy, saying that it was necessary to clean up mountains along with cities, villages, streets and towns. He maintained that the Punjab government fully supports “K2 Clean Up” campaign and the campaign would also prove to be beneficial in promoting tourism.

CM complimented Sajid Ali Sadpara for being a brave son of Pakistan who achieved a remarkable milestone by conquering K2 mountain without oxygen. He vowed to continue to encourage the youth like Sajid Ali Sadpara in future as well.

Sajid Ali Sadpara thanked the chief minister on extending commendable cooperation for “K2 Clean Up” campaign and remarked that CM won their hearts by generously providing funds for the campaign.

Former Principal Secretary to CM GM Sikander and DG Sports Board Punjab were also present on the occasion.

CM highlighted that Quaid-e-Azam Muhammad Ali Jinnah denoted a white colour in the national flag for the minorities, adding that to safeguard the rights of minorities was part of our duty. He revealed to fix the quota of minorities in employment by enhancing it from 2 per cent to 5 per cent. He added that special funds were being provided on the religious festivals of minorities as well. CM said that funds for the construction and repair work of churches had been increased.

The chief minister maintained that the funds being provided for the welfare of minorities community were solely spent on their well-being. He outlined that the problems pertaining to constituencies of the elected representatives belonging to minorities community would be resolved on priority basis. He vowed to further strengthen the constituencies of Assembly members belonging to minorities.

CM remarked that the doors of his office remain open all the time for the minorities community and would further strive with noble intentions to resolve all their problems as soon as possible.

He wished the merry Christmas to the Christian community staff members of the hospital and cut Christmas cake. He also visited the hospital especially the newly inaugurated Mother and child care center. He reviewed the basic facilities provided to the families. MS Sir Ganga Ram Hospital Professor Dr Athar gave briefing to the guest and informed the best medical facilities were being provided to the patients. Robinson Aziz discussed with different doctors, patients ,lower staff members and the attendants.He emphasized on the provision of free medicine to the patients and directed the Medical Superintendent for special arrangements for the attendants who stay in the hospital in such a cold weather.