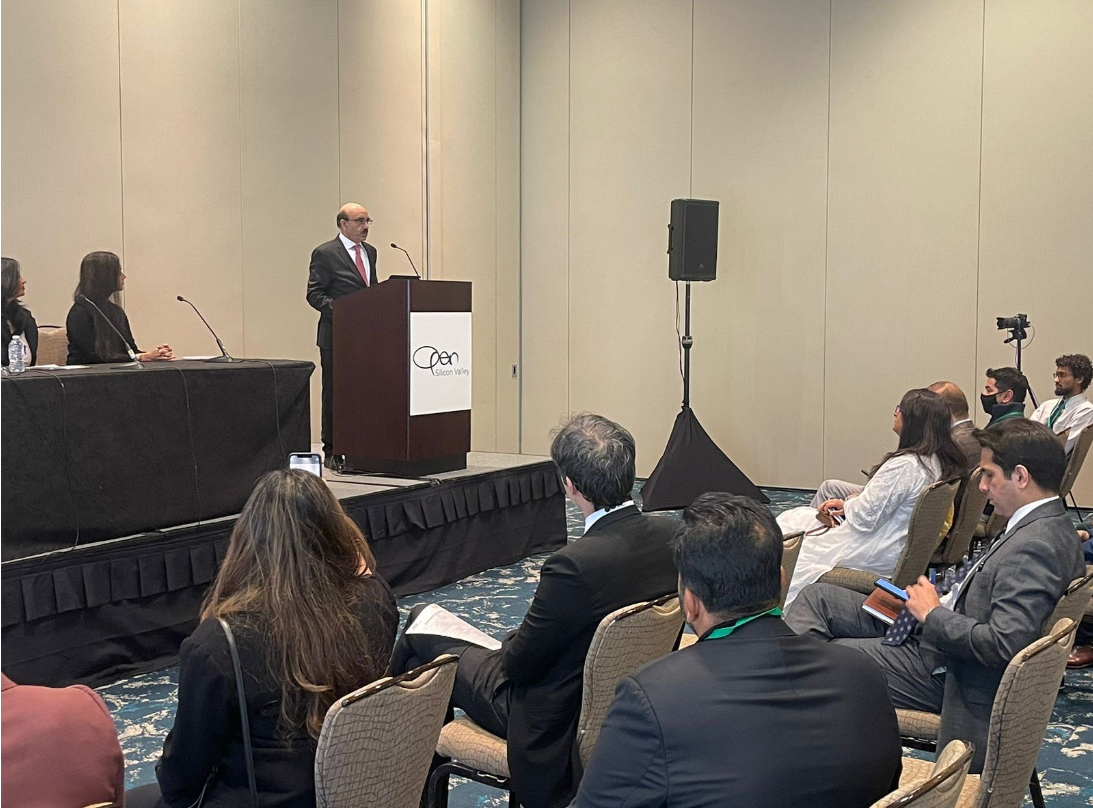 “Pakistani American Tech entrepreneurs can act as a catalyst to accelerate growth and investment in Pakistan’s IT and start up sectors” Ambassador Masood Khan highlighted this at the Organization of Pakistani Entrepreneurs (OPEN) Annual Forum at Silicon Valley on November 12, 2022.
Speaking at the session on promoting investments in Pakistan’s tech sector, Ambassador Masood Khan said that recent uptick in the bilateral relations between Pakistan and the U.S. had provided a window of opportunity for the Pakistani-Americans to invest in Pakistan. He noted that both countries had prioritized economic partnership to be the new anchor of bilateral relations and were working together to create opportunities for cooperation in trade, technology, health, energy, agriculture and education.

Briefing the participants on investment opportunities in Pakistan, the Ambassador said that Pakistan’s pivotal geographical location, its extended neighbourhood and its impressive demographic cohorts make it an ideal destination for investment. He noted that around 80 U.S. companies and corporations had been doing business in Pakistan for decades. He said that the Government of Pakistan had taken a number of steps to improve the investment climate in the country, including liberal visa regime, streamlining of taxes and easy repatriation of profits. As a result, he added, U.S. technology investors and venture capitalists were investing in Pakistan’s startup eco-system in e-commerce, fintech, health, retail and supply chains.
He invited the Pakistani-American investors and tech entrepreneurs to take advantage of these positive developments and invest in Pakistan’s IT and technology sectors.
Other speakers on the panel included Mr. Duraid Qureshi, CEO of Hum Network Ltd, Ms. Kanwal Bukhari, Program Manager USAID Pakistan and Mr. Naveed Sherwani, a leading Pakistani-American entrepreneur. They announced the launching of a fund called “Pakistan Katalytic Fund” of US$ 50 million for investing in Pakistani startups.
Earlier, Ambassador Masood Khan gave keynote remarks in a session on Disaster Management through technology. He said that Pakistan had been devastated by a climate-induced catastrophe. More than one third of the country was under water and around 33 million people had been affected. The damages were estimated to be US$ 40 billion. He thanked the U.S. government for its timely and generous support of US$ 97 million as well as the Pakistani Americans for their contributing US$ 27 million to the flood relief efforts. However, he added, more assistance was needed for the critical phases of reconstruction and rehabilitation.
The Ambassador noted that despite being the lowest emitter of Green House Gases (GHGs), Pakistan was the 8th most vulnerable country to the impacts of climate change. He said that Pakistan was seeking climate justice for countries most vulnerable to climate change and had advocated the inclusion of loss & damage agenda at COP 27 in Egypt this year.
Speaking on the role of technology to help in disaster management, the Ambassador said that technology could be used for predicting natural disasters, mobilizing support for rehabilitation and creating awareness about preparedness, mitigation and adaptation.
Yesterday, the Ambassador addressed a gathering of leading Pakistani American investors, entrepreneurs and OPEN Charter Members hosted by Mr. Junaid Qureshi, President OPEN at Silicon Valley. The Ambassador told the audience to have faith in Pakistan as it is bound to become one of the top economies of the world. He said that Pakistan-U.S. relations had been recently reenergized and rejuvenated, and invited the Pakistani Americans to be part of this positive change in relations. He also underscored the crucial role of diaspora in strengthening Pakistan US relations and stimulating economic growth in Pakistan.
OPEN Silicon Valley Annual Forum is an annual event organized by the Silicon Valley chapter of OPEN. This year’s event was focused on Fintech, web 3, Startup eco-systems in Pakistan and climate change. It was attended by nearly 2000 participants, including entrepreneurs, businessmen, professionals, academics and students.