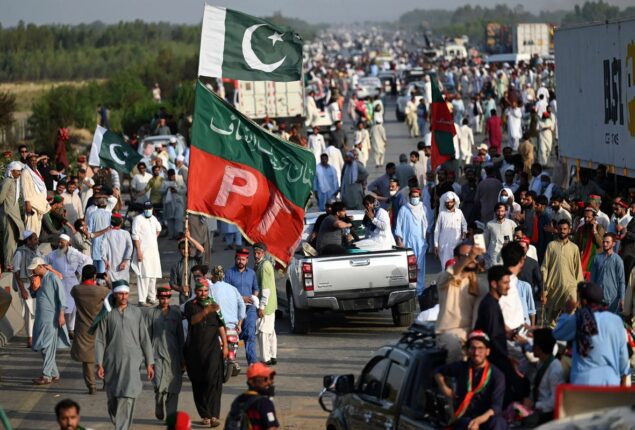 The Pakistan Tehreek-i-Insaf PTI protesters on Wednesday in Islamabad continued their protest for the third day in a row by obstructing the M-1 and M-2 highways, making travel difficult for commuters.

Vehicles were observed backed up in a huge line on the highway. Both employees and students are unable to get to their workplaces and educational institutions.

Wasiq Qayyum, the deputy speaker of the Punjab Assembly, urged the PTI workers to keep up their third-day protest over the attempted murder of their leader Imran Khan.

The PTI workers have paralyzed traffic in Islamabad and Rawalpindi.

The Shamsabad, Murree Road in Rawalpindi is closed from both sides due to protest.

The protests are causing huge snarl-ups on the roads of twin cities.

While addressing a press conference in Islamabad on Tuesday, Interior Minister Rana Sanaullah lashed out at PTI supporters who have closed M1 and M2 to protest against Thursday’s gun attack on their leader Imran Khan.

He reminded the provincial governments that it was their responsibility to keep the motorway open.

He requested the high courts in Peshawar and Lahore to take notice of the matter.

He said that creating difficulties for their own people, was a foreign agenda. He castigated the KP and Punjab governments asking them ‘don’t protect a few people on the roads, rather make them sprint away’.

Sanaullah held that the PTI supporters were creating difficulties for people. “People have rejected their Fitna march,” he maintained.

In another development yesterday, the interior minister also wrote two identical letters to the KP and Punjab governments requesting them to “immediately remove the protestors to restore smooth movement on motorways, highways and link roads”.

He also said that this was not a long march rather the two provinces wanted to invade the federation.