‘Willing to engage with India’

* PM says he wants to leave behind a legacy of peace and progress
* India has become a threat to minorities, neighbours and entire region
* CPEC has transformed economic and connectivity landscape of region 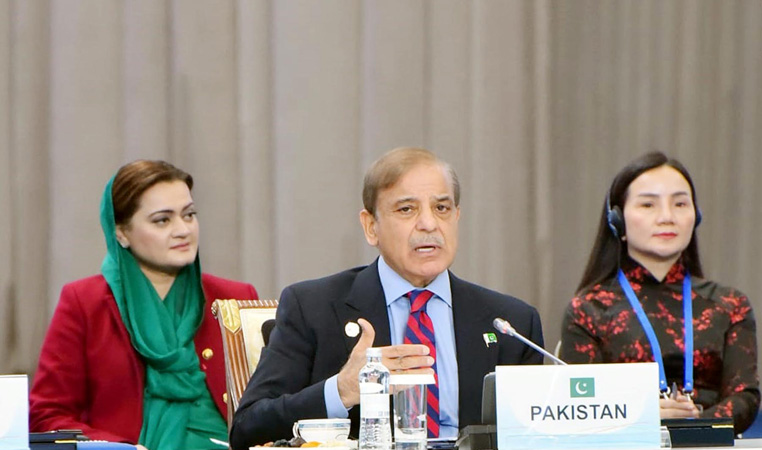 Prime Minister Shehbaz Sharif on Thursday said that he was “absolutely ready” to have dialogue with India for resolution of the Kashmir dispute as he wanted to leave behind a legacy of peace and progress for the prosperity of coming generations.

Addressing the 6th Summit of the Conference on Interaction and Confidence Building Measures in Asia (CICA) in Kazakhstan’s capital Astana, the prime minister said Pakistan was “absolutely ready and willing for a discussion with Indian counterparts to promote trade and investment provided they showed the sincerity of purpose”. “India has become a threat to its minorities, neighbours and the entire region,” he remarked.

“I want to leave behind a legacy of peace and progress for the prosperity of the coming generations of our region,” said the prime minister who spoke at length about the the regional issues, including Kashmir and Palestine, and revival of peace in Afghanistan calling for their dialogue-based resolution.

Highlighting the human rights abuses in the Indian Illegally Occupied Jammu and Kashmir, the prime minister said that the Kashmiris faced continued denial of their right to self-determination.

He urged other countries to take notice of the human rights violations in the IIOJK, which was the manifestation of Indian policy of preferring bullet over ballot as the country had also blatantly quashed the United Nations Security Council’s resolution on holding a plebiscite in Kashmir.

He told the gathering that Pakistan was willing to “conditionally engage with India” for the sake of prosperity and development as both sides of the border could not afford to deal with massive challenges of poverty and unemployment amid meager resources.

He stressed that the people deserved the resources to be diverted to their education and health. He, however, said the “onus remains on India to take a necessary steps to engage towards the result-oriented solutions.”

“Through constructive dialogue, we can build mutual trust,” he remarked and mentioned Pakistan’s location offering a natural bridge among various economies of the region.

Coming to Afghanistan, the prime minister said, “A prosperous and stable Afghanistan is not only in the interest of Pakistan but also for the international community.” He said the four decades of conflict not only took a heavy toll on the country but also upon its neighbouring Pakistan. The prime minister said Pakistan suffered immense damage to its peace and security with serious consequences in form of 80,000 casualties and billions of dollars financial losses. He, however, expressed satisfaction that after immense sacrifices, Pakistan was now able to control extremism and terrorism on its soil, besides managing to host four million Afghan refugees.

Referring to another regional dispute of Palestine, the prime minister reiterated his call for a peaceful way of its resolution to ensure peace in the Middle East and the region. He called for pooling resources among the regional countries to address the common challenges in the interest of peace and progress. “Pakistan’s first priority at the moment is to revive rapid and equitable economy,” the prime minister said and highlighted the multi-billion dollar project of China Pakistan Economic Corridor (CPEC), which had transformed the economic and connectivity landscape of the region. He also invited the CICA member states to consider benefiting from the trade, investment and business opportunities offered by Pakistan.

On the recent floods in Pakistan, the prime minister pointed out that the country was bearing the brunt of climate change despite its less than one percent carbon omissions. He thanked the countries that stepped forward in extending assistance to Pakistan to carry out the relief and rehabilitation activities in the flood-affected areas.

He also termed encouraging the upscale $816 million flash appeal by the United Nations launched to meet the daunting challenge of heavy losses incurred by the flash floods. The prime minister expressed confidence that Pakistan was “determined and committed” to emerge stronger after the flood disaster. “Pakistan, with the support of its people and the friendly countries, will come out of this problem,” he said. He also elaborated the significance of CICA as a unique forum for promoting interaction, understanding, and collaboration among the countries across Asia.

Earlier, the prime minister on his arrival at the Palace of Independence, the venue of CICA summit, was warmly welcomed by Kazakh President Kassym-Jomart Tokayev. The prime minister along with other heads of state and government also had a group photograph before the summit was opened.

Meanwhile, Prime Minister Shehbaz Sharif on Thursday highlighting the importance of promoting connectivity in the region reiterated Pakistan’s readiness to provide access to Tajikistan to Gwadar and Karachi ports. In a meeting with President Emomali Rahmon in Kazakhstan’s capital Astana, the prime minister emphasized the expansion of cooperation in the field of road transport and air links.

The two leaders, who met on the sidelines of the 6th Summit of the Conference on Interaction and Confidence Building Measures in Asia (CICA), agreed on cementing high-level contacts, inter-parliamentary ties and technical level meetings to further promote substantive cooperation.

The prime minister underscored the need to boost cooperation in the energy sector.

It was agreed to work together for early completion of CASA 1000 project, which would be a harbinger of future energy corridors with Central Asia.

PM Sharif updated the Tajik President on the rehabilitation work being undertaken by his government in the aftermath of the catastrophic floods in the country. He stressed the need to make joint efforts to cope with the rising threat of climate change induced natural disasters.

President Emomali Rahmon assured PM Sharif of Tajikistan’s continued support in this regard, including despatch of an additional convoy of trucks carrying essential flood relief items.

The prime minister recalled his meeting with the Tajik President on the sidelines of SCO Summit last month in Uzbekistan’s historic city Samarkand and expressed satisfaction over the steadily increasing bilateral engagement in diverse areas.

The two leaders also discussed regional and global issues of mutual interest and agreed on the need to work together to strengthen peace, stability and security in the region. Both sides also agreed to strengthen their engagement for fostering greater economic cooperation, particularly in the areas of trade, energy and connectivity.

Pakistan and Kazakhstan on Thursday agreed to diversify bilateral trade and explore the possibilities of expanding investment cooperation.

The bilateral relations were discussed in a meeting between Prime Minister Muhammad Shehbaz Sharif and President of Kazakhstan Kassym Jomart Tokayev here on the sidelines of the Conference on Interaction and Confidence Building Measures in Asia (CICA) Summit. The two leaders reviewed the bilateral relations, including trade, connectivity and energy.They agreed on enhancing technical level engagement to accelerate progress on agreed items.

The prime minister recalled his meeting with the Kazakh president on the sidelines of SCO Summit at Samarkand in September 2022, which set the pace for reinvigorating multifaceted engagement.

He underlined the need for promoting joint ventures in energy, agriculture, technology, logistics, communication and construction.

Prime Minister Shehbaz also emphasized the importance of direct air connectivity for boosting business linkages, people-to-people contacts, and tourism. He underlined that Pakistan’s Special Economic Zones (SEZs) were open for investors from Kazakhstan. He also invited Kazakhstan to benefit from Gwadar and Karachi ports for expanding their trade.