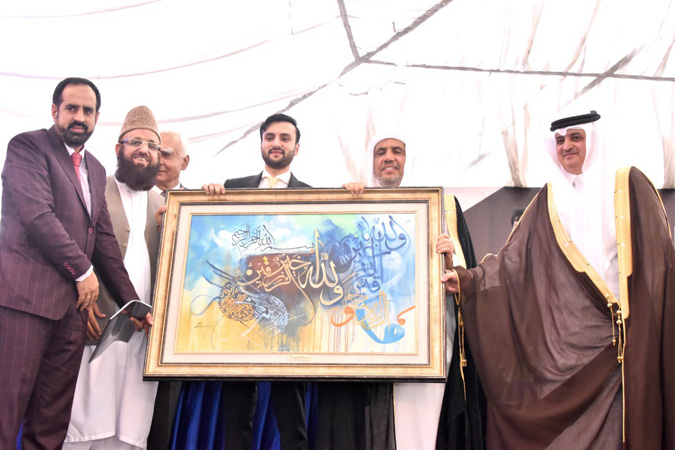 Secretary General Muslim World League Dr. Muhammad Bin Abdul Karim Al-Issa has said that the Islam is the religion of compassion and kindness, adding, the Muslim World League is raising awareness in the west on ‘Islamophobia’ by presenting the true image of Islam.

Addressing an event at the University of Management and Technology (UMT) here on Thursday, he urged the youth to adopt such a noble character on the principles rooted in Quran and Sunnah that could inspire the western youth.

He said Islam is the benefactor to humanity irrespective of caste, colour, geography and ethnicity so the west must not look at Islam and Muslims as fundamentalists, extremists and narrow-minded people. “We believe in interfaith harmony and respect all other religions and faiths. I urge the world leaders to foster inter-faith dialogue between Islam and Abrahamic religions and sit together to find out the solution to Islamophobia”, Dr. Muhammad Bin Abdul Karim said.

Ambassador of Saudi Arabia Nawaf Bin Saeed Al Malki in his address, commended the role of the UMT in producing remarkable leaders in diverse disciplines. He also reiterated his resolve to maintain strong bilateral relations between the Kingdom of Saudi Arabia and Pakistan based on sentiments of brotherhood, love and sincerity. He also prayed for the prosperity and stability of Pakistan.

Senator Hafiz Abdul Karim speaking on the occasion said that Pakistan and Saudi Arabia share much in common. He applauded the vital role played by Pakistanis as entrepreneurs, engineers, workers and laborers in Saudi Arabia.

In his remarks, UMT President Ibrahim Murad appreciated the endeavours of the Muslim World League for encountering extremist narratives found in the west against Islam and the Muslim world.

He urged Muslim scholars to come out with a scholarly response to Islamophobia through proper research and change in behaviors. The UMT in collaboration with the Muslim World League would design effective and comprehensive programs aimed at raising awareness on the subject of Islamophobia, he added.

Meanwhile, souvenirs were also presented to the distinguished guests.