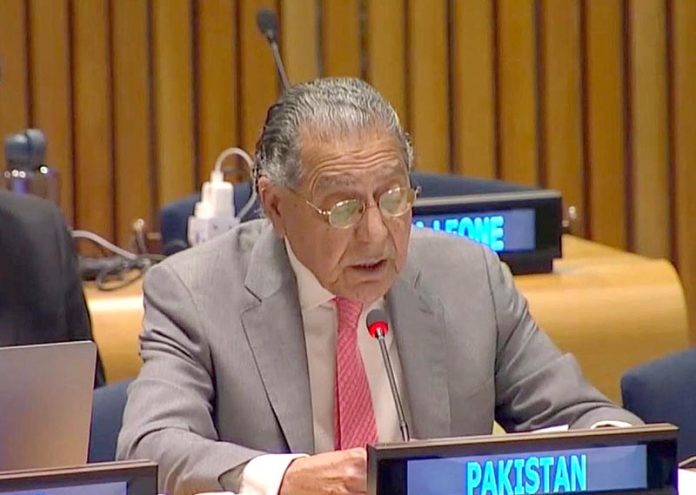 UNITED NATIONS: Pakistan, speaking for the Group of 77 (developing countries) and China, has called for a clear roadmap to overcome the recent series of “shocks” to the world economy, including the deadly coronavirus pandemic and the spike in commodities prices, that have disproportionately impacted the poorest countries.

“The unequal impacts have been accompanied by a deficit in solidarity – as visible on vaccine availability and the liquidity support — $17 trillion generated in the richer, less than $100 billion for the developing world,” Ambassador Aamir Khan, deputy permanent representative of Pakistan to the UN, told the General Assembly Second Committee, which deals with economic and financial matters.

Speaking in a debate on Macro-economic Policy and Financing for Development, Ambassador Aamir Khan said other factors disrupting the economy such were excess liquidity injected in the hard currency economies, the growing impacts of climate change and the geopolitical tensions and accompanying disruptions due to trade and financial restrictions.

As a consequence, he said, poverty has enlarged — over 100 million pushed back into extreme poverty, with the developing countries now facing the triple challenge of meeting their needs for food, fuel and finance.

As a result, over 50 developing countries are in debt distress and many may be obliged to default, as climate change continues to take its heavy toll.

The G77 commends the efforts being made by the UN Secretary-General and others to ameliorate plight of the poorest and most vulnerable, but Ambassador Aamir Khan said, “as yet, there is no clear road map to overcome the development emergency …”.

In this regard, he said that G77 has identified the following specific goals and outcomes for the achievement of the SDGs (Sustainable Development Goals) during the remaining decade of action:

— Welcome the â€œSDG stimulusâ€ proposed by the UN Secretary-General, including through creation of new SDRs (Special Drawing Rights) and re-allocation of un-utilized SDRs to developing countries;

— Early solution to the debt distress of nearly 60 developing countries through effective operation of the G-20’s Common Framework and Bilateral arrangements;

— The mobilization by COP27 of at least $100 billion in climate finance, with half allocated to adaptation, accompanied by a financing facility for “loss and damage.”

— A review of the role of credit-rating agencies, with a view to reduce reliance on subjective, mechanistic evaluation of risk and consideration of measures to adapt their criteria to the unprecedented circumstances of the Pandemic.

— Discussion on a fair and inclusive tax regime that is developed through intergovernmental processes;

— A reform of the international trading system which should contribute to the achievement of the SDGs through export-led growth in the developing countries;

— Seeking an equitable international information technology regime that bridges the digital divide and enables the developing countries to ‘leapfrog’ into the global digital economy of the future, and,

Elimination of unilateral coercive economic measures imposed against developing countries that are inconsistent with the principles of international law and the UN Charter.