India’s Chenab bridge a bid to keep IIOJK under subjugation 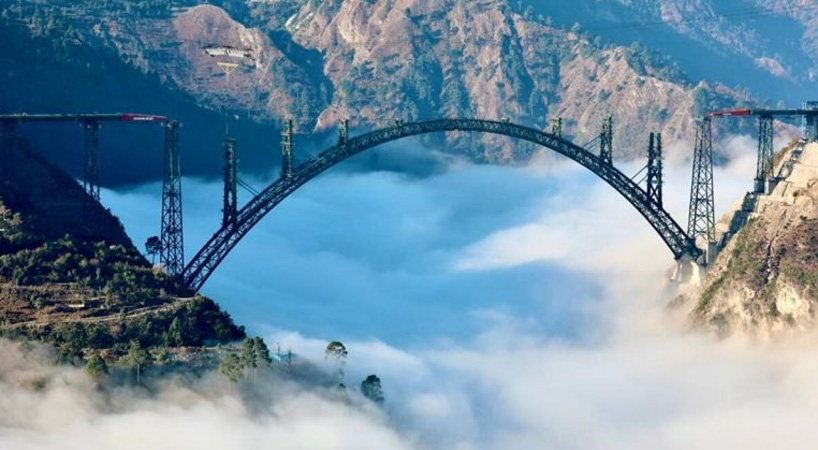 Jammu and Kashmir is an Indian Illegally Occupied territory under the United Nations Security Council resolutions but India is continuously taking steps to colonize the region through military means. India’s latest step to make the region more accessible for its military is the construction of a railway bridge on the Chenab river. Chenab railway bridge has been illegally constructed by India on the Chenab river to connect the disputed region of Kashmir with India’s massive rail network, making it more accessible for its military logistics and supplies.

This illegal project of India has sparked fears and worry among the Kashmiri people who are already facing blatant human rights abuses and terror at the hands of notorious Indian occupation forces. Kashmiris are well aware of Indian nefarious and colonial designs as Kashmir has been systematically stripped of its autonomy in recent years, and the construction of railway signals greater Indian control and unwanted transformation of the mountainous region. Kashmiri people and leadership have serious concerns regarding peace and stability of the region. They firmly believe that the railway will bring more instability to Kashmir which is already facing illegal Indian occupation and struggling with uncalled for and unjust demographic changes.

Kashmiris are certain that there will be a mass population shift in the UN-declared disputed region because of this bridge which will for sure destroy the identity of the region where India has been blatantly pursuing its colonial and imperial designs. Pakistan and India had fought over the Muslim-majority territory since 1947. Polls have shown that many in the Indian-controlled Kashmir want to merge with Pakistan or become an independent state. In recent decades, authorities have used oppressive tactics to suppress the ongoing freedom struggle of Kashmiris.

The Indian security forces have been resorting to grave human rights violations, including rape and extrajudicial killings. Indian security forces have been suppressing the peaceful political freedom movement of Kashmiris. In 1990, the Kashmir freedom movement was crushed with overwhelming and ruthless power of over 800,000 military and paramilitary forces.

These personnel never left the region and presently Kashmir is the most militarized region under one of the most brutal regimes of the world. India is looking to connect the disputed territory through the bridge to have a firmer grip on it with the ultimate goal to deny Kashmiris their right to self-determination guaranteed under the United Nations Security Council resolutions.

Since 2019, when the Indian government unilaterally changed Kashmir’s internationally recognized disputed status and imposed a region wide communication blackout to quell dissent, it has persistently pushed policies to cause demographic changes in severe violations of the United Nations human rights charter and international laws.

Afterward, the state was bifurcated into two territories separating Ladakh from Jammu and Kashmir. The age-old State Subject law was nullified and replaced with a new domicile ordinance granting millions of Indians domicile rights in Jammu and Kashmir. About 4.3 million Indian Hindus were granted domicile in Jammu & Kashmir. 2.5 million Indian citizens were issued ballots to vote in future elections of the disputed region.

The Election Commission of India recently announced plans to give voting rights to people who are temporarily living in the region, a move that has stirred outrage among native Kashmiris and local political leaders. The move is expected to add about 2.5 million voters to the region, including Indian military personnel, marking a 30% increase in the electoral rolls.

India has disregarded the UN resolutions and rejected the diplomatic efforts of Pakistan to resolve the Kashmir issue peacefully. The international community must take immediate notice of Indian illegal, unilateral and provocative actions and compel it to hold a plebiscite and let Kashmiris decide their destiny according to their wishes.