The writer is a research analyst at the Institute of Regional Studies, Islamabad

Afghanistan is a country, where national cohesion hardly existed. The theory of nationalism that unified various nations in early twentieth century, seems to be redundant in case of Afghanistan. Though Afghanis never allowed foreigners to settle in their territory, yet they have always provided room for ‘others’ to maneuver, owing to their disunity. The over […]

Freedom of press is an imperative prerequisite of democracy. Media brings forth voices of the people, and in people’s rule, people’s voice matters. Ironically, India the so called biggest democracy is strangling those journalists who dare to speak the truth. Since 2014, India is rapidly transforming from a secular democratic state to a Hindu majoritarian […]

India is a home to multicultural population of more than 1 billion. In the previous years, Indian constitution’s democratic and secular statusappeared as a founding stone of Indian polity. However, since 2014, under the leadership of second-time prime minister of India, Mr. Narendra Modi, the constitution of India that ensured the freedom of minorities and […]

Democracy is a relative term in today’s world. India is hailed as world’s largest democracy despite the fact that it has snatched away the basic right of freedom from Kashmiris. It’s been 50 days since Kashmiris are held hostage in their ‘own’ so called country. Historically, in the accession document Kashmiri state vowed to join […]

On the invitation of Prime Minister of Pakistan, Imran Khan, Afghan President Ashraf Ghani arrived in Pakistan on 27th June for a two-day visit aimed at strengthening ties between the two countries. The premier of Pakistan and President Ghani held a one-on-one meeting, in which an overall regional situation and matters pertaining to bilateral cooperation […] 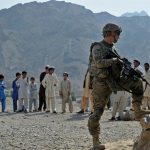 The Islamic State group in Afghanistan is “a very worrisome” threat to the United States, Marine General Frank McKenzie has said. He also added, “The ISIS in Afghanistan certainly has aspirations to attack the United States.” On June 13, a suicide bomber detonated an explosive device near a police vehicle in the capital of eastern […]