Can US negotiate a safe stay in Afghanistan?

The Islamic State group in Afghanistan is “a very worrisome” threat to the United States, Marine General Frank McKenzie has said. He also added, “The ISIS in Afghanistan certainly has aspirations to attack the United States.” On June 13, a suicide bomber detonated an explosive device near a police vehicle in the capital of eastern Afghanistan’s Nangarhar province, killing at least three officers and six civilians. The Islamic State of Iraq and the Levant (ISIL or ISIS) claimed responsibility for the attack through its Amaq website. Attahullah Khogyani, spokesman for the provincial governor, said security forces were the target of the attack. Several of the wounded were police officers. Taliban, presently, are holding peace talks with the United States in Doha, Qatar.

The recent attacks on Afghan forces, while the peace process is going on between Taliban and the US, might indicate that the IS is asserting itself as a force that can destabilise Afghanistan, and thus wishes to have a share in the peace deal. However, the Taliban see the IS as a US tool, meant to legitimise and prolong its stay in Afghanistan.

In 2015, the IS established its hold in the eastern province of Afghanistan. There are an estimated 3,000 IS fighters in Afghanistan. In recent months, IS has penetrated the northern province of Kunduz and the western province of Herat. The Western media is reporting that IS recruiters are active in Kabul and other major cities, attracting educated youth from universities. The IS is projected as a threat to American security.

So why is the IS reasserting itself and getting such substantial coverage in the Western media just as the US is negotiating a viable withdrawal plan with Taliban. The latest attack claimed by the IS is the first since November 28, 2018, in which 27 Afghan soldiers were killed. However, Taliban have so far proved themselves the only credible challenge to the US. They have shown the US that a complete withdrawal of foreign forces from Afghanistan is the only way to peace in the region. 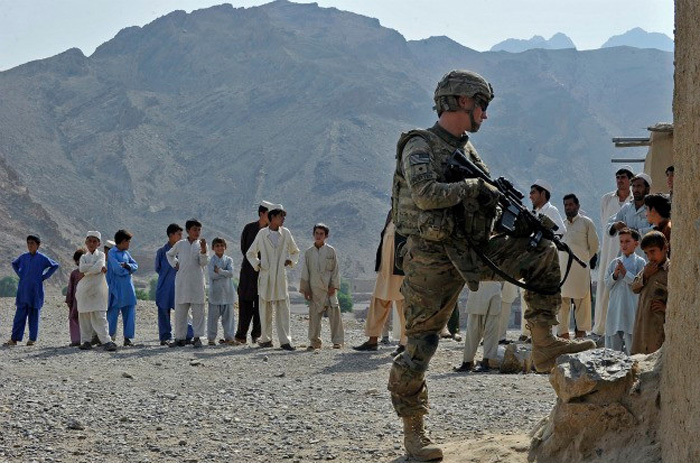 Taliban have been successful in making US seriously consider their demand for a complete withdrawal. Recently, Mullah Abdul Ghani Baradar, Taliban’s deputy leader, said his group was “committed to peace” and wanted to “end the occupation” of Afghanistan. During a round of peace talks in Moscow, Russian Foreign Minister Sergey V Lavrov also endorsed Taliban’s stance, and called for a “total pullout” of foreign forces from Afghanistan.

While Taliban and regional powers are calling for a complete pullout, the IS is reasserting itself. Taliban are also sceptical of IS role and the US apprehensions regarding the IS. Recently, Taliban spokesman, Zabiullah Mujahid, rejected Mckenzie’s assertion that the US is vulnerable to IS attacks. He also claimed that the Taliban had cleared many areas from IS. He said, “If American generals really fear Daesh, why are they avoiding its elimination and creating hurdles against mujahedeen operations? Statements of American generals are contrary to their actions.”

There are six American bases in Afghanistan. The US has spent an enormous amount of money on ‘securing’ its stay in Afghanistan. In 2018, during the peace talks, the US wanted Taliban to agree to letting it have at least two US bases, Bagram and Shorabak – a proposal Taliban rejected. It seems that the US will never want to completely withdraw from Afghanistan. It appears that by keeping its ‘safe’ presence in Afghanistan the US wishes to keep an eye on China, Iran and Russia.

US presence in Afghanistan is likely to benefit its ‘enduring strategic partnership’ with India. The ongoing peace process looks like a watershed moment. It appears that Americans intend to negotiate their ‘stay’ in Afghanistan rather than withdrawal. They wish to stay in the region for an indefinite period. However, Taliban are making their stay in Afghanistan painful. Even during the peace talks in Moscow, Taliban killed around 40 people in attacks across Afghanistan on May 28.

That is one reason why the US wishes to negotiate with Taliban. If only the withdrawal was the intention, the US would require no negotiations. It is not clear what the US is negotiating now with Taliban. Nevertheless, it is quite obvious that a complete US troop withdrawal is unlikely in the near future.

Afghanistan has become a major concern for all neighbouring countries including China. China and Pakistan have recently held talks with Taliban for promoting the peace process. China’s Xinjiang province shares a border with Afghanistan. China has also agreed to expand China Pakistan Economic Corridor to Afghanistan.

Analysts believe that a power-sharing formula has to be devised between the Afghan government and Taliban. But reality seems to be different. It appears that the US wishes to have a safe stay in Afghanistan. And for that a power-sharing mechanism has to be devised, not between Taliban and the Afghan government, but between Taliban and the US.

The writer is a research analyst at the Institute of Regional Studies, Islamabad