Intimidation of media in India

Freedom of press is an imperative prerequisite of democracy. Media brings forth voices of the people, and in people’s rule, people’s voice matters. Ironically, India the so called biggest democracy is strangling those journalists who dare to speak the truth. Since 2014, India is rapidly transforming from a secular democratic state to a Hindu majoritarian state. This transformation not only includes vilification of the Muslim and other minorities in India but also a tougher stance against journalists and media outlets who try to report facts.

The BJP government blocked an Indian channel, Media One for 48 hours as it was covering February’s biggest story of mob attacks on Muslims in New Delhi. The vicious cycle of terrifying unbiased media in India, does not stop here. The coercive tactics of BJP government have become life threatening for journalists. A fierce journalist Gauri Lankash was killed in 2017 as she was skeptical of Modi’s policies. In an interview with Narada News, she criticized BJP’s “fascist and communal politics” and said, “my Constitution teaches me to be a secular citizen, not communal. It is my right to fight against these communal elements.” Sadly, she lost her life, while preserving her principles.

Shujaat Bukhari, an internationally acclaimed journalist of Jammu and Kashmir who advocated a peaceful solution of Kashmir by involving all stake holders, was killed in June, 2018. After revocation of article 35 A in Kashmir, the situation has worsened for Kashmiri journalists. Ms Masrat Zehra, a freelance photojournalist had been booked for anti-national posts on Facebook. Another Kashmiri journalist Gawher Geelani who works for German public broadcaster Deutsche Welle is also facing investigation from Jammu and Kashmir police for ‘unlawful activities’ of covering the resentful atmosphere prevalent in Jammu and Kashmir. 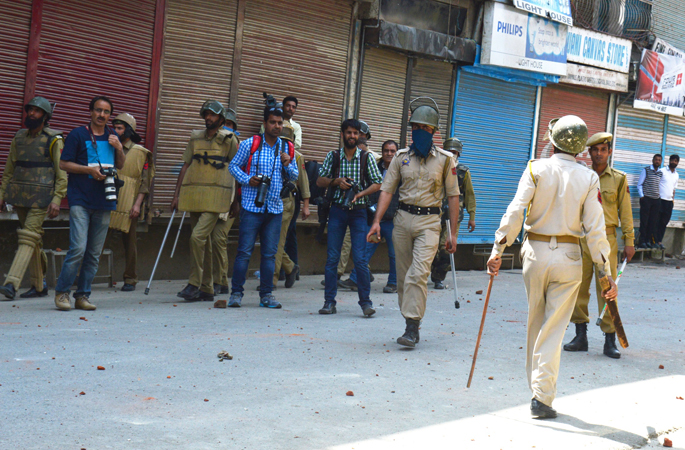 It is not just Jammu and Kashmir; the wrath of BJP is for all those who dare to speak against Hindutva led policies of Modi. Editor in chief of Hindustan Times, Bobby Ghosh resigned from his post as he was allegedly forced to stop ‘Hate Trakker’ from the newspaper. The Hate Trakker was a noteworthy initiative of Ghosh to highlight growing Hindutva related hate crimes in India. He resigned in September, 2017, and from then on, Hate Trakker has disappeared from Hindustan Times.

Hassan Minhaj, an American comedian, was barred from entering ‘Howdy Modi’ rally in the US, as he made jokes about Modi in his shows. ABP News anchor Punya Prasun Bajpai wrote an exposé for The Wire’s Hindi website, in which he revealed how Mr. Modi’s government stopped him from taking name of Mr. Modi on his show. Cobrapost, an Indian news website, famous for undercover investigative journalism revealed that Indian media’s leading giants like, Times of India, India Today Group have succumbed to directives of Modi’s government by highlighting ‘only’ the positive news about Mr Modi.

Intimidation is not the only tool implied by the BJP government to impede freedom of press. Those who dare to speak the truth, also face financial crunch. In mid-2019, the BJP government decided to stop purchase of adverts in three main English dallies of India, The Hindu, The Telegraph and Times of India.

Under Modi’s government only those Media outlets which lionize Modi and his policies, are at ease. Indian Media’s coverage of Balakot strikes is a glaring example of blind pursuit of government’s narrative by Indian Media. The scrapping of article 370 A in Kashmir resulted in 10,000 people coming to streets protesting the move, and rejecting it. On the contrary, Indian media was silent on the protests. BBC South Asia Bureau Chief Nicola Careem posted a video of people in Kashmir protesting against the government move, rebutting the Indian claim that Kashmiris have accepted the government decision.

The disgruntled youth in Jammu and Kashmir have embraced freedom fighting by erupting into small militia groups. Recently, a new group, The Resistance Front in Kashmir attacked the Indian security personnel in Handwara, killing 5. Indian media, as usual projected it as a Pakistan sponsored attack. Two militants were killed during the encounter; both were local citizens. Fear of huge funeral processions stopped the authorities to hand over the bodies of slain militants to their relatives. If Kashmiris are happy with India then why its journalists are being booked, why there is still lockdown, why there is no communication allowed? The utter dissatisfaction in Kashmiris is hardly a subject of majority Indian media groups.

Instead, it has become a habit of ‘tamed’ Indian media to blame everything on Pakistan or Indian Muslims. The novel COVID-19, is also being associated with Indian Muslims. Tablighee Jamaat of India is considered responsible for coronavirus spread in India. Ironically, on 8th May, Indian Express published a story that a viral video in which Jamat’s head Mohammad Saad Kandhalvi is seen advising his followers to abstain from social distancing, is doctored. Later, the reporter, Mahender Singh Manral was summoned by Delhi Police for questioning. Hence, the video on the basis of which Indian Muslims were being targeted was fake, and the reporter who reported about it, is facing the ‘consequences’.

The tactics of intimidation by Modi’s government also involve judiciary of the country. According to a story published in New York Times, when the lockdown to contain spread of Covid 19 in India, resulted in stranding migrant workers, with some dying on the roads, Mr Modi’s lawyers team persuaded India’s supreme court to order all media to publish ‘official’ version of the coronavirus developments.

The process of strict control over ‘disagreement’ with the BJP’s government policies has now engulfed the media also. It is ironic to note that Prime Minster Narendra Modi spent all his previous tenure without addressing even a single press conference. From the time he came to power, he has distanced himself from the media. Instead, he chose to communicate with people through radio program of Munn ki baat or tweets. Democracy, that worked like glue for India to ensure unity, no longer exists. Without democracy the survival of ‘united India’ is under question.

The author is working as a research analyst at Institute of Regional Studies, Islamabad