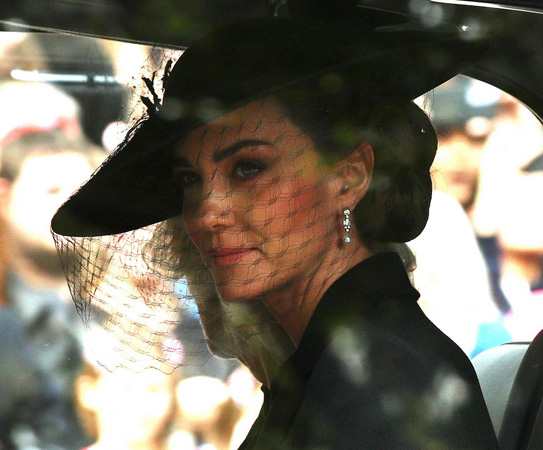 A royal tribute. Kate Middleton and Meghan Markle both wore accessories honouring Queen Elizabeth II during the reception of the late monarch’s coffin at Westminster Hall in London on Sept. 14.

For the ceremony, the newly dubbed Princess of Wales donned a diamond and pearl leaf-shaped brooch that had once belonged to Her Majesty. As noted on the website The Court Jeweller, the queen wore the piece during a visit to Seoul, South Korea in 1999, and Kate has been photographed wearing the accessory on previous occasions, including a 2017 commemoration ceremony of the Battle of Passchendaele in Belgium and the 2018 Festival of Remembrance in London.

As for the Duchess of Sussex, she wore a pair of pearl and diamond earrings she received from the queen ahead of their first royal engagement together in 2018.

Meghan and Kate were among the many family members at the service. Their husbands Prince Harry and Prince William were also there as were the queen’s children and their spouses, including the newly proclaimed King Charles III and his wife Queen Consort Camilla, Princess Anne and her husband Sir Timothy Laurence, Prince Edward and his wife Sophie, Countess of Wessex and Prince Andrew.

Prior to the service, the queen’s coffin was passed from her family to the State in a silent procession from Buckingham Palace to Westminster Hall, with Charles, William and Harry walking behind the coffin along with hundreds of soldiers.

The queen’s coffin will lie in state for five days at Westminster Hall, giving members of the public the opportunity to pay their respects following Her Majesty’s death at the age of 96 on Sept. 8.