‘Maarrich’ to release on December 9

* The 'Golmaal' actor will be playing the role of a cop 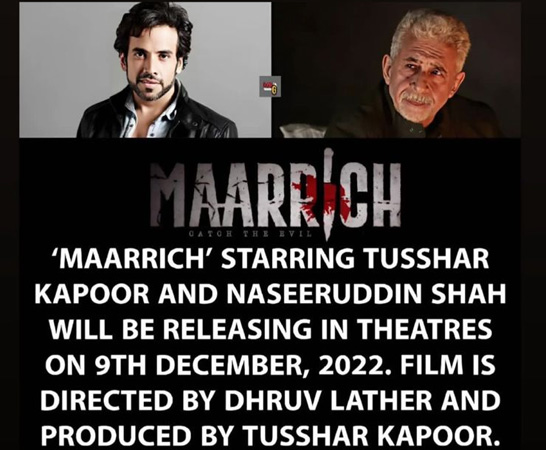 Film Maarrich Starring Tusshar Kapoor and Naseeruddin Shah will be released all across the world on the 9th of December.

Earlier today, Kapoor announced the news via his Instagram handle.

He wrote: “Caution, you are about to get tangled in the world of #Maarrich. Catch the evil! Trailer coming soon! In cinemas on 9th December 2022.”

The Golmaal actor will be playing the role of a cop. The actor is super excited for this new venture, says: “This film is very close to my heart for multiple reasons. Maarrich is my second film is my second film after Laxmii as a producer.”

He further added: “I am also going to be reuniting with Naseeruddin Shah Saab after a very long time.”

Tusshar in a statement also said: “The film has challenged me as an actor on many levels as it’s very different from the work that I have been associated with earlier, I hope the audience like this new shade of mine”, reports IndiaToday. The film was announced last year in January. Dhruv Lather directorial film Maarrich will be produced under the banner of Tusshar Entertainment House.