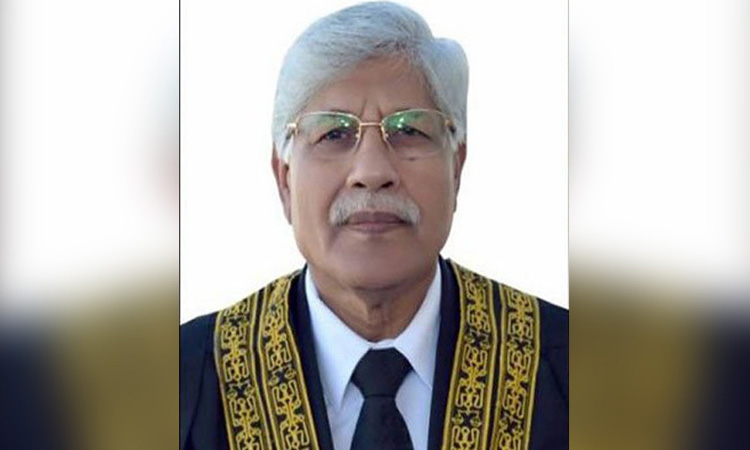 Former Gilgit-Baltistan (GB) chief justice Rana Shamim on Monday issued an unconditional apology to the Islamabad High Court (IHC) in the contempt of court case against him.

The case was initiated against Shamim after he had signed an affidavit, wherein he had levelled allegations against ex-chief justice of Pakistan Saqib Nisar about him manipulating judicial proceedings to deny bails to the top PML-N leadership before the general elections in 2018.

Shamim was formally charged by the IHC for allegations he levelled against former CJP in a signed affidavit in London. Shamim’s lawyer Abdul Latif presented a written apology that stated that the former GB top judge listened to ex-CJ Nisar’s views during a meeting with him over tea. “[…] I had heard the words ‘senior puisne judge’ time and again from the [former] CJP during the gathering at the tea in the lawn,” Shamim wrote in the apology.

He stated that he was under extreme mental stress and was a “serious heart patient” aged 72 when he wrote down his affidavit “after approximately three long years” since the meeting that he mentioned above.

According to Shamim, this was why he fell “victim to a misunderstanding” and wrote the name Justice Aamir by mistake instead of “senior puisne judge” in the affidavit. He said that he now “deeply regrets the grave mistake” that he inadvertently made and sought an unconditional apology for it.

Shamim further stated that he has been showing regret and has been apologising for the misunderstanding on his part, since the start of proceedings in the contempt case.

“I cannot even fathom of scandalising the very institution I have served so dearly and with the utmost professionalism,” he said.

“I reiterate that no sitting judge of this honorable court involves in controversy mentioned above. I tender unconditional apology to all sitting judges of this honourable court for the grave misunderstanding and mistake on my part and place myself at the mercy of this […] court with humble request to graciously forgive me,” the apology concluded. Last week, the IHC had issued a deadline for Shamim to submit the list of witnesses in his defence in the contempt of court case. The high court said that if Shamim does not submit the list of witnesses by September 12, it will be assumed that his affidavit is not valid. The prosecution has submitted a list of four witnesses, which does not include former chief justice of Pakistan, Saqib Nisar.

During the hearing, Chief Justice Athar Minallah remarked that the court does not apply defamation laws to the judges based on mere criticism and will ensure a fair trial. “If that affidavit is true, it is Rana Shamim’s job to prove it right,” he added. The chief justice said that Shamim wants to apologise, however, he should first prove what was said in the affidavit. “If he fails to prove it, then Rana Shamim should call it a misunderstanding and apologise. It will then be taken into consideration,” he said. CJ Minallah remarked that the court will find what is true, adding that the court will not take any action against Shamim if he proves that he is right.