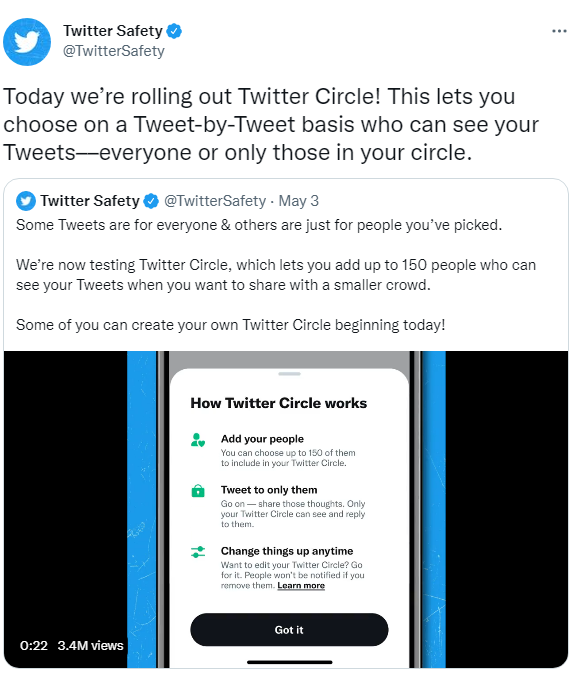 Twitter Introduces ‘Twitter Circle’, a new feature. The latest feature on popular Social networking site Twitter lets its users choose audience for their tweets. With this feature called Twitter Circle, users can choose if everyone or only specific followers in their circles can view, like or reply to their tweets.

This feature was out on Tuesday. The statement for the release said that the reason behind modification of Twitter is “a new way to tweet to a smaller and limited crowd”.

According to Twitter, the feature makes it easier to have more personal conversations and build better connections with selected and limited followers.

However, users have to apply the feature every time they start tweeting on the tweet-by-tweet basis. By this feature they can see who is in their Twitter Circle and who can be allowed to see and interact to them on that certain post. Moreover, the tweets of Twitter circle cannot be retweeted, giving users control over who can engage with their tweets.

Twitter started testing the feature in May and made it available for global users of the application after receiving an “overwhelmingly positive” response.

The feature can is available on all of Android, iOS, and twitter.com globally.

Before you post a tweet, you will get an option to either share it within your circle or allow everyone on your list to view it. Twitter Circle allows adding up to 150 people. It also lets us adjust who can be included and excluded at any time.

Whether you follow someone or not, they can be in your circle. Once you add them to your circle, they’ll be able to see your tweets and replies.

Twitter website: “Don’t worry, no one will be notified of any changes you make to your circle,”

“Tweets sent to your circle will appear with a green badge underneath them,” it added. The tweets will be visible only to selected audience of your circle. Retweets and shares not included in the feature.

Twitter added, even if a user’s Twitter is public, all of the replies to such tweets will remain private.