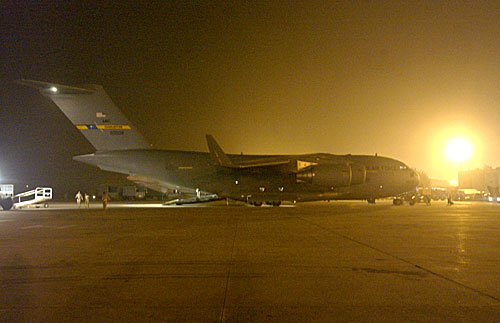 The Ambassador of UAE to Pakistan Hamad Obaid Ibrahim Al-Zaabi handed over the relief goods to Minister for Planning Development and Reforms Professor Ahsan Iqbal at the Base.

Meanwhile talking to media, Minister for Planning and Development said that international community has expressed solidarity with Prime Minster Mian Muhammad Shehbaz Sharif and assured them their full support for the relief and rehabilitation of the people, which effected due to recent flash floods.

He said that many other countries including Europe are being sending relief goods to Pakistan in order to strengthen government’s efforts of rescue, relief and rehabilitation, adding that a consignment carrying tents from friendly country China will also reaching soon, which would immediately to be provided to flood effected people.

The country was facing swear challenges due to devastating flash floods, he said adding that government in collaboration with international organizations and people would soon overcome this natural calamity and will use all resources for the rehabilitation of the people.

The minister reaffirmed the government’s commitment to make all efforts for the rehabilitation and reconstruction of all houses and other basic infrastructure damaged due to floods and said the efforts would be continued till the rebuilding of the last house and enabling last effected people to stand its own feet.

Ahsan Iqbal said that provinces of Sindh and Balochistan were badly effected due to recent torrential rains and flash floods making devastation on a large scale as many links of roads, houses, bridges and railways infrastructure destroyed.

Besides, he said that the floods also put devastating impact on local agriculture sector as it destroyed standing crops of cotton, sugarcane and maize on million of hectares. He said that cotton, which was the major cash crop of the country was badly effected in Sindh and Punjab provinces, adding that in Punjab the areas including Rajanpur, Dara Ghazi Khan and other areas were badly effected due to worst floods in the history of the country.

He said in Northern Areas, Chitral, Dir, Swat and other areas were also affected,adding that National Disaster Management Authority was taking stocks of the losses, adding that government was providing its full assistance to provincial governments for conducting rescue and relief operations.

He said that government has expedite its relief and rescue operations and started to ensure provision of the items of basic needs to people of flood hit areas, adding that the supply of the relief goods received from abroad would also be expedited to provide maxim assistance to people of those areas.