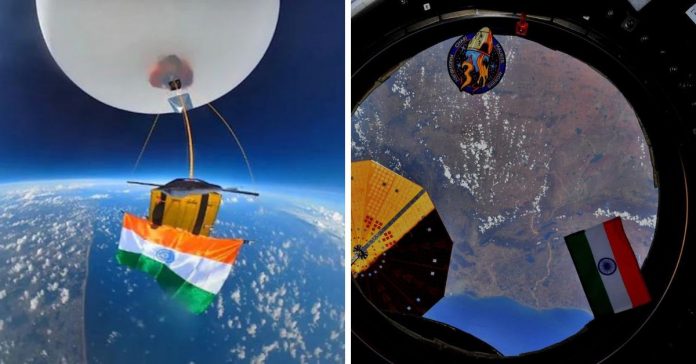 Space Kidz India raised the Indian flag nearly 30 kilometers above the earth as part of the country’s celebration of its 75th anniversary of independence. The flag was carried on a balloon and raised to a height of 1,06,000 feet above the surface of the globe.

Space Kidz India is an organization creating “young scientists for the country and spreading awareness among children for a borderless world.” The organisation recently launched a satellite into Low Earth Orbit. AzadiSAT was developed by 750 girl students from across India to mark the 75 years of Independence.

While the satellite was lost, due to orbital issues, as the Small Satellite Launch Vehicle (SSLV) that launched it into space failed to place it into a circular orbit around the planet, the organization managed to create an ecosystem and a process to develop small satellites.

On Indian Independence eve I’m reminded of Indian diaspora that I could see from @Space_Station where my immigrant father’s home town of Hyderabad shines bright. @nasa is just 1 place Indian Americans make a difference every day. Looking forward to @IndianEmbassyUS celebration pic.twitter.com/4eXWHd49q6

India will aim to become a developed nation within 25 years, Prime Minister Narendra Modi said in a national day address on Monday, with policies to support domestic production in power, defence and digital technology.

Speaking from the 17th-century Red Fort in Delhi as India celebrates its 75th year of independence from British colonial rule, Modi urged the youth to “aim big” and give their best years for the cause of the country.

“We must turn India into a developed country in the next 25 years, in our lifetime,” said the 71-year-old Modi in his 90-minute-speech in Hindi.

“It’s a big resolution, and we should work towards it with all our might.

Following a 21-gun salute, reportedly executed using howitzers made domestically for the first time under Modi’s “Make In India” industrial strategy, the prime minister said Indians should shed “colonialism in our minds and habits”.

“Hundreds of years of colonialism has restricted our sentiments, distorted our thoughts. When we see even the smallest thing related to colonialism in us or around us, we have to be rid of it,” Modi said.