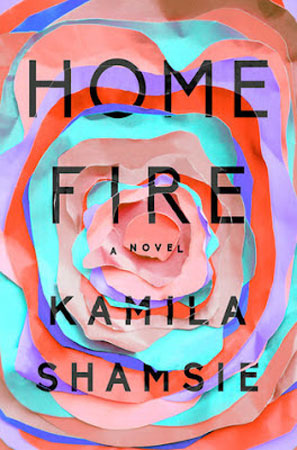 Home fire is the kind of book you should most definitely read, not only because it’s smart, but also because it’s well written, and that is always a good incentive to read anything. Kamila Shamsie’s writing, so amateur and unpolished in her earlier novels like In the City by the Sea, just keeps getting better and better. And while Home Fire is not my favourite Shamsie work (Burnt Shadows wins hands down), it’s still a very very close second.

It’s supposed to be based on the 5th century tragedy Antigone by Greek writer Sophocles, but it’s ok if you know nothing about the play. That doesn’t detract from the actual enjoyment of this novel, which focuses more on its characters and their motivations, and less on whether it’s a faithful adaptation of the original. At the beginning of this tale, Isma, the elder sister of twins Aneeka and Pervaiz, has just accepted a scholarship to America and finds herself breathing in freedom for the first time since the death of her mother and her elevated status as temporary guardian for her younger siblings. With a missing jihadi father dead in Guantanamo, the Pasha siblings have always lived haunted by their father’s legacy, but Pervaiz’s decision to follow in his father’s footsteps sets off a more haunting chain of events that extends all the way to the British government’s doorstep.

“Grief was what you owed the dead for the necessary crime of living on without them.”

Adil Pasha, the father to our first protagonist, is already dead at the beginning of this story, but his life choices are what lead to the chain of events that rapidly unfold. Divided into five sections, this story is initially told from the point of view of Isma Pasha and her initial meeting in America with Eamonn, the British Home Secretary’s son. After moving back to the UK, Eamoon’s point of view, next in line, involves his meeting with Aneeka, one of the younger Pasha twins. By the time mention of the other twin, Pervaiz, comes up in Eamoon’s part of the story, we are moving into Pervaiz’s point of view, a jump from UK to the heart of the Islamic state.

He could simply present himself there: I made a mistake. I’m prepared to face trial if I’ve broken laws. Just let me go to London. But he was the terrorist son of a terrorist father… He didn’t know how to break out of these currents of history, how to shake free of the demons he had attached to his own heels.

At this point it’d be unfair to give too much of the story away, especially since it’s already an adaptation of a play.

In a session during Karachi Literature Festival held this weekend, Kamila Shamsie said, in answer to an audience question, that she specifically did not use direct quotes from Antigone because she wanted the story to be read on its own.

And while of course it’s inevitable that previous readers of Antigone will see the similarities, it is true that this novel, whose weight is supported by amazing characterization and great writing, stands high enough on its own (so as to be nominated for the Man Booker Prize this year).

Everything else you can live around, but not death. Death you have to live through.

Usually I take copious amounts of notes when I’m reading a Pakistani novel because they are useful when I’m later writing my review. With Home Fire, I’m glad I didn’t do that. Instead of stopping and jotting down points every few pages, I tore through this book in a day and a half, and the experience was worth this rambling, incoherent thought process, because some books deserve to be enjoyed without stopping. With Home Fire, there is a certainty that it will be analysed, studied, and scrutinized. It’s the kind of book that becomes the subject of multiple university assignments and thesis topics. But that kind of analysis requires a kind of detailed academic look, and what I’m telling you is a purely reader-based exploration, which focused on the plot and the dynamics and the in-depth characterization, and while the nerd part of me revelled in the deft exploration of race and gender and religion, it was just a very good book. Period. daily