The Unbearable Weight Of Massive Talent: A coming of Cage bromance for all ages 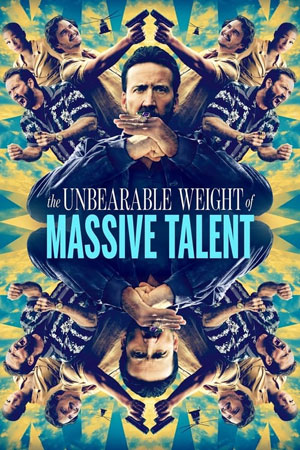 Within the first 10 minutes of the film, you witness a Nicolas Cage fangirl being kidnapped while she’s enjoying one of his movies on a TV set. Next: Nicolas Cage, posing as Hollywood star Nick Cage (basically, himself), is evidently going through a rough patch in his career and his personal life. His alter-ego, modelled on one of his younger avatars from his movie, Wild At Heart, continues to remind him that he’s a movie star, and not an actor that he’s now trying to be. His therapist asserts that he works too much, and his ex-wife and daughter (Sharon Horgan and Lily Mo Sheen) believe he’s too occupied with himself to let the attention veer towards anyone else. He loses out on a role that he was eager to lay his hands on.

In short, Nick Cage’s life is on a slippery slope with monetary and emotional debts piling on. At this juncture, he accepts an offer to pay a visit to his fan, Javi (Pedro Pascal) in Spain on his birthday for a million-dollar fee. What kicks off from this point is a pleasant and unlikely bromance between Nick Cage and Javi which takes a serious turn when the CIA gets involved and asks Cage to help them nab an international criminal, presumed to be Javi. This lands Javi and Cage in a mess. How Cage pulls himself, his ex-wife and daughter (both fictional characters created for the fictitious Nick Cage in this movie), and Javi out of this sticky situation forms the climax.

Co-written and directed by Tom Gormican, this movie largely invests in an unlikely friendship between Pascal and Cage’s characters, which turns the proceedings into a pleasant buddy ride. Javi and Cage belong to such diametrically different worlds, and yet, there’s something extremely likable about their camaraderie and the kind of bond they kindle over movies and life experiences. Instead of taking a self-indulgence route in a film about a movie star, this film chooses to thrive on the bromance between a fan and a star without making the proceedings nauseatingly narcissistic. On the contrary, it’s decorated with well-timed humour and some action scenes, too.

Nick Cage and his alter-ego form a really small part of the narrative. More attention has been paid on building Nick Cage as a character who is conflicted internally about where he sees himself going – at one lowly point, he even decides to quit acting altogether. The screenplay smartly infuses straight-faced humour and sarcasm using some timely references to Cage’s films like Paddington 2, Con Air, Mandy, Moonstruck, The Croods 2, Captain Corelli’s Mandolin and Face/Off among others. Pablo Pascal’s character Javi is the sort of fan every star would secretly love to have – which is again spotlighting the character-build-up.

The film blends elements of a Hollywood-insider haha-fest, a spy movie and a breezy bromance into a funny and tasteful script. Although it is hard to imagine these ingredients in one pot, the result works wonderfully on the screen – thanks to the chemistry between Pascal and Cage, their shared world in the film which has its own kind of rulebook that one laps up, and the fact that none of the aforementioned elements become overbearing at any given time.

On the flip-side, the satellite characters, including Sharon Horgan and Tiffany Haddish (one of the CIA operatives in the film) have limited material to chew on, with most of the screen-time dedicated to the boys. The runtime feels a tad sluggish towards the climax, especially because at some point, mid-way through the film, you can begin to predict where this one’s going to really end.

To sum up, this meta-comedy is a joy ride for those who’re chest-thumping Nicolas Cage fans. The rest may go back with a list of films to watch, which will eventually turn them into fans, too.