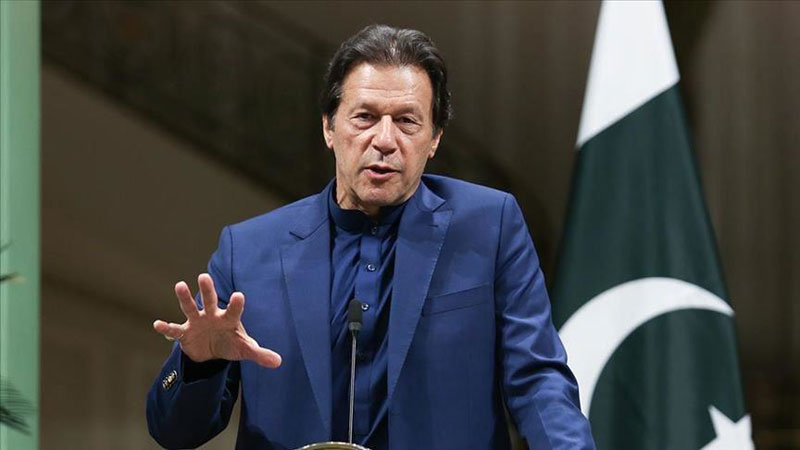 Imran took to his official Twitter handle to “strongly condemn the persecution and arrest” of Haleem Adil.

Declaring the act “pure fascism”, Imran claimed that it reflected the Zardari-Sharif clan’s “mafia’s approach of eliminating those they cannot purchase”, which he maintained was “absolutely unacceptable in any democracy”. MPA Haleem Adil Sheikh was arrested by the Anti-Corruption Establishment (ACE) in a case pertaining to a land scam allegedly carried out over three decades ago in Malir, Karachi. A team of ACE Karachi nabbed Sheikh on Wednesday around 3 pm from the ACE office in Jamshoro district where he had appeared to record his statement in another FIR of acquiring land allegedly in a fraudulent way in Jamshoro.

He has been accused of causing a loss of Rs160 million to the exchequer by forging the land record to get four acres of land and for further encroaching on another four acres of adjoining land. The land was obtained on a lease of 30 years for poultry farming but a farmhouse was later established in the name of palm village.

“Sheikh’s life is under threat from the Sindh government,” alleged Dua Bhutto, the PTI leader’s wife in a video statement.

“He is being moved around in different areas of Sindh in a private vehicle and that too without security,” she claimed. The ACE was supposed to shift him to Karachi where he would be produced before the concerned court for remand on July 28.

In another tweet, ex-prime minister Imran Khan stated that he had ordered the government of Punjab to “immediately provide flood assistance to ppl in the devasted areas of South Punjab” and affected regions of Mianwali.

He added that he had asked the Khyber-Pakhtunkhwa government to immediately “provide flood relief” to those in affected areas of Balochistan.

Earlier, Haleem also appeared before the provincial anti-corruption court to defend the allegations of raising a loan from a bank on the basis of fake property documents. During the hearing, the court inquired about the number of accused in the case.

At this, the investigation officer said that there is only one accused. Haleem’s counsel, Advocate Javed Altaf maintained that Haleem is the leader of Opposition in Sindh Assembly. The argument drew the court’s ire as the judge remarked that he knows what the counsel told but Haleem didn’t appear before the court despite being notified. The prosecution maintained that Haleem did not appear on purpose to record his statement. He said that the disputed land had been acquired for setting up a poultry farm but it was used for another purpose. Responding to the arguments, Advocate Altaf maintained that the case is 33 years old. At this, the court rectified that it is 31 years old, not 33. Later, the court reserved the verdict over petition for Haleem’s physical remand. The verdict was scheduled to be announced after 2:30pm but hasn’t been announced yet.