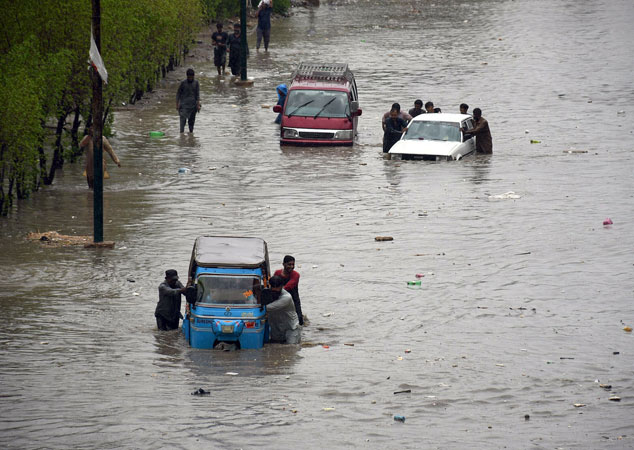 Residents of coastal areas of Sindh and and Balochistan have been warned that a low-pressure area (LPA), developing over the Northeast Arabian Sea and adjoining Gulf of Kutch, has intensified and could cause strong gusts of wind and heavy to extremely heavy showers in the coastal regions over the next couple of days.

According to an advisory issued by the Pakistan Meteorological Department (PMD) on Saturday, it warned of a depression – an intense low-pressure area developing around 340 kilometers south east of Pakistan’s coast. Consequently, the wind has gained picked up speed in coastal areas. As the storm moves towards Pakistan, the wind is expected to intensify into strong gusts raging at 50-55 kilometer per hour with chances of heavy to extremely heavy rains in the coastal areas of Sindh and Balochistan. The government has put all concerned authorities on high alert for the next 36-48 hours following the forecast and asked the PMD to regularly inform all departments about the changing weather condition. Widespread wind-thunderstorms/rain-showers with scattered heavy/very heavy falls, extremely heavy at times, are expected in coastal areas of Sindh including: Karachi, Hyderabad, Thatta, Badin, Mirpurkhas, Tharparker, Umerkot, Sanghar, Shaheed Benazirabad, Nausheroferoz, Tando Muhammad Khan (TMK), Tando Allayar (TAY), Dadu, Jamshoro, Sukkur, Larkana, Jacobabad, Shikarpur and Ghotki districts of Sindh till 18 July. Lasbella, Uthal, Ormara, Pasni, Gwadar, Jiwani, Turbat, Awaran and Ketch areas of Balochistan are expected to experience similar weather from July 17-18.