‘Sherdil — The Pilibhit Saga’: Pankaj Tripathi and cast’s performances are the heart of absurdist life-and-death drama 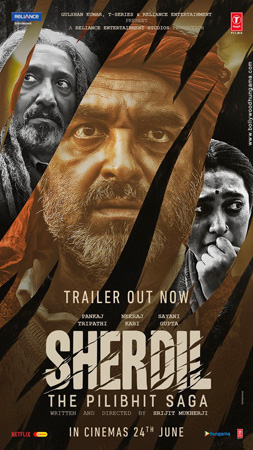 Presented more in the manner of a drawn out growl than an earth-shattering roar, Sherdil – The Pilibhit Saga focuses on the man-animal conflict in a village on the edge of a tiger reserve. Somewhere down the line, the film widens its scope and encompasses institutionalized government neglect of the marginalized and its repercussions.

The protagonist of the prolific writer-director Srijit Mukherji’s second Hindi film – his third is due for release in three weeks – is an oddball headman of a speck-on-the-map village. Determined to prove his mettle as a leader of his impoverished, beleaguered people, he takes an extreme step in the hope of giving them a new lease of life.

The absurdist life-and-death drama that ensues is punctuated with doses of dark humour and an empathy for the plight of the poor who are left to their own devices in the face of insuperable odds. The film shifts from the sardonic in the first half to the pop-philosophical in the second before winding up in a courtroom where the legal arguments seek to separate the grain from the chaff.

The tonal transitions aren’t perfectly seamless, but a controlled lead performance by Pankaj Tripathi (who incorporates interesting new shades into a village bumpkin persona), a solid supporting hand from the ever-reliable Neeraj Kabi (despite sporting avoidable dreadlocks and spouting wry witticisms), a musical score that soars on the back of a slew of earthy songs, and an unfussy depiction of a dispossessed community drowning in its own haplessness help the film skirt around the pitfalls of conventional melodrama and rhetoric.

In delivering its humanist message, Sherdil – The Pilibhit Saga, based on true events that were reported in 2017, treads the thin line between the simple and the simplistic and faces the danger of tipping over into the latter. The title obviously refers to the hero’s derring-do, but the film defies the conventions of the genre and adopts terse, direct methods to showcase a man’s despair and ill-advised bravado.

Pilibhit, a short film made in 2020 by first-time directors Ashutosh Chaturvedi and Pankaj Mavchi, in 2020, is inspired by the same real-life story. It is a solemn account of a poverty-stricken flute-maker whose morality wavers when he is faced with a choice between earning a quick buck and saving a dear one. Pilibhit was filmed in actual locations.

Sherdil – The Pilibhit Saga was filmed in North Bengal. While, on one level, this dilutes its authenticity quotient might, on another it lends the story a universal, fable-like quality.

In a largely good-humoured way, the film projects the hero not so much as a lion-hearted saviour as a foolhardy do-gooder. He isn’t a paragon of courage in the conventional sense nor is he an embodiment of brash masculinity. His act of defiance is, in a way, an admission of defeat, a response to his failure to solve the problems of his village.

In a lively opening sequence, the protagonist appeals fervently to a cynical government official who advises him to submit his suggestions online because he is told (to his inevitable bafflement) that all of India has gone digital. The communication gap establishes exactly what Gangaram (Tripathi), the simple-minded and unlettered sarpanch of the village of Jhundao, is up against. Getting a slothful government to act is far more onerous than getting in the way of a hungry tiger on the prowl.

Gangaram’s village, where standing crops are repeatedly destroyed by rampaging wild animals, grapples with hunger and hopelessness. In his innocence, the headman believes that the government has the will to intervene and end the villagers’ misery.

After several entreaties to an apathetic bureaucracy prove infructuous, the exasperated 46-year-old man decides to take matters into his own hands. He does so against the wise and practical counsel of his wife Laajo (Sayani Gupta).

On one of his many treks to the city, he spots a notice announcing government compensation of 10 lakh rupees for anybody who falls prey to a tiger while working in his field. Gangaram has a brainwave and suggests to the other village elders that he will do his people a good turn by letting a tiger maul him to death.

One may quibble that the satire that hinges around a man who means well but knows no better isn’t biting enough, but the points made by Mukherji’s uncluttered screenplay and the dialogues written by him, Sudeep Nigam and Atul Kumar Rai do hit home at times, even if only in a somewhat facile manner.

While upturning the predator-prey and benefactor-beneficiary relationship, Sherdil – The Pilibhit Saga touches upon religious and class divides, the politics of food (meat in particular), the long-term effects of deforestation, and the precarious state of those who have been robbed of access to their natural resources.

These pertinent conversations take place between Gangaram (as he waits for a tiger to attack him) and a seasoned hunter he meets in the forest. Certain parts of the parleys strain credibility because the protracted encounter rests on the tenuous presumption that Gangaram, a man who has spent his whole life in a village on the edge of a forest, has no idea what the jungle is all about.

Gangaram lives with his ageing mother (Sohag Sen), wife and two pre-teen children. He takes his position as village sarpanch so seriously that he lets everything else take a backseat. He, however, makes it a point to seek his wife’s permission before he sets out for the jungle.

In the forest, Gangaram runs into poacher Jim Ahmed (Neeraj Kabi), named after who else but Jim Corbett. The latter teaches the earnest altruist a thing or two about the failings of mankind, animal instincts, the mysteries of the jungle and, in a sudden scatological turn that is at variance with the tone of the rest of the film, on how human excreta, no matter what one is ordained to eat by one’s faith, makes no distinction between one religion and another, once strata of society and another.

The top-flight performances from Pankaj Tripathi, Neeraj Kabi (delightfully restrained) and Sayani Gupta (who has limited footage but shines nonetheless) constitute the heart of Sherdil – The Pilibhit Saga. The film also has a wonderful sound design (by Adeep Singh Manki and Anindit Roy) that captures the cadences of the jungle and the rhythms of the understated drama remarkably well.

Shantanu Moitra’s background score and songs are in sync with the spirit and substance of the film. Sant Kabir (Do din ki zindagi hai do din ka mela and Moko kahaan dhoonde re bande), Gulzar (Dhoop paani behne de, in KK’s voice) and itinerant folk musician Rahgir (Aadmi bhutiya hai, with one crucial word in the song strategically euphemized) embellish the soundtrack.