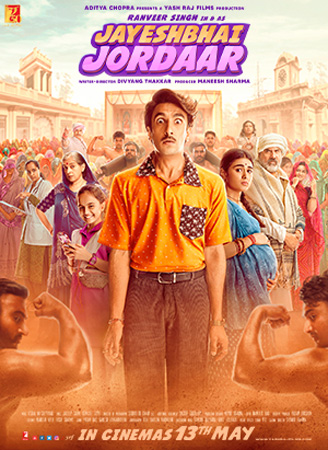 Just before Jayeshbhai introduces his family members to us, he draws a rather silly analogy between scientists wanting to know about Mars and his parents wanting to know about the gender of his child. What’s common between a planet a woman’s womb? Well, they’re both round (gol) in shape. Some Gujju humour to set the tone and expectations right. Director Divyang Thakkar gives the disclaimer in the first scene itself that ‘pre-natal sex determination test is a punishable offence’. And the entire premise of Jayeshbhai Jordaar is centred around this. (Also read: Modern Love Mumbai review: Dhruv Sehgal, Hansal Mehta’s beautiful stories are worth going through anything)

Ranveer Singh in the titular role has a lot to accomplish: abolish female foeticide, end patriarchy, empower women, save the life of his unborn daughter and rebel against his family.

One thing that I couldn’t understand till the end is why the film was set in Gujarat? Why not some town in Rajasthan or Uttar Pradesh, where such practices are nothing new. Was it the Gujarati flavour and giving Ranveer a rather funny makeover and character that the director felt would work with the audience? Is Jayeshbhai just an avenue to let Ranveer experiment with his range as an actor? Well, let me tell you, even in this otherwise ‘restrained’ role, he goes over-the-top more often than you’d expect.

The film starts with Jayeshbhai Patel (Ranveer Singh) and his wife Mudra Patel (Shalini Pandey) under extreme pressure from his parents, played by Boman Irani as the traditional Gujarati sarpanch and Ratna Pathak Shah, to give birth to a son – they already have a 9-year-old daughter Siddhi (Jia Vaidya). Upon learning that Mudra is again pregnant with a girl child after having gone through six miscarriages, Jayeshbhai plans a wicked idea to run away. For most part, the film is a cat and mouse chase between the couple and the men of their village. There are some lame twists, mostly predictable, some funny scenes, a few jokes that land flat and of course a lot of dramatic dialogue, which doesn’t really help the film.

Jayeshbhai Jordaar intends to give out a strong message of ‘beti bachao’ (save the girl child) but then it’s not something we haven’t seen earlier. TV show Na Aana Is Des Laado was on air for over three years and made quite an impact without lacing it with needless humour. In Jayeshbhai Jordaar, there’s a parallel subplot about a town in Haryana called Laadopur, full of wrestlers led by Puneet Issar, where the arrival of a girl child is celebrated and rejoiced. They play a crucial part in the film’s storyline and instantly reminded me of this TV show.

Director Divyang Thakkar, who has also written the story, somewhat loses track in between of what exactly he wants to accomplish through the film. He mixes a lot many things and after a point, they start to look like a clumsy mashup failing to stay focused. The first half of the film is extremely lazy both in terms of story and screenplay. It’s only in the second half that the film picks up and you want to know, ‘okay, what’s next’. I’d like to give some credit to Namrata Rao for crisp editing and finishing it off in bearable two hours runtime.

Ranveer is full of energy yet again, though I was looking forward to a somewhat understated performance in this one for the kind of subject the film is dealing with. He acts funny, then emotional, then mature – that balance works for me. Watching him dancing on the track Firecracker in the end credits was a treat, no matter how ridiculous he looked doing those steps which remind you of Jethalal from Tarak Mehta Ka Oolta Chasma. Shalini Pandey, who we saw as a demure and timid lover in Telugu film Arjun Reddy (which was later remade in Hindi as Kabir Singh), is impressive in parts. Sadly, you never see her character arc growing beyond a point. She gets limited scope to perform and you’d want to see much more of her, but that never happens. Boman and Ratna both play their parts with brilliance and that’s where experience shows. Amid all this, child actor Jai Vaidya, who made her debut as Ranveer and Shalini’s onscreen daughter, steals the show. She is fabulous in the film – her wit, confidence, spontaneity, expressions, everything is on point.

Overall, Jayeshbhai Jordaar is a decent watch but does it really stay with you and leaves you thinking? I doubt. At least, I’m not thinking about it once I am done writing this review. Watch it for this child actor and a yet-another loud act from Ranveer.