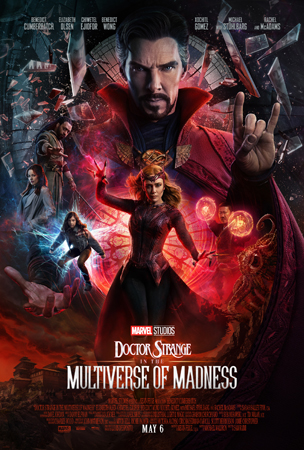 The first “Doctor Strange” film introduced an idiosyncratic character by means of an apt cinematic peculiarity, but its sequel, “Doctor Strange in the Multiverse of Madness,” squeezes the character into the Marvel franchise by trimming away all the whimsy. The strength of the first “Doctor Strange” is the embrace of its protagonist’s weirdness, which enshrines him among the franchise’s fictional personalities. The sequel is conservative: the weirdness is reined in, and the narrative’s symbolic loose ends are replaced by chains that bind it to other characters and story lines from the Marvel stable. (The same fate befell the giddy “Ant-Man” in its sequel.) “Doctor Strange in the Multiverse of Madness” eliminates the playful idiosyncrasy in the interest of formula-of Marvel’s self-perpetuating business. The new film isn’t merely branded entertainment; it’s branding as entertainment.

In “Multiverse of Madness,” Stephen Strange (Benedict Cumberbatch), a former neurosurgeon who lost his dexterity in a car accident but gained magical powers, has an apparent nightmare involving his effort to rescue a teen-ager named America Chavez (Xochitl Gomez) from the clutches of a monster that threatens to tear her limb from limb. The nightmare turns out to be an alternate reality, because America has the superpower of travelling from universe to universe (and dreams are portals-so much for Freud). She initiates Strange into the theory of multiverses, and he gets firsthand experience of them soon enough, when, as a guest at the wedding of Christine Palmer (Rachel McAdams), a doctor and former colleague whom he loves and hoped to marry, he observes another monster on the rampage in downtown Manhattan. Leaping off a festive balcony, he flies into battle. It turns out that Wanda Maximoff (Elizabeth Olsen), a.k.a. the Scarlet Witch, so craves to be reunited, in an alternate universe, with her two young sons that she tries to take America’s power (and, yes, the script is filled with such double-entendres). She is prepared to kill the girl and to lay waste to multitudes. Neither reason nor moral suasion can deter Wanda from her dastardly mission; thus Strange, his longtime ally Wong (Benedict Wong), Christine, and America herself have no choice but to challenge the all-powerful sorceress in cataclysmic combat.

Along the way, Strange encounters and battles a host of other Marvel characters, notably, the members of a secret society called the Illuminati that includes his friend and nemesis Karl Mordo (Chiwetel Ejiofor) and other delegates from such a wide range of Marvel properties that they might as well wear nametags and do team-building exercises. The film is promotional and functional. It’s an omnium-gatherum of the company’s movies, series, and comics-an attempt to advertise these properties and prop them up as required viewing to understand the action. (Fear not: you can understand everything just fine even if you’ve missed “WandaVision” and “Inhumans.”) It’s also a blueprint for the building-out of subsequent productions involving these still-underdeveloped assets. The elaborate alt-worlds conceit plays a similar multiple role. It eliminates all definitive results from the dramas of Marvel franchise products-a mercantile cheat that already reared its head when Thanos’s murder spree at the end of “Avengers: Infinity War” proved reversible. And, of course, it multiplies the potential number of properties and story lines that popular characters can anchor.

Yet these principles of script construction-packing it with the footnotes of story lines and characters from other properties and planting them in a multiverse scheme-does the opposite of freeing the protagonists and their dramatic possibilities. Strange, America, Wong, and Wanda are reduced to minimally defined, maximally manipulated action puppets whose behavior oscillates within such a tight and narrow realm of interconnections as to efface the vestiges of humanity and the complexity that their inner and outer struggles imply. The dialogue is reduced to ponderous proverbs and telegram-like declarations. The action sequences-the key source of pleasure in the first “Doctor Strange”-reduce the wonder of the earlier film’s inspirations to pro-forma gyrations and transformations. Scenes of mass destruction that should be terrifying and agonizing seem facile and flip.

The involvement of a stylish horror-film director, Sam Raimi, in this tawdry slog of corporate constraint is as fascinating as it is disheartening. His directorial personality is put to superficial, all-too-conspicuous use in the movie’s later sections, which tease out horror-centric tropes-both mildly gory ones, such as a neck snap (parallel to the one in the superhero-proximate “Everything Everywhere All at Once”) and a decapitation, and classic ones from zombie films, notably the blood-spattered Scarlet Witch’s lurching gait and the decomposed monstrosity of an alt-universe undead Doctor Strange. The very absurdity of the horror trope on which the entire movie depends-Wanda’s colossally murderous rage, as a multiverse-scaled mother-outlaw-has an element neither of camp nor of parody. Rather, it plays like a sanctimonious Disney paean to family and maternity, in which Raimi’s art of expressive exaggeration is submerged.

But there is one sequence that feels like it was created by a person rather than concocted by committee, that embodies a point of view and a sincere sense of wonder. It arrives early, surprisingly, as part of the seemingly rote and obligatory exposition. Moments after an absurdly destructive downtown battle with a monstrous giant cyclopian octopus, Strange and Wong join America at a pizzeria, where she details the multiverse system. Raimi’s visual sensibility there is manifested in wide-eyed, candidly inflected closeups that convey his own attentive fascination at the strangeness of simultaneously existing multiple worlds and characters’ multiple identities. The slight scene thrums with the potential of a mighty work of speculative imagination-which, of course, the rest of the film, squeezed into the narrow and infantilized franchise mold, doesn’t come close to realizing. Early on, Raimi seems to declare that the most expressive and far-reaching “Doctor Strange” film that he could make is a film in speech-a talk-superhero movie, similar in texture and format to the work of the Coen brothers and Richard Linklater.

No, Disney didn’t pony up two hundred million dollars for a movie shot at café tables-but it’s nonetheless a movie gleefully implied at the core of the superhero genre. Such a movie, in which talk provides the action, would prove that those who take the comic-book stories seriously can love the telling as much as the showing, the dramatic intricacy as well as the superspectacle, the ideas as well as their effects. Such films would be possible if only the characters and stories whom it would involve were not kept under the studio’s lock and key.

Fans and even scholars have claimed that comic-book franchises are modern myths-so have critics who bend over backward to justify the ubiquity of superhero films. The claim is undone by the lockbox of copyright that prevents filmmakers and artists of any sort from issuing their own takes on these stories and characters. (The Greek tragedians had no such trouble when they dramatized tales from Homer.) If superhero stories were modern myths, their makers would welcome the open-source freedom to reimagine the tales of Marvel and DC. Instead, corporate studios transform these stories into quasi-religious texts that are pharisaically protected by copyright from heretical reinterpretation and innovation-in other words, fan service. The proprietary control of such popular stories exalts the very state of unfreedom that it embodies; viewers are conditioned to see the commercial considerations of corporate control as the natural condition of art. In this regard, the current dominance of franchise and blockbuster cinema isn’t a betrayal of the classic Hollywood heritage but merely a distillation and intensification of its essential practices. Insofar as the studios keep control of the stories in their own hands, their view of the tales should be considered not myth but dogma, not interpretation but propaganda.