‘Top Gun: Maverick’ Has a Secret Weapon Even Its Makers Didn’t Know About: A Great and Timely Villain 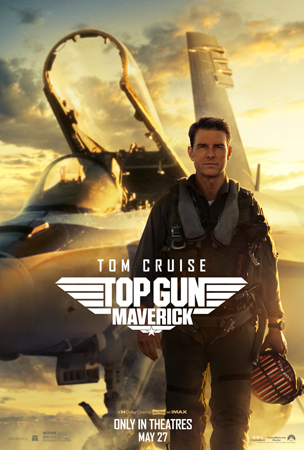 The striking if not really shocking success of “Top Gun: Maverick” is built around the simple fact that it’s an exquisitely executed blockbuster. It seems to have everything a commercial retro action movie would need: a prime movie star – one of the only ones left – who still knows how to fold a movie around his image; jaw-dropping aerial-combat sequences that blow away any hint of green-screen fakery (because those are real actors lifting off and flying); the kind of ’80s nostalgia that, at this point, is almost too potent to call mere nostalgia – it’s more like nostalgia for nostalgia; a story just good enough to pluck every carefully planted heartstring of authority-figure-vs.-cocky-upstart, Tom Cruise-is-old-but-still-master-of-the-game resonance; plus the haunting presence of Val Kilmer (though it would have been even better if they’d let him speak in his own damaged voice). Of course, what good would an action movie be – one that’s all about the interface of 1986 and 2022 – if it didn’t also have a great villain? “Top Gun: Maverick” has one. Yet that villain is never mentioned. In fact, it’s not in the script. The filmmakers didn’t even know about it. Yet you can feel it as you watch the movie, lurking in the shadows. It’s Vladimir Putin’s Russia.

All you need to do is connect a few dots. Capt. Pete “Maverick” Mitchell is training an elite squadron to attack a weapons site – basically a hole in the ground they have to zoom under the radar and bomb with pinpoint precision, much as the heroes of “Star Wars,” in 1977, had to target a rare vulnerable spot in the Death Star to blow the thing to smithereens.

In “Maverick,” no one says the word “Russia.” On the contrary, it’s obvious that the filmmakers were bending over backwards to make the whole standoff as politically neutral and non-topical as possible. But to root the film in something that resembles the real world, they slip in one telltale word: NATO. The Top Gun team is on a mission to protect NATO. That seems – or must have seemed, when “Maverick” started shooting four years ago – like a relatively safe sphere of actuality for the movie to invoke. But the meaning of NATO, since the war in Ukraine began, has changed. The alliance was always vital (even as some argued that it had become irrelevant). Now it’s the living epicenter of global conflict.

But why does “Maverick” invoking NATO automatically invoke Russia? For that, you have to connect one more dot: the original “Top Gun.” That movie climaxed with a battle against Russian MiGs. Sure, Tony Scott’s film was a joystick popcorn combat thriller, with speed and bravado and rivalry and occasionally homoerotic male bonding at its core. But it was also a movie that made a point of mirroring the Reagan administration’s ratcheting up of Cold War tensions. That was part of its package, part of what gave the flyboy action its righteous zeitgeist edge. That’s also part of why critics didn’t like it. So yes, Russia was very much part of the first “Top Gun.” It was deliberately left out of the second “Top Gun,” but reality had another idea. I’m not trivializing the war in Ukraine. That’s an impossibly horrific and profound human tragedy; “Top Gun: Maverick” is just a summer movie. But movies are about real things. Hollywood movies trivialize tragedy all the time, from world wars to 9/11 to the specter of American racism. As you watch “Top Gun: Maverick,” the (unintentional) effect of the war in Ukraine is to take this utterly fun and disposable military-attack thriller and enrich the stakes of what you’re watching by saying to the audience, “Yes, in its live-video-game way, this movie is rooted in something real.” Maybe we would have pretended that anyway. But given the current world situation, we don’t have to pretend nearly as hard.

In 1986, I was one of the many critics who dumped on “Top Gun” for a whole host of reasons – it was music-video filmmaking! Don Simpson and Jerry Bruckheimer were hack producers who had brought an over-adrenalized aesthetic (one that didn’t seem entirely unrelated to Don Simpson’s cocaine habit) to Hollywood! All that flyboy preening!

Yet most of all, I think we critics were pissed off at the idea that the high-concept saber-rattling of the Reagan administration had, with one film, become the high-concept movie demagoguery of the ’80s. Reagan’s whole problem as a leader (well, one of them) is that he was an entertainer who viewed “the real world” as a kind of Hollywood projection. Now here was Hollywood, projecting Reaganesque Russia-baiting onto the pop-cultural landscape, implicitly helping the administration transform reality into entertainment. And all to sell movie tickets! No one thought that Simpson, Bruckheimer or Tony Scott were secret right-wing hawks. Yet the very fact that they weren’t, that they made “Top Gun” as a feature-length Navy recruitment commercial out of sheer youthquake opportunism, somehow felt even more contemptible.

That was the line, at any rate. But three years later, after Reagan was out of office, I watched “Top Gun” again, on the small screen at home. What I discovered, away from the heat of the mid-’80s, was that it was a terrifically well-made and engaging movie with deeper roots in Old Hollywood than I thought. Bits of it were kitsch, but it was sleek and exciting, and the journey taken by Tom Cruise was real. A movie like that needed a villain, and the filmmakers had chosen Russia. I thought to myself anew: Why not? Should they have chosen Bulgaria or Thailand? The U.S.-vs.-Russian-MiGs climax of “Top Gun” gave it a kick of urgency. It was, I believe, a kind of reflexive fading-embers-of-the-counterculture moralism that led so many of us to kick the film in the shins for that reason. That consciousness is still around; it’s why a number of critics have risen up to declare that “Top Gun: Maverick” – with its villain practically airbrushed out – is superior to the original “Top Gun.” Please! The dogfight scenes are more technologically advanced, but “Top Gun” had a rush, a romance, a total emergence out of its time. And the evocation of all that is so much of what audiences are digging about the new one. Sure, a sequel can improve on its source, but “Top Gun” bad! “Maverick” good! doesn’t make any sense. The new movie isn’t better. It’s a beautifully honed action movie that replays our collective affection for “Top Gun” with rousing echoes of a different America. And that allows Tom Cruise to portray Maverick with an added layer of commentary on his own aging-but-still-vital stardom.

What we didn’t know in the summer of 1986, when “Top Gun” ruled, is that the ramped-up tensions between the United States and Russia were the beginning of the end of the Cold War.