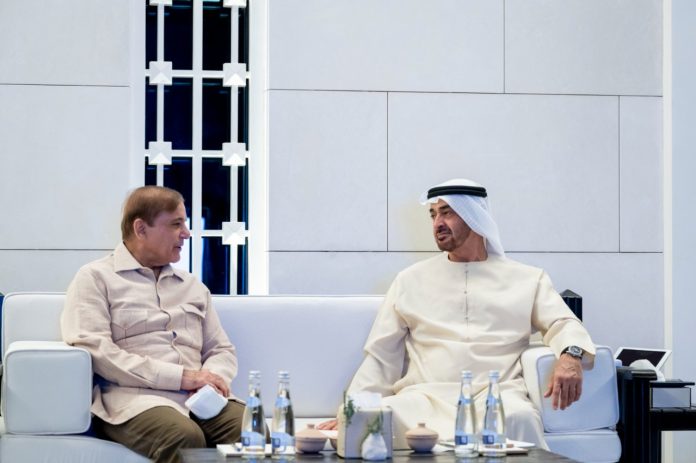 ABU DHABI: Pakistan and the United Arab Emirates have resolved to further strengthen trade and economic relations by accelerating cooperation and developing partnerships in the fields of investment, energy, infrastructure and agriculture.

The bilateral relations were discussed during the meeting between Prime Minister Shehbaz Sharif and Sheikh Mohamed bin Zayed Al Nahyan, Crown Prince of Abu Dhabi and Deputy Supreme Commander of the UAE Armed Forces the other day.

The prime minister, along with a high-level delegation reached Abu Dhabi at the conclusion of his three-day visit to Saudi Arabia.

The crown prince congratulated the prime minister on the assumption of the office and extended good wishes for dispensation of his official duties as well as for the prosperity of the people of Pakistan.

The prime minister paid tribute to the services of the founder of the UAE Sheikh Zayed bin Sultan Al Nahyan for laying the foundation of strong Pak-UAE relations and reiterated his government’s resolve to further strengthen the ties in light of the late UAE leader’s vision.

Citing historic development as well as the completion of the UAE’s first 50 years of founding, the prime minister congratulated the leadership and the people of the UAE and expressed his good wishes for more success in the
future.

Prime Minister Sharif congratulated the UAE leadership and the team over successful holding of the 2020 World Expo.

He also thanked the UAE leadership for continuous support to Pakistan at bilateral as well as international forums, particularly the UAE’s projects of public welfare in Pakistan and cooperation during the COVID-19 pandemic.

The prime minister also thanked the UAE leadership for hosting 1.7 million Pakistani diasporas which had been playing a role as a bridge between the two countries.

While highlighting the efforts of Sheikh Mohammed Zayed Al Nahyan to eradicate polio, the prime minister also appreciated the fullest cooperation by the UAE in the global efforts to get rid of the disease.

The Abu Dhabi crown prince assured for his support to strengthen the bilateral relations for the betterment of the future generations.

Acknowledging the constructive role of the Pakistani diaspora in the UAE’s development, the crown prince said the Pakistani expatriates had been playing their role since the days when there had been a limited number of people from other nationalities in the Emirates.

Exchanging views on regional and international issues, both the leaders agreed to remain in constant contact for developing a joint strategy on the issues of mutual interests, at the United Nations, the Organization of Islamic Cooperation and other multilateral forums.

This was the prime minister’s first visit to the Emirates after the assumption of the office.