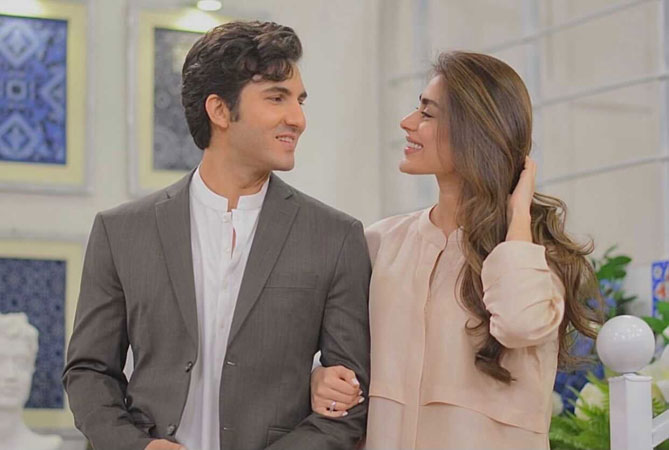 Pakistan’s much-adored model and actress Sadaf Kanwal sparked pregnancy rumours after she appeared on a game show with her husband Shehroz Sabzwari on Tuesday.

Sadaf and Shehroz, whose romance made the rounds on social media back in 2019 and got married one year later in an intimate affair, appeared on a TV show last night as a pleasant surprise to their fans.

As the host of the show welcomed Sadaf to the stage, but love proved to be a gentleman as her husband Shehroz could not help shouting ‘Aram se’ ‘Aram se’, setting tongues wagging.

As soon as Sadaf appeared on the screen, walking inside the arena quite carefully, the small clues gave away the untold story. The clip soon went viral and fans began to speculate that she was expecting.

The 28-year-old showbiz star’s gestures, her body language and the way she kept adjusting her outfit made it quite apparent that the model was trying to hide something.

Kanwal was looking drop-dead gorgeous in a brown dress. Her outfit, which the model picked from her own label, took the spotlight. She paired it with the matching organza dupatta which she smartly layered on her shirt to cover her.

Kanwal has developed her own niche in showbiz world and has been nominated for several awards including Lux Style Awards and Hum Awards.

However, Sadaf and Sheroz have not revealed anything about extending family, but fans and friends are speculating that they are expecting their first baby together.