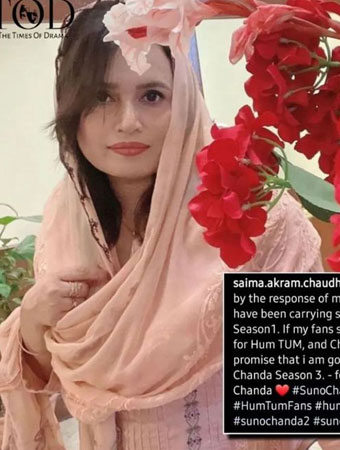 Saima Akram Chaudhry has been the master mind behind blockbuster drama series like “Chupke Chupke”, “Suno Chanda” and “Ishq Jalebi”. All of her dramas made a huge fan following but Suno Chanda broke viewership records in the history of the Pakistani drama industry.

The wonderful story was directed by none other than the very talented Ahson Talish. The lead roles were played by Iqra Aziz and Farhan Saeed, fans loved their on-screen chemistry.

Following the success of season 2, netizens bombarded Saima’s DM, asking her about season 3. The writer had to come and address Suno Chanda.

The queen took to social media and expressed gratitude “I am so overwhelmed by the response of my fans. This is the love I have been carrying since Suno Chanda Season 1”, she wrote.

She further promised Season 3 for the super hit Suno Chanda, considering the amazing response and request of the fans.

“If my fans showered the same love for Hum Tum, and Chaudry & Sons, this is my promise that I am going to write Suno Chanda Season 3”, she concluded the note by expressing love for Suno Chanda along with a heart emoticon.