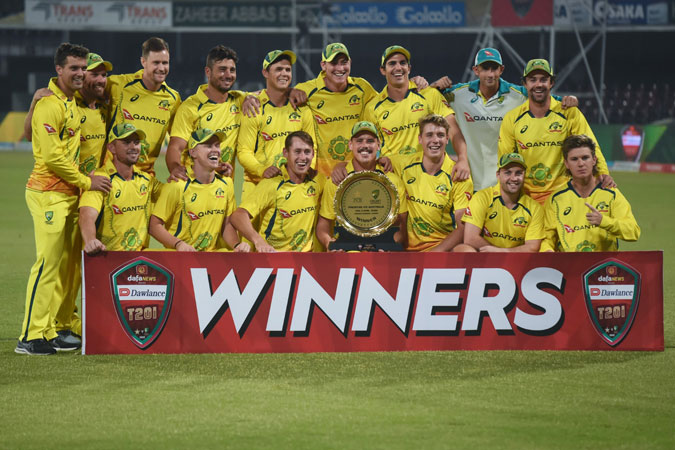 LAHORE: Australia concluded their historic tour of Pakistan in 24 years on a winning note when Aaron Finch and his charges defeated Babar Azam and his men in one-off Twenty20 International by three wickets at Gaddafi Stadium here on Tuesday night. Chasing victory target of 163 in the lone T20I, Australia raced home for the loss of seven wickets in their allotted 20 overs. Finch returned to form with a half century, scoring 45-ball 55 to help Australia overwhelm not that difficult target. Finch, who had not scored a half century in his last 14 T20Is, made sure to remove doubts over his batting form which had been under the scanner. After Finch ‘s departure, Australia needed just four runs and despite Sean Abbott fell for zero in the same Shaheen Shah Afridi over, Ben McDermott hit the winning boundary in his 19-ball 22 not out to achieve Australia’s fourth successive win in T20Is against Pakistan. Finch, who hit six boundaries, put on a brisk 40 for the opening stand with Travis Head (14-ball 26 with three fours and a six) and another 44 for the second with Josh Inglis who made 15-ball 24 with two fours and a six. Fast bowler Shaheen took 2-21, leg-spinner Usman Qadir claimed 2-33 and pacer Mohammad Wasim picked 2-30.

After the match, Finch said he never doubted his batting form would return after his knock drove an inexperienced side to victory over Pakistan. “I knew I could play a bit,” the 35-year-old said. “I always had confidence, I always had faith. It’s one of those things that you go through, some lean patches at times. Everyone can seem to panic, and as people get older people panic a little bit quicker.” Finch was one of only three players from the Australia team that won the T20 World Cup in the United Arab Emirates last year to play in the match after COVID-19 infections, injuries and the resting of players weakened the squad. Marnus Labuschagne, Ben Dwarshuis and Cameron Green were all awarded their T20 debuts on Tuesday. Finch’s team will not have long to wait to defend the World Cup with the next edition set to take place in Australia in October and November. The captain was unconcerned that the hosts have only six T20 internationals lined up before the tournament starts, given the experience in the squad when everyone is available.

Earlier, asked to bat first, Pakistan rode on a 46-ball 66 by skipper Babar but a middle-order collapse and some fine bowling by Australia pace bowler Nathan Ellis (4-28) meant they eventually fell short of a challenging total with 162-8 in 20 overs. Babar smashed six fours and two massive sixes in his knock and the 27-year-old was well supported by fellow opener Mohammad Rizwan who made 23 before Pakistan lost their way until Khushdil Shah’s 24 and some late fireworks by Usman Qadir at the end.

Incident free tour: On their first tour of Pakistan since 1998, Australia won the three-Test series 1-0 but lost the one-day internationals 2-1 in an incident-free trip. The full-strength Australia squad were greeted by head of state-style security with hundreds of policemen and military personnel guarding their hotels and routes to the grounds. The matches passed off without incident in Rawalpindi, Karachi and Lahore and the players, despite also being under strict Covid protocols, were even able to get out for a round of golf. Pakistan are optimistic the successful Australian tour has paved the way for England and New Zealand to return after both called off series in Pakistan last year citing unspecified security concerns. Australia were able to compete when they stepped into the unfamiliar territory of Pakistan because of meticulous research and preparation that even included studying domestic match performances in detail. Babar stood tall in all three formats but his 425-ball, 607-minute, career-best 196 to save the second Test in Karachi was an epic. Two years after his last Test century, his extraordinary display was the highest fourth-innings score by a captain in history. There was no let-up in the ODI series as he smashed back-to-back hundreds in the last two matches in Lahore to lead Pakistan’s come from behind 2-1 victory.