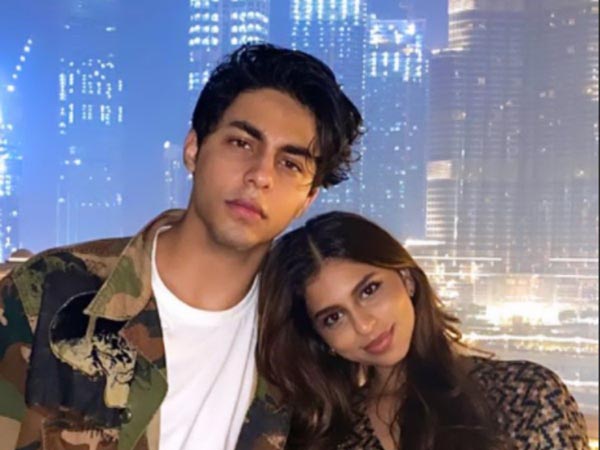 Aryan Khan and Suhana Khan are undoubtedly among the most popular Gen Z star kids in Bollywood.

Shah Rukh Khan and Gauri Khan’s children Aryan and Suhana have not made their movie debut yet. However, they have been certainly a part of the limelight. Any picture or news related to the sibling duo instantly grabs fans’ attention and goes viral on social media in no time. While browsing the internet, we came across an old picture of the star kids shared by their close friend Ananya Panday, where they can be seen arm wrestling with each other.

Ananya Panday shared the picture on her Instagram space on 31st August 2014. In the photograph, we see young Suhana and Aryan arm wrestle in what looks like a restaurant. BFFs Ananya Panday and Shanaya Kapoor can also be seen in this priceless photograph. Sharing this snapshot, Ananya captioned it, “Faaavvvess”. Aryan, Suhana, Shanaya, and Ananya also engage in funny banter in the comments section. One of Ananya’s comment read, “@suhanakhan2 DID YOU EAT THE GIANT MODAK (heart eye emoji?” Suhana replied, “I couldn’t finish it”. To this Ananya said, “Because it was bigger than your face @suhanakhan2”.

In other news, Suhana Khan is currently busy filming for her debut Bollywood project – a Zoya Akhtar directorial which is based on The Archie comic. Khushi Kapoor and Agastya Nanda will be making their respective debuts alongside Suhana as well. Pinkvilla was the first to exclusively share details about this last year. Now, a recent report in Mid-Day has claimed that Agastya, Khushi, and Suhana will be shooting in Ooty for 40 days with a local crew and only core cast members will be flying from Mumbai.

In February, Pinkvilla exclusively learned that Aryan Khan will be debuting as a writer. According to our sources, Aryan has been silently working towards developing multiple ideas, which have the potential of being developed into feature films and web series.