* It's almost impossible not to see this vignette through the prism of 'Succession,' with Ghislaine as a precursor of Siobhan Roy, decorous daughter with no evident business skills 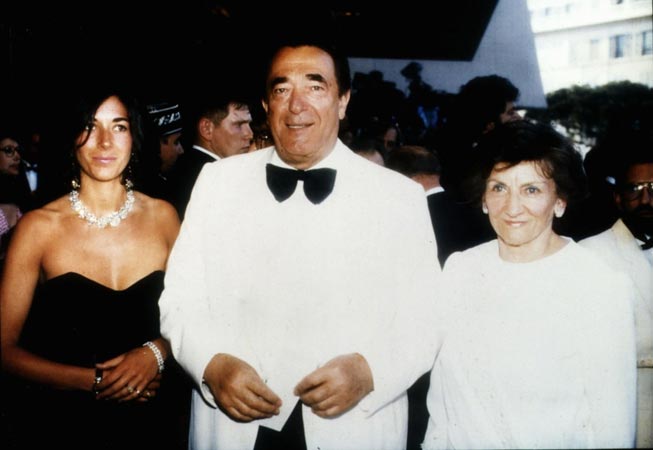 Miaow,” says Robert Maxwell. “Miaow,” replies Ghislaine. “Miaow,” says daddy. “Miaow,” says daughter. Maxwell’s longsuffering secretary, Carol Bragoli, typing nearby, hears both sides of this conversation as Robert, being a master of the universe, always had his phone on loudspeaker so lickspittles could savour every blah. The miaowing went on for minutes and, so far as I could tell, Bragoli didn’t have a sick bucket.

It’s almost impossible not to see this vignette through the prism of Succession, with Ghislaine as a precursor of Siobhan Roy, decorous daughter with no evident business skills, swanning around as though she owns the place and yearning for daddy’s validation; while daddy, when not peeing from the top-floor office of his lamestream media business on to the peasants below, barks at jellyfish underlings in his wake.

There are differences. Logan Roy never had Rupert Murdoch as his nemesis, nor did he have himself memorialised vaingloriously in stained glass as Samson bringing down the walls of Gaza in the 51-bedroom mansion he rented from the council. Nor did he arrive in Britain as a refugee in 1940, work for the KGB and MI5 and serve as a Labour MP before amassing a multimillion-pound fortune. Most of all, Roy didn’t have a favourite child; still less did he name his mid-life crisis yacht after his daughter.

The opening episode of The House of Maxwell tacks efficiently between the night in November 1991, in waters off the Canary Islands, when Maxwell was seen alive for the last time on the Lady Ghislaine, and various key moments in his career. This documentary doesn’t test Ghislaine’s theory that her father was murdered, but rather assumes that Robert, disgrace closing in, slipped overboard, avoiding the shame of being found out to be, not a latter-day Samson, but a thief whose leveraged business empire was about to crumble.

Maxwell House was once an unspeakable instant coffee in the UK; now the house of Maxwell is an unspeakable if more successful brand, whose every cough, spit and miaow is to be plundered in the way Robert did with the Mirror Group pension fund. I’m not sure this series adds much to the story set out in John Sweeney’s excellent podcast, Hunting Ghislaine, other than audio recordings of panicked lackeys wondering what will happen when their master’s body is recovered. But its confident retelling of the grisly family saga makes one wonder if daddy’s example showed his children that morality is for little people. Certainly, the tale told here of how Maxwell stymied publication of Tom Bower’s disobliging biography, which dared to depict Maxwell as a black marketeer profiting from shortages in postwar Berlin, suggests how ruthless in protecting the gilded lie Ghislaine’s father was.

The series takes us from the Carpathian shtetl, in Ukraine, where Robert was born in 1923 to the Brooklyn detention centre in early 2022, where Ghislaine awaits sentencing for sex trafficking underage girls for her former boyfriend Jeffrey Epstein, and for others devoid of moral sense – although not Prince Andrew. Heavens, no.

Eve Pollard intriguingly suggests one reason Maxwell appointed her as the Sunday Mirror’s first female editor: not out of any feminist conviction, but because she was, by definition, no threat to his dreary view of life as a competition between men.

At only one moment in this opening episode does Robert Maxwell resemble a human being. Documentary film-maker Ray Errol Fox recalls interviewing Maxwell at the Yad Vashem memorial to victims of the Holocaust in Jerusalem. Maxwell spotted the name of his birthplace, Solotvina, on a wall memorialising places whose Jewish populations were murdered by the Nazis. Years before his death, Maxwell told Fox, he returned to Solotvina with his wife, Betty. “Not a single Jew was left,” Robert told Fox, as he welled up. “It was as if we never existed.”

Did his epiphany in Jerusalem prompt Maxwell to take his own life? That may seem a stretch, but Fox certainly thought it significant that Maxwell was not seen in public again after attending the New York premiere of his film. Perhaps seeing himself on screen, for once shorn of pomp and sobbing with genuine emotion, made Maxwell realise that the way he had led his life was shameful. It remains a tantalising suggestion, but the likelihood of Maxwell being unable to bear being exposed as a thief and a fraud is surely the decisive factor in explaining his death.

The key moments of Maxwell’s rise and fall seem inconceivable today. No oligarch now follows his business model of buying up newspapers from London to New York to Jerusalem. The establishment doesn’t ritually abase itself before moneyed moguls, as it did at Maxwell’s 65th birthday party, held at his rented mansion. Or maybe I’m being naive. The ennoblement of the oligarch press baron Evgeny Lebedev by grateful Conservative grandees suggests that the spirit of Maxwell lives on.