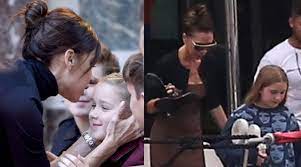 David Beckham and Victoria Beckham’s last born is giving a tribute to her mother’s pop star past.

In pictures obtained by Daily Mail, Victoria’s only girl, Harper Seven, was seen in a Spice Girls jumper during her recent family trip.

The Beckhams enjoyed one final weekend together just before the oldest child Brookly’s wedding on a yacht in Miami and the celebrity couple’s 10-year-old donned a blue outfit to appreciate mommy.

Her pullover included a theme of her mum’s face from the brilliant days. Harper was additionally joined by sibling Romeo and their parents on the outing.

Prior, David Beckham himself valued his artist spouse with a Spiceworld Christmas jumper for a merry photocall in December.

The Mail on Sunday reported: “Brooklyn Beckham is understood to have signed a prenuptial agreement with his heiress bride-to-be Nicola Peltz.

“The £380 million fortune of Brooklyn’s parents, David and Victoria, is dwarfed by the estimated £1.3 billion wealth of Miss Peltz’s financier father Nelson.

“News of the prenup comes as preparations for Saturday’s £3 million ceremony and party at the Peltz family mansion in Palm Beach, Florida, gather pace.”

It is to be noted that Harper’s cute photographs come after Brooklyn reportedly signed a highly expensive prenup with to-be wife Nicola Peltz.