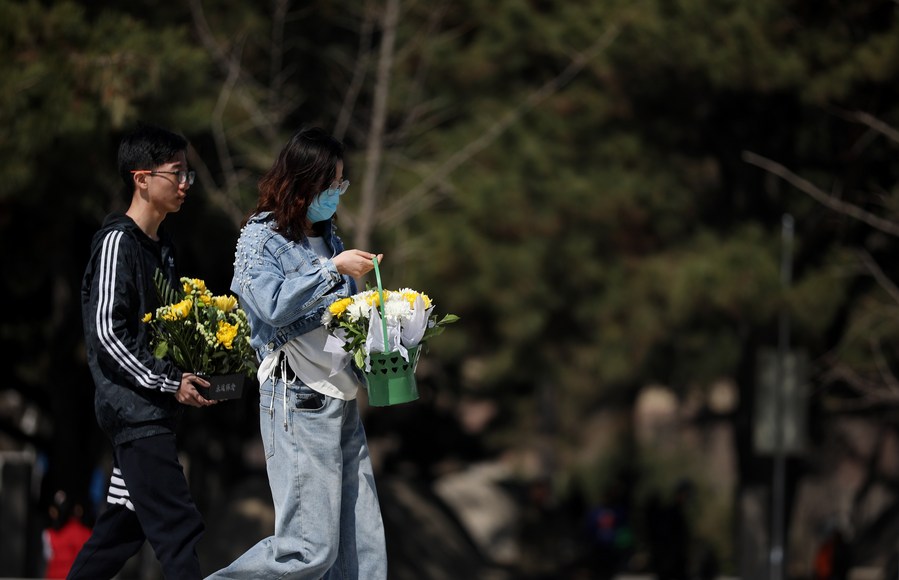 BEIJING: As Tomb Sweeping Day falls on Tuesday this year, Chinese people are preparing to worship ancestors and pay tribute to their loved ones who died.

This day is also known in China as Qingming, literally “clear and bright.” It is one of the 24 dates that divide the solar year and has been observed for thousands of years.

The tomb-sweeping tradition has its poetic twist, inspiring Chinese poets through the centuries to create verses that blend the joy of springtime with the sorrows of the mourning.

“A drizzling rain falls like tears on the mourning day; The mourner’s heart is going to break on his way. Where can a wine shop be found to drown my sad hours? A cowherd points to a cot amid apricot flowers.”

On Qingming, Chinese people also pay their respects to heroes and martyrs.

“The Chinese nation is a nation that worships heroes, makes heroes and has numerous heroes in its history. The spirit of heroes still exists in the age of peace. We must uphold the spirit of heroes, who sacrificed their lives for the Party, the country as well as the Chinese people,” Xi said.

Heroes emerge in peacetime, too. Doctors, nurses and first responders are considered heroes in the country’s fight against the COVID-19 epidemic.

At a meeting to commend anti-virus role models in 2020, Xi paid his respects to those who died fighting the virus.

“I would like to take a moment to mourn the loss of the heroes who gave their lives in the fight against the virus, and our fellow countrymen and women whose lives it has taken. Our thoughts are with them,” he said.

Poverty fighters are on Xi’s mind too. Under his leadership, China launched a “war” that eliminated absolute poverty in eight years. The battle was hard fought, with over 1,800 people — many of whom were cadres who assisted in the fight — sacrificing their lives on the front lines.

At a gathering in early 2021 to mark poverty relief results, Xi acknowledged the fallen heroes, saying that their sacrifices will “never be forgotten by the Party, the people and the republic.”

Throughout the past decade, more attention was given to heroes and martyrs. A date was designated as Martyrs’ Day. Laws and regulations were passed to better protect the martyrs’ reputation and their families’ rights and interests.

As Qingming heralds in the warm weather and regular rainy showers, it presents an opportune time for plowing and sowing.

The Chinese term “Taqing” refers to a spring outing when people get out and enjoy the spring blossoms. It is one of the most important and long-lasting customs of Qingming.

After families sweep tombs, they often take a moment to savor springtime. Activities like planting trees are usually associated with this season.

Last week, Xi and other Chinese leaders took part in a tree-planting activity in Beijing. Xi participated in this activity as China’s top leader for 10 years in a row.

Xi stressed that he also wanted to make a personal contribution to building a beautiful China and to encourage the whole of society, especially young people, to push for ecological advancement and for China’s environment to continue to improve.

“Since the 18th CPC National Congress, we have adhered to the notion that lucid waters and lush mountains are invaluable assets to fully promote the development of ecological civilization, advance afforestation and improve living environment in both urban and rural areas,” Xi said. “A beautiful China is becoming a reality.” Xinhua