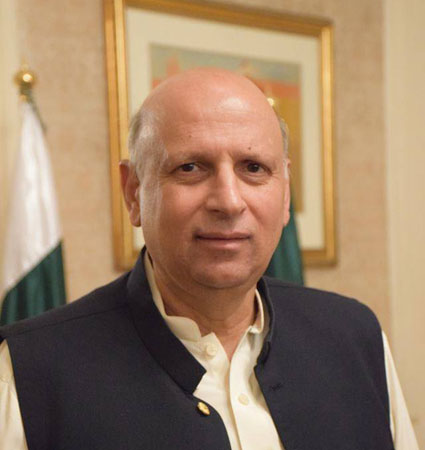 The government Sunday removed Chaudhry Muhammad Sarwar as Governor Punjab and appointed Omar Cheema in his place, ahead of election for the new chief minister.

Chaudhry Muhammad Sarwar came down hard on the PTI leadership after his removal from the office.

Addressing a press conference at Lahore shortly after his sacking, Sarwar said if there was a foreign conspiracy against the incumbent government then it was electing Buzdar as the chief minister.

Sarwar said that despite having several prominent candidates, including Fawad Chaudhry, Imran Khan decided to pick Usman Buzdar as the chief minister – as only he could move the Punjab towards the goal of “Naya Pakistan”.

“All of PTI workers – in Punjab, Pakistan – and the federal ministers complained to us whether this was the Pakistan that we wanted where the chief secretary and inspector general are changed every three months,” the former governor said.

The ex-governor said that when he had presented the proposal of resigning voluntarily, then why was there a need to dismiss him. “Shah Mahmood Qureshi and Pervez Khattak are witnesses to it.”

Sarwar said he was asked to do “unconstitutional things”. He explained that once Buzdar had resigned from his post, despite it not being approved and notified, the prime minister and PTI leadership asked him to call a session of the Punjab Assembly to elect the new CM.

“I asked them to not make me do illegal things […] I told them that they can have me resign, but I will not do unconstitutional acts,” the ex-governor said.

Minister for Information and Broadcasting Fawad Chaudhry, announcing the government’s decision, said that PTI leader Omer Sarfaraz Cheema has been appointed as the new Punjab governor.

Sources within the federal government said that Sarwar has been removed from his post on PML-Q leader Chaudhry Pervaiz Elahi’s request, for allegedly campaigning for Hamza Shahbaz in the election of the chief minister.

It is to be noted that Elahi is contesting against the Opposition’s candidate, Hamza, for the coveted slot of the chief minister.

Sources said that Elahi directly complained to PM Imran Khan about Sarwar on a phone call, after which the premier advised President Arif Alvi to remove the governor.

Moving on, Sarwar said he is being blamed for playing on both sides, but noted that he was not interested in the politics of “foul language” and warned that if he was attacked, he would retaliate.

Lashing out at the prime minister, everyone has the right to an independent foreign policy, but a country should remain within their boundaries.

“We cannot bear enmity with America […] states build relations with other countries on the economic status of others,” the ex-governor said.

Sarwar urged the prime minister to not drag international politics into domestic politics.