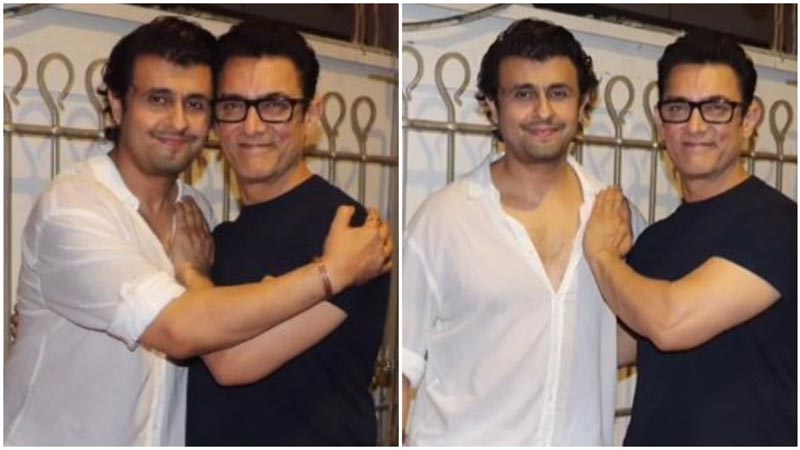 Actors Aamir Khan, Anil Kapoor, Jackie Shroff, Rohit Roy and were among those who attended the party hosted to celebrate singer Sonu Nigam’s Padma Shri win. Krishan Kumar, singers Shaan, Neha Bhasin, Rahul Vaidya, and his wife-actor Disha Parmar were also spotted at the party. In a video shared by a paparazzo account on Instagram, Aamir was seen posing for pictures with Sonu Nigam. The duo also hugged each other as they smiled for the camera. For the occasion, Aamir wore a black T-shirt, blue demins, and brown shoes. Sonu, for his party, wore a white shirt and matching pants. Last month, Sonu was conferred with the Padma Shri by President Ram Nath Kovind in Delhi. Taking to Twitter, the President’s account had shared a picture with the caption: “President Kovind presents Padma Shri to Shri Sonu Nigam for Art. A well-known singer and music director, he has sung over 6,000 songs in more than 28 languages.”

Earlier this year, Sonu in an interview with Bollywood Hungama, had said at first that he wouldn’t accept the award. He had said, “Justice given late isn’t called justice. So I said, ‘I won’t be able to accept this award’. I said ‘This is too late. You are giving Padma Shri to me now. I am past that stage of expecting and I have stopped looking in that direction already’.” Meanwhile, fans will be treated to Sonu’s songs in Aamir’s film Laal Singh Chaddha next. Speaking with Bollywood Hungama on coming aboard the film and his conversation with musician Pritam, Sonu had said, “Pritam, very nicely he said, ‘Sonu you are very special to me. I have a very special connection with you because you sang in my debut. You’re a part of my debut. I’ve much respect for you.” He had added, “I don’t want, and it happens nowadays, that a song is sung by multiple people and then one is chosen from there’. Now, this is the trend but I don’t want to be a part of that. Pritam also told me the same thing, ‘This is why I’m asking you to be a part of a song that will not be sung by any other singer’. This was Aamir’s decision that ‘Sonu Nigam will sing this song’. So since the producer and star has said, so now it won’t be that ‘Let us make Sonu also sing the song and then compare’.”