* During the Oscars ceremony, Rock, while on stage as a presenter, poked fun at Pinkett Smith's shaved head joking, 'Jada, I love you' 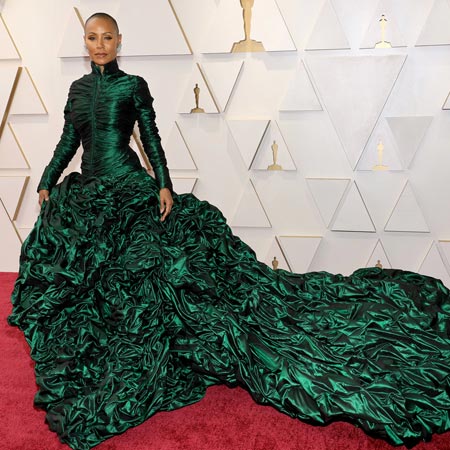 Jada Pinkett Smith has entered the chat. The 50-year-old actress took to Instagram to share a message following the jaw-dropping incident between her husband Will Smith and comedian Chris Rock at the 2022 Oscars, which took place March 27 at the Dolby Theatre in Hollywood.

“This is a season for healing,” the message, posted on March 29 with no caption, read. “And I’m here for it.”

During the Oscars ceremony, Rock, while on stage as a presenter, poked fun at Pinkett Smith’s shaved head joking, “Jada, I love you. G.I. Jane 2, can’t wait to see it, all right?.”

While the actress rolled her eyes at the dig, her husband of nearly 25 years was furious. Smith then marched to the stage and slapped the 57-year-old comedian in the face.

“Wow, Will Smith just smacked the s–t out of me!,” Rock exclaimed as the 52-year-old actor walked back to his seat.

The Fresh Prince of Bel-Air alum then screamed twice at the comedian, “Keep my wife’s name out of your f–king mouth,” while the audience gasped in shock.

Smith-who went on to win the Best Actor Award for his performance of Venus and Serena Williams’ father in King Richard-later attempted to justify his actions.

“Art imitates life, I look like the crazy father,” Smith said during his acceptance speech. “Love will make you do crazy things.”

Pinkett Smith has been open about her years-long struggles with alopecia-an autoimmune condition that can cause someone to lose their hair, eyebrows and eyelashes. The Angel Has Fallen star first revealed her diagnosis on a May 2018 episode of her Facebook Watch series, Red Table Talk, calling the experience, “terrifying when it first started.”

“I was in the shower one day and had just handfuls of hair in my hands and I was just like, ‘Oh my god, am I going bald?’,” she recalled. “It was one of those times in my life where I was literally shaking in fear…That’s why I cut my hair, and why I continue to cut it.”

In July 2021, Pinkett Smith completely shaved her head after receiving inspiration from daughter Willow Smith, who regularly rocks a bald beauty look. The actress candidly took to social media months later to show off a bald line that had grown in the middle of her head.

“Y’all know I’ve been struggling with alopecia and just all of a sudden one day, look at this line right here. Look at that,” she said in a video posted to Instagram in December 2021. “It just showed up like that and this is going to be a little bit more difficult to hide, so I thought I’d just share it so y’all are not asking any questions.”